A few months ago, a series of incidents occurred that sparked a conversation among a few of my friends and resulted in this manifesto from us about women in technology. The timing of our publication could not be more unfortunate: Rap Genius co-founder Mahbod Moghadam published thoughtless comments on Elliot Rodger’s misogynist manifesto, then Snapchat CEO Evan Spiegel’s demeaning emails from five years ago were revealed. What does this mean for women? Should we all decamp to greener pastures?

I don’t think so. If anything, it finally seems to me as if there’s a light at the end of the tunnel. For the longest time, discrimination—racial or otherwise—was something we didn’t acknowledge at all. Everyone pretended there was nothing to see or change. I entered the tech industry assuming that was the case. I went along with jokes about the capabilities of a woman because that was how it had always been. I assumed I was not smart enough to be a good programmer because I thought good programmers were always men.

Today we can call bullsh-t on such opinions when they’re expressed. Spiegel’s emails reveal what many have always thought of Silicon Valley culture: a frat party that aspires to bring about utopia. Prominent venture capitalists have gone on the record to endorse similar behavior. The emails also reflect a larger issue of how companies are run by a nondiverse set of people. Why do we have so few executives who are women, and even fewer who are African American?

Fortunately, we have powerful publications and women shining a bright light onto this murky world. The magazine Model View Culture has been doing a stellar job of highlighting discrimination of all forms that exist in technology. Shanley Kane, Ashe Dryden, Nitasha Tiku, Kara Swisher and Alexia Tsotsis have been consistently highlighting people who perpetuate discriminatory culture. We also have large companies admitting that they need to do better. Google has been admirable in revealing the demographics of their workplace. The data show there is a lot of work to be done. African Americans form about 2% of Google’s workforce, women about 30%. But acknowledging the lack of diversity is the first step in addressing the overwhelming biases that exist in the industry.

The problem of getting more people of color and women to apply for tech positions is being tackled by several organizations. Black Girls Code, Girls Who Code, Girl Develop It, Trans*h4ck and Hack the Hood are enabling people from all walks of life to learn programming and apply for positions in technology. We need to empower these organizations to continue to broaden their reach.

Being transparent about the demographics also means we can now have honest and open conversations about team culture in technology. When teams are populated by mostly men who more or less have had similar upbringings, how can women or people of color expect to fit in? Why are 54% of women leaving technology after 10 years of working in it? We need to have an honest conversation about how managers can impact and alter the demographics of a company through how they hire people into their teams.

Ultimately, Spiegel’s emails reveal more about the tech culture that embraces such behavior. These emails are not revelations from a silly incident 20 years ago but rather happened a mere five years ago, when Snapchat was being created. It reveals how Silicon Valley’s fascination with self-obsessed youth has led us down a treacherous path that is unsafe for women and people of color. There’s an urgent need to provide safe spaces for women and people of color online. On the whole, I’m witnessing consistent conversation about discrimination and diversity. My hope is that these conversations lead to significant changes in team culture, demographics and how VCs choose to fund startups.

Divya Manian has worked for more than 10 years in the tech industry, has contributed to several open source projects and frequently speaks about open web standards and web development. 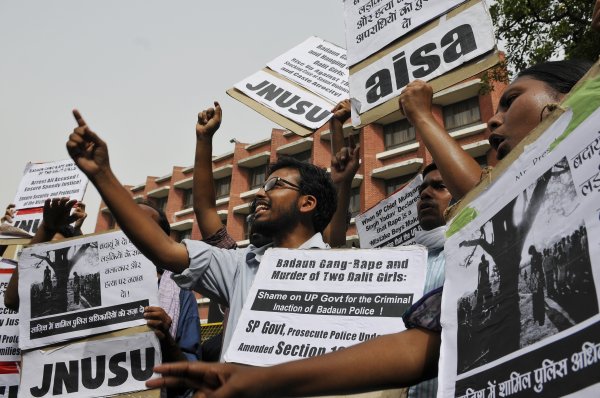 India’s Rapes Too Often Excused as ‘Boys Will Be Boys’
Next Up: Editor's Pick