Halfway through 2014, there’s already an embarrassment of riches in the realm of music — from blockbuster pop singles to epic indie ballads, ace songs from artists both new and established have provided the year with an exceptional soundtrack.

A delirious, skronking sax loop and an assist from rising Australian MC Iggy Azalea helped make this single, the first from Grande’s upcoming second full-length, a prime candidate for the esteemed title of Song of the Summer. Guest features and gassy brass aside, her vocals are the key: sweet, soaring, and unabashedly exuberant. -Jamieson Cox

Sam Smith, “Stay With Me”

It sounds simple: take the silky smooth vocals of a British crooner, add one slow-burning love song, mix in a backing gospel choir and — boom! — you have a chart-topping ballad. Yet Sam Smith manages to elevate that formula with “Stay With Me,” the sweeping third single from his debut album In The Lonely Hour. Evocative and passionate, this song will pull at heartstrings you never knew you had. –Megan Gibson

A veteran of the Toronto pop scene, Allie Hughes rebooted her career as Allie X with this gleaming piece of synth-pop. Sugary and sharp in equal measure, Allie’s cool, clean vocals distract from the brutal lyrics, which clinically outline the pain of heartbreak to devastating effect. -Jamieson Cox

Subtract the synthesizers and the electro-pop beat and this track from Mø’s debut album could easily be a Motown cover. The retro girl group vibe, undulating cheerfulness and jangly dance beat work well for the Danish electro-pop songstress — and despite the misleading title, the song is the perfect soundtrack for a sing-into-your-hairbrush slumber party scene. -Melissa Locker

Future Islands, “Seasons (Waiting on You)”

This Baltimore art-pop crew went viral in March thanks to an appearance on the Late Show with David Letterman, where lead singer Samuel T. Herring danced his way into the acerbic host’s heart and shredded his vocal chords performing this flute-flecked anthem. His moves drew clicks, but it’s his heart that makes this one of the year’s best songs to date: singing about love, loss, and lust, Herring digs deep into a life’s worth of experiences to generate an immense amount of emotion. -Jamieson Cox

Rita Ora, “I Will Never Let You Down”

Though the Roc Nation songbird didn’t dazzle on her debut LP, Rita Ora came out swinging with the first offering from her sophomore set, the Calvin Harris-produced “I Will Never Let You Down.” It’s a summer single so effulgent and brimming with vintage Whitney Houston-style pep it’s like a shot of sunshine. –Sam Lansky

From the first notes of “Blue Moon” it’s clear that Beck has left the bombast and gimmicks of Modern Guilt and Guero far behind. The atmospheric song with folksy melancholia and lush arrangements is a return to form for Beck, showing off his incredible songwriting skills. A sparsely sweeping meditation on loneliness, “Blue Moon” is disconsolate and hopeful, beautiful and haunting; it shows Beck at his best — and when he’s good, he’s very, very good. -Melissa Locker

Royskopp & Robyn, “Do It Again”

The collaboration between the Scandinavians resulted in a song — and an EP — filled with hard-driving electronic beats, soaring synths and Robyn’s inescapable pop charisma. Her emotion-filled voice lends a humanity to the robotic synths that makes the song feel personal even while pumped onto a dance floor. “Do It Again” is a smart pop song that manages to feel both gem-like and expansive, even though it clocks in at just a little over five minutes. It could be twice as long and still feel fresh. -Melissa Locker

A shocking death in Mark Kozelek’s family was the impetus behind the singer-songwriter’s raw, seven-minute monologue about finding meaning in tragedy. -Nolan Feeney

If lovelorn angst had a dance-floor ready beat, it might sound something like “Stay High.” It’s as plaintive as a pop song gets, filled with yearning vocals played over an undeniable hook and mesmerizing melody, as the Swedish pop singer divulges her recipe for getting over a breakup (the song’s title is a clue). After working as a songwriter for years, Lo recently released her debut EP, Truth Serum, on Polydor and based on the strength of the songs, it’s clear that there’s a new pop diva in town. -Melissa Locker

The Montreal funk veterans scored the biggest hit of their career to date with this slice of chugging, top-down synth-pop, anchored by a guitar line that’s built for the beach and rubber-band bass. The jealousy’s rancid enough to induce giggles, but there’s nothing funny about that chorus, which splits the difference between silly and sincere with aplomb. -Jamieson Cox

Listen up, Hannah Horvath: according to this smoked-out contribution to the official Girls soundtrack, the rising R&B star loves you just the way you are. -Nolan Feeney

Fans of K-pop juggernaut Girls’ Generation (a.k.a. SNSD) won’t be disappointed by their latest dance-friendly single, and the addition of a scratchy electronic bass line and a hint of darkness should even attract listeners who don’t dig their usual bubblegum sound. -Lily Rothman

On this cut from the Elusive Chanteuse’s 14th studio album, Carey navigates a stuttering, soulful arrangement with her typical vocal agility and lyrical dexterity. Time may have shaved a few notes from the top of her infamous range, but they’re hardly missed here: this is timeless, sweet pop, perfect for summers spent falling in love. -Jamieson Cox

Largely known for her collaborations with other pop artists, “Chandelier,” from the upcoming album 1000 Forms of Fear, marks Sia’s first solo track in five years. Yet the song — with its trippy percussion groove that swells into an explosive chorus — is a clear signal that Sia The Solo Act has arrived. The mesmerizing video also features a dance routine performed by 11-year-old Dance Moms star Maddie Ziegler, who now rivals Alyson Stoner (aka the girl from Missy Elliott’s videos) for Best Child Dancer in a Pop Video. –Megan Gibson

Against Me!, “Transgender Dysphoria Blues”

The Pains of Being Pure at Heart, “Kelly”

This deep cut from the Brooklyn indie pop group’s third full-length Days of Abandon is delicate and fluffy, like a perfect meringue. Vocalist Jen Goma rides an airy beat and finds herself swallowed by infatuation by the song’s close; this is the sound of rocks at the bedroom window, hushed phone calls in the dark, the perfect teen romance everyone dreams about. -Jamieson Cox

On his debut album Oxymoron, Schoolboy Q proved his skills behind the microphone and his ability to rat-a-tat out verses with the best of them. On “Break the Bank,” he makes it look easy to churn out a banger without relying on club-worthy beats. The Alchemist-produced track is a head-rocking, hard-knocking anthem driven forward on a flow of fiery verses. -Melissa Locker

The New Jersey indie pop crew grew up with Atlas, their wistful, autumnal third full-length; this was its lead single, which coasts along on Matt Mondanile’s golden guitar lead. A meditation on disconnection, memory, and maturity, it’s proof that getting older doesn’t have to mean becoming boring. -Jamieson Cox

Lykke Li, “No Rest for the Wicked”

Wistful and haunting, the gorgeous first single from Lykke Li’s third album I Never Learn is, if anything, a lesson in heartbreak. Though the lyrics are undeniably bleak -—”Lonely I, I’m so alone now” — the uplifting strings, crashing drums and Li’s own stirring vocals give “No Rest for the Wicked” a defiant, rather than defeated, energy. –Megan Gibson

Terje, a Norwegian DJ with a name nicked from a legendary American house producer, capped off a recent string of excellent singles this spring with his debut album, It’s Album Time. This song is the best of his new material, a churning electronic odyssey that speeds towards its climax like a robot gone rogue. -Jamieson Cox

Enigmatic Nottingham-based singer-songwriter Indiana’s single “Solo Dancing” is the year’s most hypnotic pop record, a pulsating Italo Disco-inflected bit of club candy. But while the production is straightforward, the subject matter is just ambiguous enough to up the sex appeal. -Sam Lansky

Pharrell is everywhere these days, but the drug dealers’ anthem would be fine without the “Happy” hitmaker thanks to Mike WiLL Made It’s woozy, outer-space beat. -Nolan Feeney 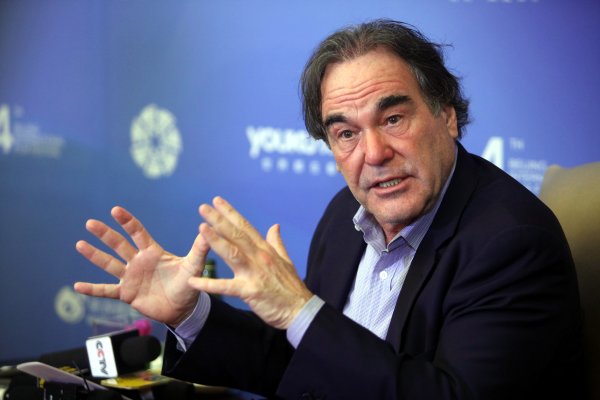 The Joy Leak Club: Stone Will Direct Snowden Pic
Next Up: Editor's Pick