The Atlantic hurricane season officially kicks off on Sunday, which means for the next six months the East and Gulf coasts of the U.S. will be on the lookout for the next big Andrew, Hugo or Katrina. As it happens, the U.S. is in the middle of a record-breaking hurricane drought. It’s been 3,142 days since the last major hurricane — defined as Category 3 or above — made landfall in the U.S. (That was Hurricane Wilma, which hit southwest Florida in October 2005 and was the most intense cyclone ever recorded in the Atlantic basin, with sustained winds of 185 m.p.h.) That’s an unprecedented streak, going back to 1900 — the longest drought before the current one was nearly 1,000 days shorter.

Don’t expect that drought to end anytime soon. The National Oceanic and Atmospheric Administration (NOAA) has forecast that the Atlantic’s hurricane season will be in the normal to below-normal range, with nine named storms (the long-term average is 12) and three hurricanes (the average is six or seven). Only one of those hurricanes is expected to reach Category 3 or higher, with sustained winds of at least 111 m.p.h. (179 km/h). NOAA says there’s a 1-in-5 chance that a major hurricane could actually make landfall along the East Coast — and not a Katrina in the bunch.

One of the reasons why the Atlantic hurricane season is forecast to be so mild is because of something happening in the Pacific, thousands of miles away. Scientists are predicting that we have a better than even chance of developing an El Niño event within the next six months. El Niños occur when the waters of the equatorial Pacific undergo unusual warming, which in turn affects atmospheric circulation and weather around the world. That includes hurricanes in the Atlantic: El Niño increases the strength of westerly winds across the Atlantic, which creates a lot of wind shear. (Wind shear is the difference between speed and direction of wind over a short distance.) That high wind shear can disrupt tropical storm systems before they’re able to gather a lot of power, which makes it difficult for major hurricanes to form.

El Niño isn’t always good news for storms — hurricanes actually get stronger in the eastern Pacific during El Niño years. And the eastern Pacific hurricane season, which began on May 15, has already seen its first storm — Amanda, which attained maximum wind speeds of 155 m.p.h. (249 km/h), making it just below a Category 5 hurricane. It also makes Amanda the strongest eastern Pacific storm ever recorded in May, which doesn’t bode well for the rest of the season — and especially for the west coast of Mexico, which bears the brunt of those hurricanes.

And there’s no guarantee that the skies will stay quiet over the Atlantic either. Hurricanes don’t have to be Category 3 or above to cause major damage. Sandy was barely a Category 1 hurricane by the time it made landfall in the Northeast in October 2012, yet its sheer size and rainfall — as well as the fact it squarely hit the most populated section of the country — caused nearly $70 billion in damage. And previous El Niño years saw strong storms, including 2004, when four strong hurricanes hit Florida, and 1992, when Hurricane Andrew caused $26.5 billion in damage. After all, as NOAA Administrator Kathryn Sullivan said last month: “It only takes one destructive storm to make for a very bad season.” 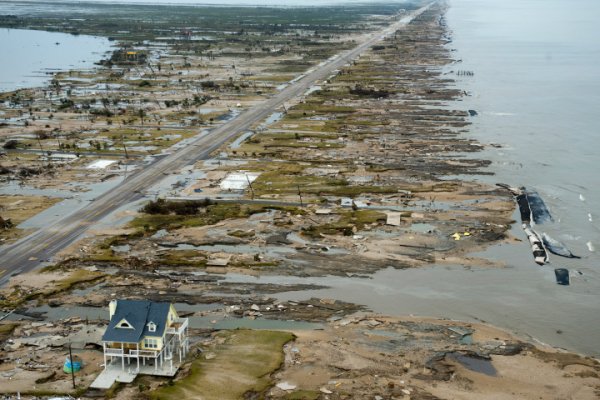 The Most Destructive U.S. Hurricanes of All Time
Next Up: Editor's Pick