Oh, Google. You think you’re so smart with your steering wheel-less, pedal-less, driverless car, don’t you? “Look, guys, no hands!” But we’ve got news for you: You’re not the only transportation innovation game in town.

Here are six other ways tech is—or could—totally revolutionizing the way we get from A to B:

Tesla Model S electric cars to be delivered are parked at a charging station in Beijing on April 22, 2014.
Chen Boyuan—Imaginechina/AP

Ah, the Tesla. I mean, fine, you can’t plug in your office’s address on the car’s touchscreen then get caught up on Game of Thrones while being whisked away to work. But let’s call this thing what it is: A spaceship on wheels. Or, as Internet comic-man Matthew Inman put it: “An Intergalactic SpaceBoat of Light and Wonder.”

The Tesla Model S is all-electric, can do 120 miles an hour and hit half that speed in just under six seconds when starting from a standstill. The exterior is among the sleekest car designs ever made, while the interior will make you feel like Captain Picard (or Kirk, or Janeway, even, your call). And the thing isn’t even all that expensive, compared to other cars of its caliber—about $70,000 for the base model before a slew of government incentives bring that price down even further.

Terrafugia's prototype flying car, dubbed the Transition, during its first flight, May 23, 2012.
Terrafugia/AP

About six seconds after the first car was invented, some passer-by said “hey, that’s cool. But can it fly?” And we’ve been trying to make flying cars ever since, to almost no success.

But one company insists it’s got the answer: Terrafugia, makers of the Transition, which is really more a plane that also happens to drive rather than vice-versa. It’s a good start, but the project’s been mired by delays. There’s also nothing easy about getting a pilot’s certificate, required to fly the Transition—it took this writer 10 months and 60 hours of flight time to manage that goal, meaning we’re bound to see more Cessnas than flying cars buzzing around over our heads for the foreseeable future. But still, the Google Car? Can’t fly. Sucker.

Look at this thing. Just look at it. Sikorsky gave its most mad-genius helicopter designers $50 million and told ’em to go nuts. And go nuts they did. The X2 fits only two people, but they’ll be in for the ride of their lives—this sucker does a clean 250 knots of forward speed, or just under 300 mph. By comparison, the average news chopper does about 140 knots, and the Army’s Cobra attack chopper does 190 knots. And the Google Car only does like 25mph. Pfft.

The lesson here? If you gotta outrun a Cobra, buy a Sikorsky X2. You’ll also need a helicopter license and a boatload of money, so this thing really has a target market of pretty much just Michael Bloomberg.

Another option for the monied set. Uber toyed around with UberJET recently, which let folks use an app to request a private flight at the Cannes Film Festival for about $9,000. Uber does promotional stuff like this all the time—it’s not really serious about regularly offering UberJET, but other companies like Atavis are. Why bother messing around with driverless cars when you can have a professional pilot fly you above all that nasty traffic?

JetPack Man flies through the air and onto the frontstretch prior to the NASCAR Sprint Cup Series AAA Texas 500 at Texas Motor Speedway on Nov. 6, 2011 in Fort Worth.
Jerry Markland—Getty Images

Alright, James Bond wannabes: You’ve wanted your own jetpack since Thunderball, but it’s always felt just out of reach. Not anymore. Martin Jetpack was recently awarded a flight certificate for its twin-engine backpack-that-turns-you-into-Superman. And this thing works! There’s video! It flies! It’s also pretty sweet-looking, and would actually go great with a Google Car. In fact, Google should just go ahead and buy Martin so they can offer a combo-deal and stash one of these bad boys in every Google Car’s trunk. Too much traffic to get to work on time? No problem. Woooooosh.

No, you can’t drive data—unless you’re on the information superhighway (I’ll be here til next week, folks, try the veal). But imagine if city bus officials knew when the most riders were waiting at which stops and planned their routes around that? Or if a subway could know there’s nobody who wants to get on or off at the next stop, so it could skip it entirely? Or if every car on the road was talking to one another, helping to prevent accidents, as commercial aircraft do? We’re already headed in data’s direction—and that, not any one new car or aircraft, is going to truly revolutionize transportation.

But driverless cars are neat, too, Google. 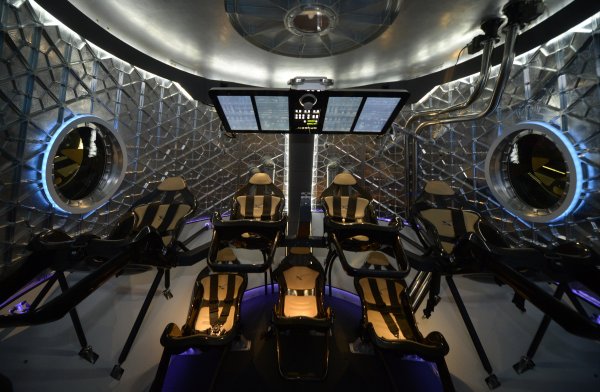