Interactive: How Influential Is Your School?

For the next three weeks, many American universities will be measured up exclusively by the strength of their basketball programs. But for those less impressed by “a group of pituitary cases trying to stuff a ball down a hoop,” as one Annie Hall player once put it, TIME has devised an alternate way to score schools: by the influence of their alumni.

To start, we rounded up the 107,408 living people whose Wikipedia profiles list at least one alma mater in the U.S., and scored each according to the length and breadth of his or her page on the site—the bigger the number, the greater the influence (more on that below). Then, we added up each school’s alumni scores to get its overall influence factor. Check it out: 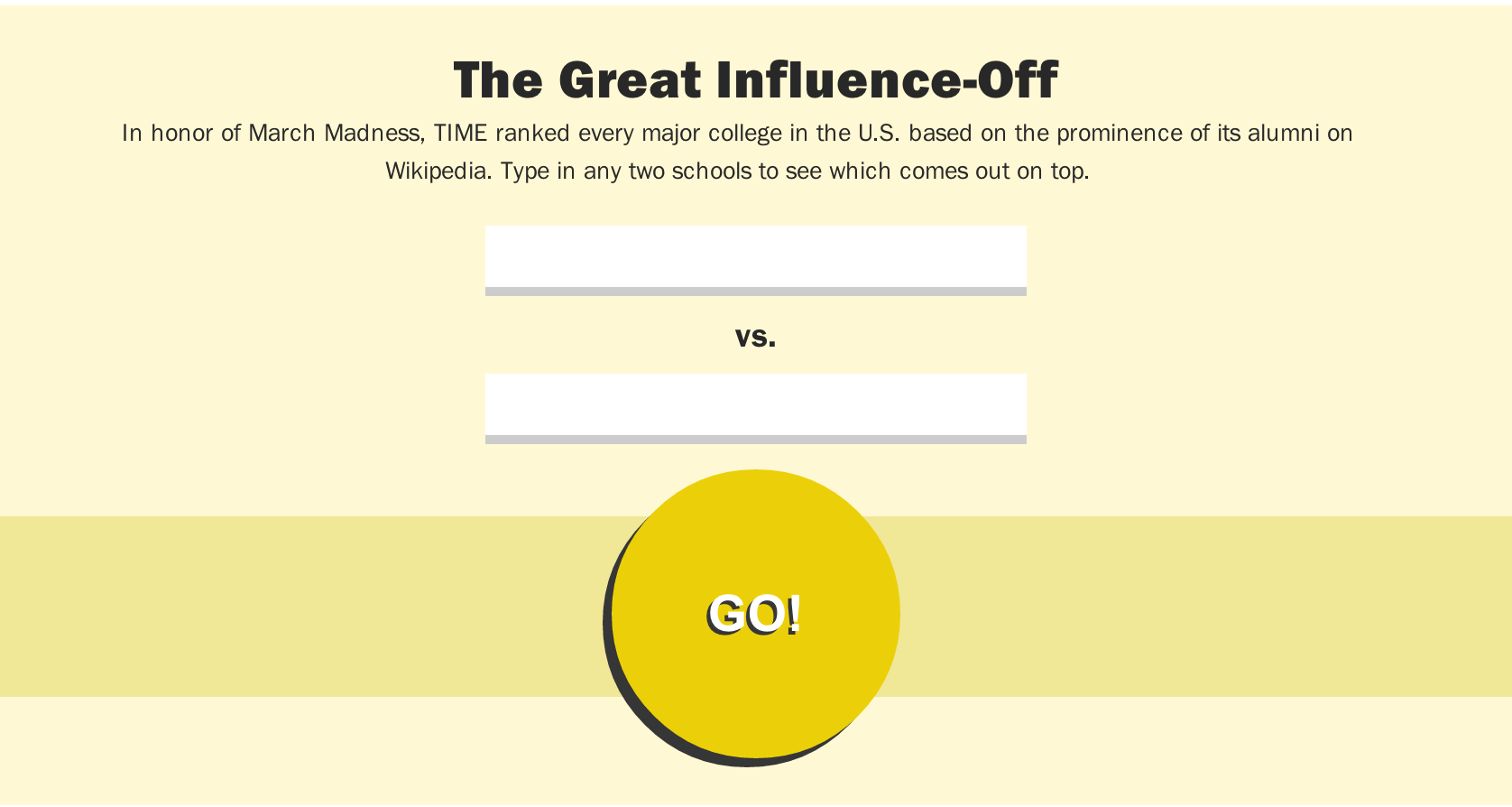 Some of the more interesting results run counter to what you’d expect from traditional rankings, including:

Wikipedia offers an exhaustive and largely self-regulated source of data on living people. The number of words and links in a profile generally corresponds to the subject’s prominence. The site’s community of editors tends to edit down or remove obvious attempts at self-promotion, giving us valuable way to measure influence across a vast spectrum of people.

For each person in the “Living People” category, TIME used the MediaWiki API to gather four data points: The number of words in the text, the number of internal links to other Wikipedia pages, the number of external links, and the number of categories to which the page belonged. Given that these factors are all positively correlated to the subject’s prominence, we were able to reduce these four dimensions into a single measure of prominence using a well-tested method known as principal component analysis.

Thanks to Wikipedia’s “Alumni by university or college in the United States” category, we were able to identify alma mater information for over 100,000 of the people in the database. From there, ranking the schools was a simple measure of adding up the natural log of the score for each alumnus.

There are inevitable discrepancies in how alma maters are recorded on Wikipedia. Law schools and business schools are usually listed separately from a university’s undergraduate program, for example, though some graduates of a professional program are also listed under the parent school.

Once again, deceased people are not included in this database. For living people, feel free to report missing alma mater data to chris.wilson@time.com, or edit Wikipedia yourself. If you do so, review the editing guidelines and then add a person to a school’s category for alumni, which is found at the end of a profile and looks like this:

TIME will rerun the alma mater counts once a day and check every new edition by hand to prevent any gaming of the rankings.

Texas Man Dies After Falling Into Grand Canyon
Next Up: Editor's Pick