Management is from Mars, Labor is from Venus

Robots at the Volkswagen Chattanooga plant weld a 2012 VW Passat in the body shop at the plant near Chattanooga, Tennessee, U.S., on Wednesday, June 1, 2011. The plant which has an initial capacity of 125,000 units per year, will build the 2012 Volkswagen Passat for the U.S., Mexico and Canada. Photographer: Mark Elias/Bloomberg
Mark Elias / Bloomberg via Getty Images
By Rana Foroohar

The most important labor debate in the country right now isn’t the minimum wage issue that President Obama spent so much time on in his SOTU speech this week. Rather, it is a fascinating fight that’s going on at a VW plant in Chattanooga, Tennessee, over whether or not there will be a German style “works council” at the factory, an old style branch of the U.A.W, or no organized labor movement at all.

It’s a deeply psychological fight that has created some surprising alliances and rifts, and may herald an entirely new way to think about labor relations and economic development in this country. As everyone knows, American unions and American management are like oil and water—in the U.S., shareholder capitalism has always had little regard for the ownership rights of workers, and (perhaps as a result) organized labor has always been militant and difficult. Management squeezes, and labor pushes. While unions in the U.S. have been modernizing and adapting to globalization and outsourcing in recent years, which has resulted in concessions that would have been unheard of even a decade or two ago, the idea that management and labor could work together to come up with the best way to run a company has been a completely foreign idea.

In fact, it’s a German idea. As Time has covered in numerous stories, Germany’s more inclusive system of “stakeholder capitalism,” in which management, owners, labor, and even civic leaders all have places on the board and a say in corporate strategy, has resulted in better growth and lower unemployment since the Great Recession and recovery. Basically, giving everyone a say makes it easier to create job-saving compromises. I think it’s an idea that should have legs here in the U.S.

The question is whether we can adapt to such a radical labor relations shift. The UAW has been trying to unionize the South, so far unsuccessfully. Surprisingly, VW executives in Tennessee are now open to the idea of having a voice for labor–but it seems that they want it to more closely resemble the German style system, rather than an old style American union system. (For a good round-up of the facts, see the New York Times coverage of the issue.)

The UAW understandably wants to make sure that a works council isn’t just a quick and dirty way around real labor representation. What the whole thing underscores is that in the U.S., management is from Mars, and labor is from Venus. It’s time for a new system. I’ll be doing some reporting on what’s happen in Tennessee in the coming weeks, and blog about what it might mean for growth, jobs, salaries, and the labor share of the pie. 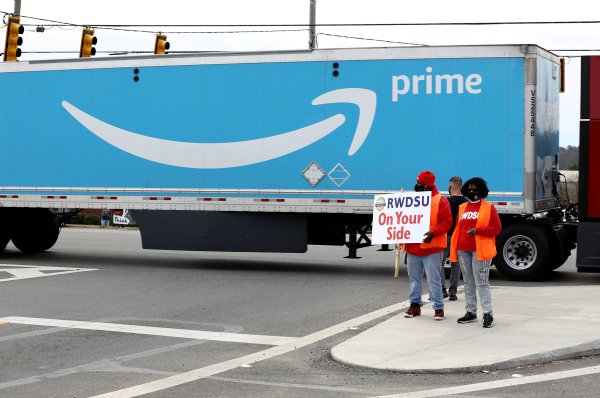 Why Amazon's Alabama Union Vote Could Spur Labor Movement
Next Up: Editor's Pick