Thousands Are Rallying on Facebook to Save This Child-Mauling Pitbull

Thousands of people have taken to Facebook to defend a vicious pitbull after he chewed on a four-year-old kid’s face last month.

More than 43,000 dog-lovers have liked the Save Mickey Facebook page in support of the beast who cracked little Kevin Vicente’s jaw, cheekbone and eye socket when he nearly ripped off the boy’s face in a nightmarish mauling in Phoenix. The savage canine is scheduled to be euthanized after its owners gave him up in the wake of the mauling. A judge could rule March 25 on whether Mickey will be euthanized, and the dog already has a team of pro-bono lawyers fighting for his life.

Attorney John Schill, who is defending Mickey in court, says the blame lies with the adults who were responsible for Kevin, not Mickey. “Having Mickey killed is not going to take away Kevin’s pain or injuries. The only thing this is going to do is kill a poor, innocent dog,” Schill said, according to the Associated Press.

Adults who were present say the dog attacked when Kevin took his bone. Kevin’s mother, a single mom, has had to quit her job to care for the boy, who may require months or years of reconstructive surgery. 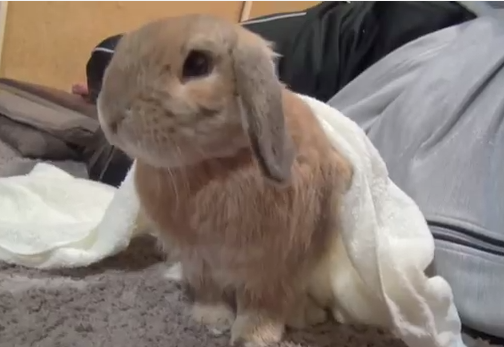 Watch a Bunny Throw a Tantrum Whenever He Isn't Getting Pet
Next Up: Editor's Pick