Motorola Was a Gargantuan Mistake Only Google Could Afford to Make

After agreeing to acquire Motorola Mobility three years ago for $12.5 billion, Larry Page, Google’s chief executive, gushed with optimism for the phone-maker’s future. No, he didn’t buy the company merely for its patents. Rather, he promised to reinvigorate Motorola by creating innovative phones to better compete against rivals Apple and Samsung. “I think this is a unique opportunity and one that I’m tremendously excited about,” Page said at the time.

But making headway in the crowded smartphone market proved to be far tougher than he anticipated. On Wednesday, Page all but admitted his mistake by agreeing to sell Motorola to Lenovo Group, the Chinese electronics colossus, for $2.9 billion. “There’s no way to see this whole adventure as anything but a failure,” said Jan Dawson, an analyst for Jackdaw Research. “It’s not just as a loss on the acquisition, but also the money Motorola lost for Google along the way.”

Most analysts believed Google simply wanted Motorola’s 17,000 technology patents. Owning them would help Google defend its Android operating system from infringement attacks. Google executives acknowledged patents played a role in the original Motorola deal. But they insisted that they also wanted to sell smartphones, which Google had been trying to do on its own with its Nexus line of smartphones, but with limited success.

How much money Google ended up losing on Motorola is debatable. What’s clear is that Google recouped much of the money by selling Motorola’s phone business on Wednesday and its television set-top box business last year.

In the end, the cost to Google should be around $4 billion. But Google will retain most of Motorola’s patents, which considerably softens the financial blow. The patents haven’t proved to be as iron clad as once believed, however. Google has lost or received unfavorable rulings in a number of patent cases.

In explaining the Motorola sale, Page said in a blog post that the smartphone market is “super competitive” and that “to thrive it helps to be all-in when it comes to making mobile devices.” By unloading Motorola, Google will now be able to focus its innovative energy on Android, the most popular operating system for mobile devices.

Although it is selling Motorola, Page explained that Google would continue to move ahead with other hardware including Nexus phones, Chromebook laptop computers and Glass, the company’s futuristic eyewear. Additionally, Google is expanding into Internet connected home appliances through a planned $3.2 billion acquisition of Nest, a start-up that sells smart thermostats and fire alarms.

“This does not signal a larger shift for our other hardware efforts,” Page wrote. “The dynamics and maturity of the wearable and home markets, for example, are very different from that of the mobile industry.”

Ross Rubin, an analyst with Reticle Research, said that Google executives initially thought they could supercharge Motorola’s business, much like they did with prior acquisitions like YouTube and Android. After an initial lull, Motorola introduced two phones designed under Google’s leadership. The Moto X, a mid-priced phone, and the Moto G, a lower cost device, generally received positive reviews. Google even splurged on television commercials and billboards to stir up interest among consumers.

But Motorola’s sales have been sluggish and have failed to stem the division’s big losses. In the quarter ending in September, revenue fell nearly one-third, despite the premiere of the flagship Moto X. The phones didn’t stand out against rivals and never managed to get enough distribution from telecom carriers. Finding a buyer for Motorola seemed like the logical thing to do, Rubin said.

Investing more money in the effort was risky and tangential to Google’s more important Android software business. “The handset business always seemed to be something that Google thought ‘this is something we’re interested in, but if it doesn’t work out, we’ll just sell it,’” Rubin said.

Google is, of course, not like other companies. Making big bets of risky projects is part of its culture. Usually, the failures are relatively small and disappear quietly, never to be seen again. This time, the misstep was big and unavoidably public. “Motorola fits in the mold of acquisitions that Google made with the attitude, ‘Why don’t we try this just because we can,’” Dawson, the analyst with Jackdaw said. “Google makes decisions that other companies wouldn’t.”

Ultimately, selling hardware is a business of scale with enough room for only two or so major companies in each category, he said. Samsung and Apple already dominate higher-end smartphones.

Early on, Google executives argued that owning Motorola would help in accelerating innovation with Android. Following Apple’s lead in owning both the hardware and software sounded great. But the realities of the market made it nearly impossible. Google couldn’t play favorites with Motorola for fear of alienating other handset manufacturers that also use Android.

Still, the potential conflict led to tension with manufacturers, particularly with, Samsung, Google’s biggest Android partner. On Sunday, both companies called a truce by agreeing to share their existing patents along with those issued in the next 10 years. Few details were made public. But the deal seemed to set the stage for Wednesday’s announcement that Motorola would have a new owner.

As usual, Google appeared to have emerged from it all in pretty good shape. Lenovo will continue to churn out phones that use Android, creating a new rival to Samsung’s dominance. Meanwhile, Google will no longer saddled with losses from making phones in-house. 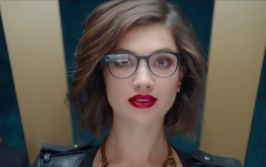 Google Glass Will Now Come with Prescription Frames
Next Up: Editor's Pick