Senate Republicans took to the floor Wednesday afternoon to express unhappiness at how the GOP minority is being treated in the chamber.

“We can be more constructive; we can work through our differences,” Senate Minority Leader Mitch McConnell told virtually all of his fellow Republicans, who’d gathered to hear him speak. “We can do things that need to be done, but there will have to be major changes if we’re going to get there. The committee process must be restored. We need to have an open amendment process. And finally, let me suggest we need to learn how to put in a decent week’s work around here. … [And] how about the power of the clock to force consensus? That’s the way everyone’s patience is worn down. Not just the majority leader’s patience.”

McConnell suggested that if Republicans win back the majority this November that he would, as majority leader, restore minority rights and regular order.

The speech comes two months after Senate Democrats changed filibuster rules to streamline the confirmation process for many presidential nominees, in the face of an unprecedented number of filibusters in recent years. Republicans argue that the rules change is just one example of the erosion of minority rights in what’s been called the world’s greatest deliberative body.

“Look, I get it. If Republicans had just won the White House, the House, and had a 60-vote majority in the Senate, we’d be tempted to empty our inbox too,” McConnell said. “But you can’t spend two years doing it, then complain about the backlash. If you want fewer fights, give the other side a say.”

Democrats preemptively responded to McConnell’s speech by noting that under Senate Majority Leader Harry Reid’s tenure, 68% of amendment votes have been minority amendments versus 66% under former Senate Majority Leader Bill Frist and 54% under his processor Trent Lott, both of whom were Republicans. At the same time, Reid’s office noted, McConnell’s use of the filibuster ballooned from 68 times under Frist to 139 times in McConnell’s first Congress as minority leader. President Barack Obama’s judicial nominees have waited, on average, 100 days longer than those of President George W. Bush and 20 of the 23 filibusters of district court nominees have been of Obama’s picks.

Reid, responding on the Senate floor, said McConnell was simply trying to distract from GOP intransigence over extending unemployment benefits. “It’s cold hearted,” Reid said. That bill cleared a procedural hurdle in the Senate on Tuesday but faces an uncertain future over Republican objects to funding offsets in both the House and Senate.

With only 65 bills passed in 2013, this Congress is on track to have the least productive legislative season in more than 40 years. 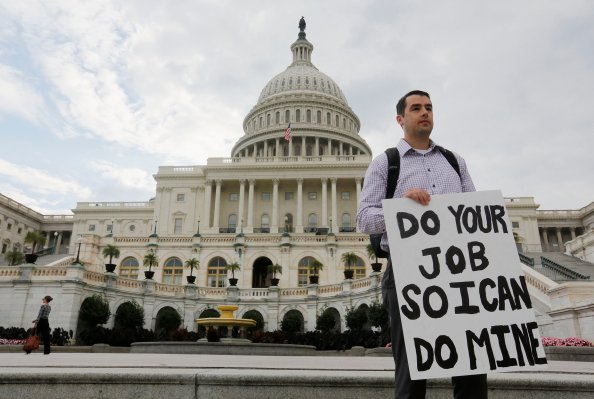 Congress Is Now Mostly A Millionaires’ Club
Next Up: Editor's Pick