Crimea’s police force said it was a training operation. The office of its separatist leader said it was a hunt for a cache of weapons. The local defense ministry said it was part of an “information war” with the Ukrainian government. But whatever it was, it resulted in roughly two dozen commandos taking over a major hotel on Saturday night in the Crimean capital of Simferopol.

Coming one day before the breakaway leaders of Crimea stage a referendum on their secession from Ukraine, the siege of the Hotel Moskva showed just how volatile and close to conflict the region remains. When the gunmen arrived, pulling up to the hotel in unmarked vans with tinted windows and no license plates, the hotel was packed with journalists, including this correspondent, who have arrived from around the world to cover Sunday’s historic referendum.

None of the troops wore any identifying insignia, much like the Russian forces who have occupied Crimea in the lead-up to Sunday’s vote, which will open the door for Russia to annex the entire peninsula. Some of the gunmen were wearing civilian clothes, with an apparent penchant for black beanies and leather jackets. Others were in full military camouflage, helmets and face masks of the kind worn by Russian special forces. All of them were armed to the hilt, mostly with silencer-equipped Kalashnikov assault rifles and usually with sidearms strapped to their legs or bullet proof vests. At least one of them had a grenade-launcher affixed to the barrel of his rifle.

On the 6th floor, three of the gunmen were standing guard around the elevator bank, patting down anyone who came out of their rooms and ordering them to wait quietly and not take any photographs or make any phone calls. “We’re looking for an armed criminal,” one of the masked commandos told TIME. “This is a special operation,” he added, using the term that Russians typically use for counter-terror raids. One of his comrades then tried to shush him, to which the man responded, “What? Just tell it like it is.”

But that was just one of the contradictory explanations for the raid on offer that night. In the lobby, a spokeswoman for the Crimean Interior Ministry arrived while the gunmen were sweeping the hotel. “This is a training operation. We carry these out from time to time so that our forces can be in tip-top shape, able to respond to any threats that may emerge,” said the spokeswoman, Olga Kondrasheva. The raid had nothing to do with the referendum, she insisted. Asked about the last time such a training operation had been carried out in Crimea, she said it was, “oh, maybe a month ago.” But she could not say how many times such operations had been held out in the course of her 21 years as a spokesman for the ministry. “That’s not public information,” she said.

A totally different version of events came from the elderly General Valery Kuznetsov, the separatist Minister of Defense in Crimea, who arrived at the hotel in a beige windbreaker and apologized to reporters for the disturbance. “Kiev is waging an information war against the Crimean Republic,” he told TIME. “It is throwing out all kinds of disinformation. You understand? They throw it, and our guys have to check it.” Although he declined to say where the information had come from, he insisted that a “clear threat” had been reported inside the hotel, and his troops were dispatched to investigate. He declined to say why those troops were traveling in unmarked vans or why they were not wearing any insignia. “I’ve told you enough already,” he said before storming out of the hotel right after the gunmen had left.

Some clarity on these last points, but not much, came from Sergei Kavtan, an adviser to the newly anointed Prime Minister of Crimea, who seized power in the region after an armed takeover of the parliament and the government headquarters on Feb. 27. “They were looking for a cache of weapons,” says Kavtan, who has been serving as a media adviser to the separatist leader Sergei Aksyonov. The difference in the uniforms of the gunmen was because one team was from the Interior Ministry police force, Kavtan said, while the other team was from the Crimean military. “They didn’t find anything. So they left.”

It is not clear, however, how the Crimean military could have found time to prepare and equip any kind of rapid reaction force. Up until last week, Crimea did not have an army, and the only military forces moving freely about the region were the Russian special forces troops who have occupied the peninsula. The Ukrainian military, which has several bases in Crimea, has been barricaded inside their garrisons by the occupying force of Russians. So it was only last Saturday that Aksyonov, the region’s Moscow-backed leader, initiated his first batch of military troops, many of whom were elderly and clearly unaccustomed to their weapons as they pledged their oath of allegiance to Crimea last week.

Those men did not fit the description of the gunmen who seized the hotel. They appeared to be trained professionals, although they could not avoid a few acts of aggression toward civilians. Several of the reporters who tried to photograph them had their memory cards destroyed by the masked troops, while one of the gunmen tried to take a swing at a cameraman as he left the hotel. “I’ve already smashed one camera,” shouted the masked man with an assault rifle slung over his shoulder. “You want me to smash the rest?” The reporters backed away, clearly recognizing that these men, whoever they were, had the authority to do pretty much as they pleased one night before the referendum that will decide Crimea’s future. By the look of things, that future will include at least one foreseeable characteristic: the presence of armed men whose exact purpose, origins and nationality may be hard to pin down. 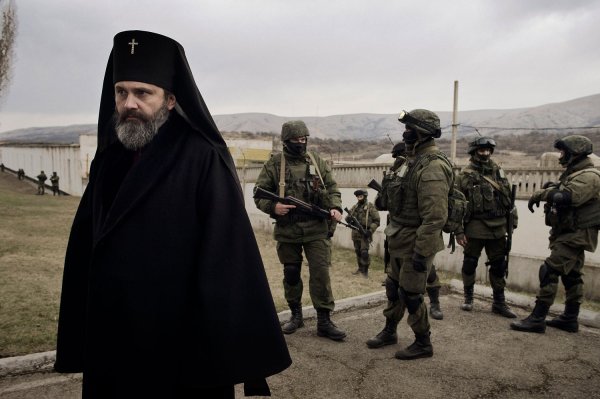