Farewell to a Cosmic Mr. Fix-It

I spoke to Ed Smylie only once—about 20 years ago, when I was writing the book Apollo 13—and I counted it as one of life’s great privileges. Smylie was the improvisational genius who devised the on-the-fly fix that allowed the astronauts in the crippled spacecraft to use the air scrubber designed for their command module in their lifeboat lunar module instead. In one of the signature scenes from the later Apollo 13 movie, he dumps out a load of duct tape, plastic bags and other items the crew had on board, then holds up the command module’s square canister and the lunar module’s round one.

“We’ve got to make this fit into the hole made for this,” he says, then gestures toward the junk on the table, “using nothing but this.” And they did.

I was put in mind of Smylie today when I read that one of NASA’s other great Mr. Fix-Its, Jack Kinzler, had died at the age of 94. Kinzler was the man who invented, among other things, the collapsible staffs that were used on the moon to make the flags the astronauts planted in the airless environment appear to be flapping. But it was in 1973, when the Skylab space station went into orbit and disastrously shed its external shielding on the way up, that Kinzler really saved NASA’s hash. Without the shielding, the temperature inside the station rose to a broiling 130°F (55°C ), utterly uninhabitable for the three-man crew waiting to blast off and join the orbiting ship.

So Kinzler invented a huge, parasol-like heat shield that the astronauts—protected by their spacesuits from the heat inside Skylab—could carry into the sweatbox station when they arrived, poke through a porthole-like airlock and then unfurl. The crew brought the ungainly thing to orbit with them, deployed it as Kinzler instructed, and then went about their 28-day mission in a shirt-sleeve environment—marking America’s first long-term stay in space.

Space travel has always been exceedingly intolerant of surprises. It’s an enterprise in which hardware is designed down to multiple decimal points of reliability, in which almost no system is flown without one or more back-up systems, in which the “single-point failure”—the one-off breakdown that by itself could wreck a mission—is scrubbed out of the equation almost completely. It’s thus something of an engineering irony that what we remember the most, what we celebrate the most, are the imaginative, in-the-moment fixes that no mission planner would ever abide until they run out of options.

And so we had the unmanned Galileo mission to Jupiter, which was launched in 1989 and almost immediately came to ruin when one rib on its umbrella-like high-gain antenna failed to open, essentially rendering the spacecraft mute. Engineers thus reprogrammed the ship from the ground so that the torrent of pictures and data it would collect at Jupiter could be stored on magnetic tape—reel-to-reel, thank you very much—and then trickled back to Earth via the functioning low-gain antenna. This was worse than going from broadband down dial-up; it was more like broadband to Morse code. And yet it worked.

And so we had William Pickering, the great mid-century rocketeer, watching in dismay as the Vanguard booster—which he hadn’t built and didn’t much care for—failed in its attempt to put America’s first satellite in orbit in 1957, blowing up just six inches above the pad. “Kaputnik!” hooted the headlines, in a jab at the fact that the Russian’s celebrated Sputnik had launched just months earlier. So Pickering recruited Wernher von Braun and James Van Allen, stacked his own second-stage rocket atop Von Braun’s first stage, and crowned them both with Van Allen’s Explorer 1 third stage satellite. Less than two months later, America was in space.

When things are going well, that’s no way to do business. But things fall apart, stuff breaks down, even the most meticulously planned projects can become—as the engineers like to say—suboptimal. So props to the people who step in then. It ain’t just the duct tape—though that’s part of it—and it ain’t just the imagination. It’s the speed and the cool and the presence of mind that allows people under pressure to invent on order, and make the stuff work. Suboptimal is bad, but the people it produces can be legends. Kinzler was one of them. 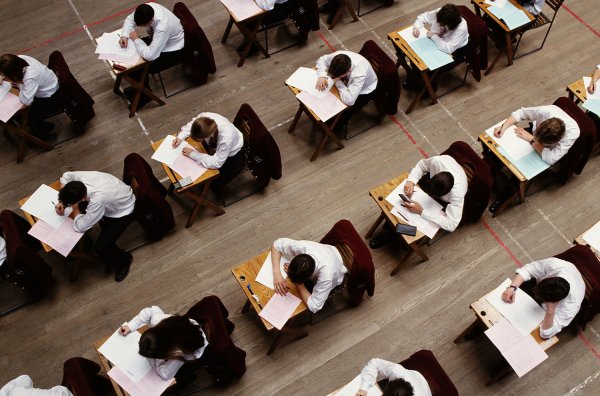 Area Teen Says She 'Will Die' If She Has to Wake Up Any Earlier for School
Next Up: Editor's Pick