A Turbulent Priest Awaits The Conquest of Crimea

Archbishop Kliment began evacuating the holy icons from his church about two weeks ago, as soon as he realized that the region of Crimea, where he serves as the head of the Ukrainian Orthodox faith, would soon fall to the Russians. He wasn’t so much afraid of looting or arson from the Russian soldiers occupying his region of Ukraine, although that concerned him too. He was preparing for nothing less than the nullification of the Ukrainian Orthodox church. Under Russian rule, “we will simply be liquidated,” he says. “Our church is an enemy to the order that Russia would impose here, and our churches would be either looted or in the best case forced to close.”

Those are not empty fears. Next week, Russia will get its chance to annex the entire Crimean peninsula, whose referendum on Sunday is stacked in favor of full secession from Ukraine. The result isn’t likely to do terrible and lasting damage to Ukraine’s economy or demographics. Crimea is a depressed region, connected to the mainland by only two roads, and the majority of its two million people are ethnic Russians who will likely welcome the chance to rejoin their historical homeland. But for Ukraine’s people, their security and their sense of national pride, the loss of Crimea will be devastating. A generation since Ukraine won its independence from Moscow after the fall of the Soviet Union, it will again have to confront its own subversion, as well as the theft of its territorial jewel, the home of hundreds of thousands of ethnic Ukrainians and the birthplace of their religion.

The country remains, in many ways, a hostage of its own geography and history. Ukraine shares a wide-open border with Russia all along its east and south, and in the past week, around 80,000 Russian troops have surrounded it, according to Ukraine’s security council. If the government in Kiev uses force to defend Crimea from annexation, Russia is almost certain to launch a broader invasion. On Friday, the Russian Foreign Ministry even warned in a statement that it “reserves the right” to take parts of eastern Ukraine “under its protection.” The stick-up job implied in this threat is simple: give up Crimea and Russia may hold off on taking anything else.

“That is what we fear most,” says Archbishop Kliment, sitting in his stripped-down church in the Crimean capital of Simferopol. “If they trade us for peace in the rest of Ukraine, that would be impossible to forgive. You cannot abandon your land and your people. You just can’t.” But Kiev doesn’t have much choice.

Since Ukraine’s revolution brought a new government to power three weeks ago, its diplomatic relations with Russia have broken down. Moscow has condemned the new leaders in Kiev as extremists and radicals, while American and European efforts to broker a peace deal have gotten nowhere. No one seems willing or able to stop Russia from exacting a heavy price for Ukraine’s sudden turn toward the West, and few will have to pay a larger share of that price than Archbishop Kliment.

His church, at least in the eyes of Crimea’s pro-Russian rulers, is a palpable threat, a unifying voice against Russia’s dominance of this part of the Slavic world. To make matters worse, Kliment played an active role in Ukraine’s pro-Western uprising this winter. In January, he was among the priests who formed a human shield between the protesters in Kiev and the riot police, watching rubber bullets and stun grenades buzzing around their heads as the troops surged forward. In February, Kliment saw those same police forces gun down dozens of protesters in Kiev’s Maidan square, the epicenter of the revolution, and then presided over many of their funerals.

But his greatest crime against Russia’s interests in Ukraine came on the day of that massacre, Feb. 20, when he stood on the stage in the center of the Maidan and read out the declaration of the Ukrainian Orthodox Church. Its clergy, led by Patriarch Filaret, had decided to renounce the ruling government in Ukraine, and the following day, that government fell to the revolution. For him, as messenger, that was the highpoint of a gruesome winter of rebellion. His memory of the funerals and the piles of bodies have been blurred by what he calls the moral panic of those days. But he remembers the declaration crisply. More than a 10,000 demonstrators roared in approval and then joined him in silent prayer on the Maidan. “It was an indescribable joy,” he recalls of that moment. “For all of us it was like a breath of air after a time of such suffocating darkness.”

For sympathizers of the revolution, that pronouncement turned Kliment and his fellow clergymen into national heroes, but it also brought them into open conflict with Moscow. Their religious schism, the split between the Kiev and the Moscow branches of Orthodoxy, was nothing new. It began almost 20 years ago, soon after the collapse of the Soviet Union, when the head of the faith in Ukraine, Patriarch Filaret, demanded more autonomy from his superiors in Moscow to develop an independent branch of the church in Ukraine. The clerical council in Russia, known as the Holy Synod, not only refused that request but deemed it heretical, and the Moscow Patriarchate has been building a rival network of churches across Ukraine ever since.

Because of its history, a crucial battleground in this feud has always been Crimea. The peninsula’s ties to the early Christian church go all the way back to the First Century, when Pope Clement I, a contemporary of the Apostles, is thought to have been exiled by the Romans to the stone quarries of Crimea as punishment for his devotion to Christ. His skull, which is stored in the Monastery of the Caves in the center of Kiev, has always been one of the holiest relics of the Orthodox Church. Beyond that, Crimea is where the first Russian ruler was baptized. In the year 988, Vladimir the Great, the patron saint of Russian President Vladimir Putin, accepted Christianity in what is now the city of Sevastopol, home of Russia’s Black Sea navel fleet.

On its own, none of that history explains why Putin sees this land as part of his rightful dominion. He seems much more concerned with the strategic and political benefits of his incursion into Crimea. But the fact that this peninsula is the cradle of Russian Christianity goes a long way toward explaining why Putin guards his claim to it so jealously.

Throughout his 14 years in power, Putin has placed the Russian Orthodox Church at the core of his vision of a national revival, and the Church has in turn invested heavily into the construction of churches in Crimea. Dozens of them now dot the peninsula, with the golden domes of the newest one being built just beside the headquarters of the breakaway government in Simferopol. Its rivals from the Ukrainian Orthodox clergy have only been allowed to build 15 churches in Crimea, none of them in conformation with the architectural traditions of their faith.

The chambers of Archbishop Kliment (who took his clerical name from Pope Clement I) are inside a former military academy in Simferopol, just down the block from the central bazaar. And he does not even own that property; it is leased to him by the Crimean government, which is now under the control of pro-Russian separatists. So next week, if Russia moves ahead with annexation, his denomination of the faith may find itself pushed out of Crimea entirely. For that he blames the government in Kiev as much as he blames Russia. “I won’t go back to Kiev if it betrays us,” he says. “Returning to a country that abandons a part of its people doesn’t make sense to me. I would rather become a refugee somewhere else, or a slave here to the Russians.”

Such fears have troubled all of Crimea’s ethnic minorities, and in the past two weeks, the Kremlin has tried hard to calm the local Tatars, a Muslim ethnic group that makes up about 12% of its population. President Putin even spoke on the phone with one of the leaders of the Tatar community on Wednesday, promising that they would be protected under Russian rule. But Moscow has made no such gestures toward the ethnic Ukrainian minority in Crimea, and certainly not to the Ukrainian Orthodox Church, whose adherents make up about 10% of the population.

That amounts to as many as 200,000 believers, who are considered members of a heretical sect in the eyes of the Russian Orthodox Church. Last week, TIME asked a representative of the Moscow Patriarchate in Crimea to respond to the fears of their Ukrainian rivals. The response was to deny that they even exist. “There is no schism,” says Vitaly Liskevich, a priest of the Russian Orthodox Church in Crimea. “The people you’re talking about are self-proclaimed priests. In reality there is only one Orthodox Church, and that is the only one that will exist.”

Archbishop Kliment has grown resigned to that fact. The iconostasis in his church, the wall of icons that separates the altar from the congregation, has already been dismantled and its paintings hidden in the homes of his friends. The evacuation, as he calls it, has given him a level of protection from a Russian seizure of the church, but it has not helped him calm his congregants. At his most recent Sunday Mass, the worshipers listened calmly to his sermon, but when they came up to him afterward for solace, “hysteria broke out,” he says. “First one began to weep, and then the second and the third, like a chain reaction, and I had little to offer in the way of counsel. Ukraine has abandoned us, and we are left with no protection except, as ever, from the will of God.” 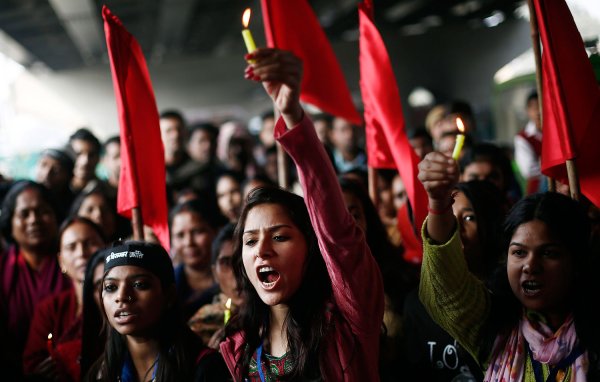