Malaysian Prime Minister Najib Razak announced Saturday that Malaysia Airlines Flight 370, which disappeared a week ago with 239 people aboard, appeared to have been intentionally steered off course by at least one person with considerable flying experience.

The plane’s disappearance was the result of a “deliberate action by someone on the plane,” Najib said during a press conference. Authorities are very confident that the jet’s transponder was disabled during the flight, he added, and that the last satellite communication from the aircraft came about seven hours after takeoff. That means that the plane could have flown on for thousands of miles.

Satellite data confirms that the plane turned to fly in a westerly direction soon after reaching the South China Sea. Two “corridors” have been identified where the plane may have flown: a northern sector around the borders of Kazakhstan, Turkmenistan and northern Thailand; and a southern sector stretching from Indonesia to the southern Indian Ocean. Search efforts will now be concentrated in these vast expanses.

The news resurrects the possibility that the aircraft might have landed safely. Captain Ross Aimer, an aviation consultant who was formerly an instructor for the 777, tells TIME that a pilot with “considerable skill and experience” could land the aircraft in as little as 3,000 ft. (900 m) of space. “It’s conceivable that if this was a calculated setup they may have an old military field somewhere in the middle of some jungle,” he says. “You could even land it on a beach or small strip of land.”

But other theories that gained steam in the past few days, including pilot suicide, an in-flight bomb or midair disintegration, have not been ruled out. “Despite media reports that the plane was hijacked,” Najib said, “I wish to be very clear: we are still investigating all possibilities as to what caused MH370 to deviate from its original flight path.” No motive for any hijacking has been established and no demands are known, but the investigation has been “refocused” into the passengers and crew members.

Other possible theories might include a loss of cabin pressure rendering passengers and crew unconscious, and a malfunctioning autopilot causing the plane to veer off course. However, the seemingly deliberate route and numerous direction changes would make that unlikely.

The aircraft had 227 passengers and 12 crew on board when it departed Kuala Lumpur International Airport for Beijing at 12:21 a.m. local time on March 8. The Aircraft Communications Addressing and Reporting System, or ACARS, was disabled just before the aircraft reached the east coast of peninsular Malaysia, and shortly afterward, near the border between Malaysian and Vietnamese air-traffic controls, the aircraft’s transponder was switched off. Investigators conclude that any gap would be unlikely in the event of an explosion.

Despite a massive search, no wreckage has yet been found in the immediate vicinity of where communication was lost between Malaysia and Vietnam. Najib said in the press conference that Malaysia had ended its search in the South China Sea. A search team boasting 43 ships and 58 aircraft from 14 nations has been enlisted.

Earlier, an American official said investigators were examining the possibility of “human intervention” in the jet’s disappearance, adding it could have resulted from “an act of piracy.”

Distraught relatives of passengers have seen their frustration with a lack of progress turn to anger with the Malaysian authorities. Numerous contradictions and inconsistencies have emerged over the course of the past week, prompting widespread criticism. Najib, though, insisted that his government had put “national security second to the search for the missing plane.”

However, analysts are also now asking why the unidentified plane was not intercepted or tracked, given that it was spotted on military radar. Najib did not accept any questions during the press briefing.

“I realize this is an excruciating time for the families of those on board,” said Najib. “No words can describe the pain they must be going through.” Yet with two enormous corridors stretching thousands of miles left to explore, providing any closure remains a daunting task. 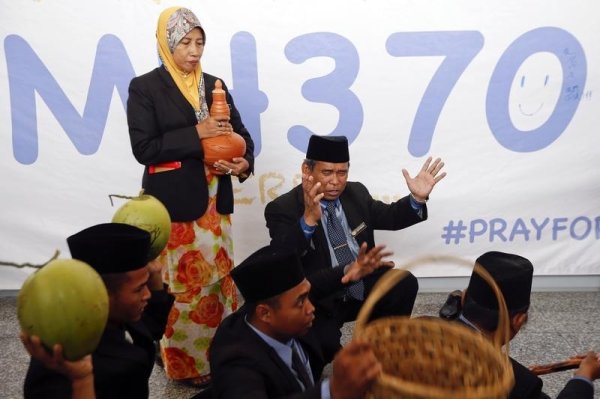