The Mobile App War Is Really an Ecosystem War

Daring Fireball’s John Gruber has blogged about my piece from yesterday, in which I said that the fact that United Airlines’ new in-flight streaming service is launching first on iOS is more evidence that Apple won the app wars. Gruber rightly points out that it’s really an ecosystem war, and mentions some of the iOS advantages which I mentioned in my earlier item on this topic. Those include the ease of supporting a platform which ships on a handful of devices from one company (Apple) and the fact that iOS users, on average, seem to interact with their devices more and be more willing to spend money.

Those points aren’t new, but I don’t think it’s possible to overstate how helpful it is to Apple’s cause that developers only have to worry about making their wares work on a few different gadgets, with little variance in specs, features and operating-system versions. If the company does release one or more iPhones with different screen sizes later this year, it’s going to have to figure out a way to avoid giving up that edge on Android.

I’ve been confused as to why today’s mobile market seems to confuse so many pundits. Gruber’s metaphor is a great way of thinking about the game that’s going on, and why the very act of expecting it to be like the PC market makes even smart folks leap to the wrong conclusions. 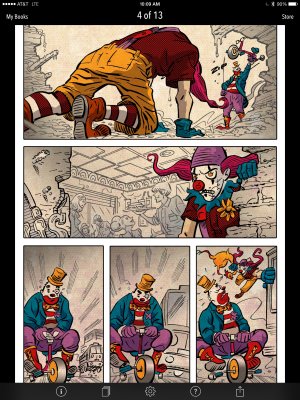