Gays Unlikely to March in St. Patrick's Day Parades Despite Push From Mayors

The joke, Brendan Fay recalls, was that peace would come to Northern Ireland before gay people like him would be allowed to take part in New York City’s St. Patrick’s Day parade. Peace came on Good Friday 1998, but Fay is still trying to march down Fifth Avenue.

It’s been a long fight. But he now has some powerful allies. New York City Mayor Bill de Blasio and Boston Mayor Marty Walsh, both newly elected, ambitious, self-styled progressives, have said they will boycott their respective city’s St. Patrick’s Day parades if LGBT groups continue to be excluded.

Walsh has tried to broker a deal between gay-rights advocates and parade organizers, so far without success. De Blasio marched instead in St. Pat’s for All, a counter-parade organized by Fay that welcomes gay groups.

Their efforts have largely been symbolic, though on Friday, Boston Beer Co., the maker of Sam Adams, withdrew as a sponsor of Boston’s parade because of the exclusion. But the cities have two of the largest and most influential Irish Catholic populations in the nation, and the firm stances of their new mayors could finally bring long-simmering tensions to a head.

“I’m as Irish as anybody,” Walsh says. “There’s no reason for this, most certainly in 2014. We’re way beyond this as a country, and I wish we could get way beyond it as a parade. Boston and New York, come on!”

Getting beyond it has not been easy. The St. Patrick’s Day celebrations in New York and Boston are permitted by each city but run by private organizations, a distinction that allows parade organizers to bar gay groups from marching. A 1993 federal-court decision upheld the right of New York’s parade organizers to exclude groups marching under gay-rights banners. Two years later, a 9-0 Supreme Court decision held that gay groups couldn’t force their way into the Boston parade.

The two parades have clung to those decisions ever since, even as other parades opened their doors to gay groups. In Dublin, Galway, Cork and other Irish cities, gay and lesbian groups march in St. Patrick’s Day events without incident. Chicago, which has a large Irish Catholic population, has allowed gay groups since the mid-1990s. “Our city realized a long time ago that we have so much more in common than apart,” says Tom Tunney, Chicago’s first openly gay alderman. “We’re a city of cultures, and the LGBT community is a part of it.”

The resistance to inclusion is a stark contrast to the nation’s growing acceptance of gay rights. In recent months, federal judges have struck down state bans on same-sex marriage in Utah, Virginia, Kentucky, Oklahoma and Texas, and challenges are pending in many others.

“Our lives are being discussed and dissected in courts around the country,” Fay says. “Whether you’re a firefighter or a bagpiper or a same-sex family with children, Irish heritage and culture belongs to all of us.”

The marriage-equality movement began in Massachusetts, when the state’s high court ruled in 2003 that bans on same-sex marriage were unconstitutional. But the St. Patrick’s Day parade in its capital city has been far less welcoming. Every year, gay groups would apply to march through South Boston on St. Patrick’s Day, and every year, with little fanfare, they received denials. The city’s former mayor, Thomas Menino, refused to march in the parade as long as gay groups were excluded — but that didn’t keep him from politicking on the sidelines of the route.

Walsh is a union-backed former state legislator who hails from a working-class neighborhood very much like South Boston, which hosts the city’s parade. He has been an unlikely hero to the city’s gay community since he defied the Catholic Church and voted down a constitutional amendment that would have overturned the court ruling legalizing gay marriage in the state. His efforts to open up the city’s parade — which have been aided by Stephen Lynch, the conservative Democrat who represents South Boston in Congress — have put him at odds with two natural constituencies.

South Boston was at the center of Boston’s 1970s’ busing crisis. Two decades of rampant gentrification have remade much of the neighborhood, but many of the holdouts retain a frayed relationship with the outside world.

“There are some dissidents and it happens that a few of them run the parade,” says Susan Ulrich, a South Boston native who is active in the city’s LGBT community. “The people who run the parade are fighters, for better or worse. I grew up in a kind and gracious place. But if you back them into a corner, they will fight. If you look at the way the Irish were treated in this country, and the way the LGBT community treated, they’re remarkably similar. Both communities had to fight very hard. But communities that have to fight for every single thing they have, it dies hard.” 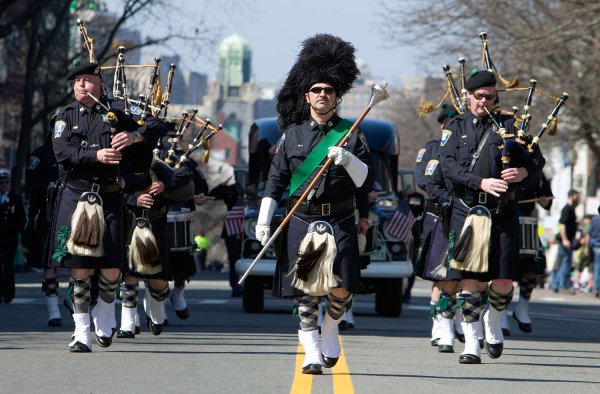