Former Massachusetts Republican Sen. Scott Brown will announce late Friday that he’s formally exploring a campaign to return to the Senate, but this time representing New Hampshire, a person familiar with his decision confirmed to TIME.

New Hampshire Republicans were abuzz Friday with the expectation that Brown would take the first step toward a 2014 Senate bid against incumbent Democrat Jeanne Shaheen by forming an exploratory committee. He’s expected to make the announcement late Friday afternoon during the Northeast Republican Leadership Conference in Nashua.

“The last three days, all signs have been pointing towards him getting into the race,” said Fergus Cullen, a former state GOP chairman, noting that Brown has made campaign donations to county and city Republican committees in the state to the tune of almost $30,000. “That ought to accomplish the goal of buying some friends and probably muting any dissident voices.”

If Brown ultimately decides to run, his name recognition—New Hampshire is part of the Boston media market—will make him a tough challenger to Shaheen, brightening Republicans’ prospects of picking up the seat. It could make it easer for Republican to retake the Senate in the midterm elections, and will at least divert Democrats’ focus from tough races in Arkansas, North Carolina, Louisiana and others, and sap the nearly $3.5 million Shaheen has in campaign cash. Brown, who moved to New Hampshire, would have to face criticisms that he’s a carpetbagger. And first elected to the Senate as something of a moderate, he could also still face a GOP primary challenger.

Brown won a major upset victory in a 2010 special election for the late Sen. Edward Kennedy’s seat, but lost in 2012 by seven points to liberal firebrand Elizabeth Warren in the most expensive Senate race in American history.

After moving to the state for what he said were family reasons, Brown has popped up in local media sporadically. A month ago, a shirtless Brown graced the front page of the state’s largest daily newspaper as he participated in the Penguin Plunge, the proceeds of which go to the Special Olympics. He will have some outside help to aid what has been so far a mostly quiet, inside game: The Republican super PAC American Crossroads will launch a $600,000 ad buy next week against Shaheen, Politico reports.

Cullen said Brown could do well with Republicans even though he just moved to the state in December (he had a vacation home in New Hampshire before then). “The people who use it weren’t going to vote for him anyway, whether that’s in the primary or the general [election],” Cullen said. He advised Brown to emulate the strategy Hillary Clinton used when she moved to New York and ran for Senate there in 2000, a campaign that started with a high-profile listening tour across the state.

“My advice would be don’t pretend something that you’re not,” Cullen said.

In a speech that threw out red meat to conservative activists—praising the late Ronald Reagan and ripping ObamaCare, the IRS, and the 2009 stimulus package—and a call for both parties to come together for the betterment of the country, Brown announced Friday that he has formed an exploratory committee to prepare a campaign for the U.S. Senate. “A big political wave is about to break in America, and the Obamacare Democrats are on the wrong side of it,” said Brown, while noting that “There has to be a time and place where we act as Americans first, putting our country first.” 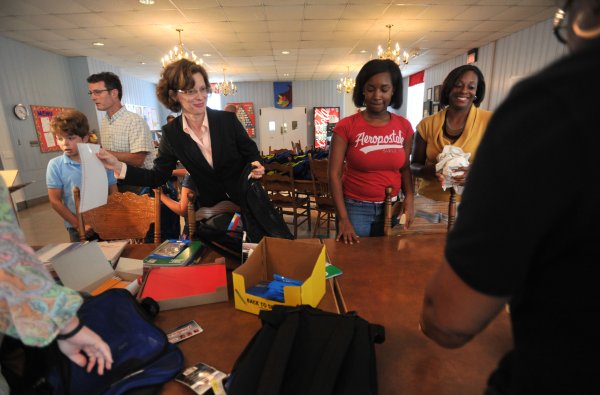