REVIEW: Need for Speed: It Kills and Thrills. Deal With It.

In the canyon-wide disconnect between what moviegoers see on screen and what they find in real life, consider the race-car film genre in the wake — the literal wake — of Paul Walker. Co-star of the immensely popular Fast & Furious franchise, which glamorizes stunt driving, Walker died last Nov. 30 when the red Porsche Carrera GT two-seater his pal Roger Rodas was driving crashed into a light pole in Santa Clarita, Cal. Police said the car may have been going 100 mph; both the Porsche and its passengers were incinerated. Walker’s death interrupted filming of Fast & Furious 7, which was due out this summer, though shooting is to resume next month.

Can’t wait till 2015 for a movie about car races, chases and crashes? Here’s Need for Speed, based on the world’s top-selling racing video game. In the first act, three guys — brooding speedster Tobey Marshall (Aaron Paul), his cute greasemonkey Pete (Harrison Gilbertson) and the rich bad guy Dino Brewster (Dominic Cooper) — race identical cars down the highways of Mount Kisco, N.Y. When Dino realizes he’s about to lose the race, he back-ends Pete’s car, which takes flight, hits a light pole on a bridge, bursts into flames and crashes in the river below. Dino’s killer car, like Paul Walker’s, is red.

And the weird thing is that, while watching this scene, even a viewer who had the details of Walker’s death seared into his brain doesn’t think about them. His eyes are transfixed by the choreography and spectacle of the stunt, the horrific majesty of the red car’s launch and torque, its fiery collision with the pole and its fatal descent, like winged Icarus, into the water. Such is the (possibly toxic) power of a superbly crafted action sequence over the moviegoer. Kinetic immediacy obliterates factual memory, and art — which in today’s films so often, too often, means gorgeous VFX or daredevil stunt work — transcends life and death.

Later in Need for Speed, Tobey, driving his retooled Ford Mustang cross-country with Brit bird Julia Maddon (Imogen Poots), is pursued by Dino’s rifle-toting goons through the Utah Canyonlands and toward the Moab Fault. Fortunately, his buddy Benny (Scott Mescudi, aka rapper Kid Cudi), who spends most of the movie hijacking one plane or another, has accessed a U.S. Army Apache helicopter. Flying above the car, Benny drops a long seat belt, which Tobey buckles just as the Mustang sails off a cliff, and the chopper totes him and Julia to safety. They’re like Thelma and Louise, only with a happy ending.

Happy middle, actually, since Tobey is headed to San Francisco for the big, super-secret De Leon race masterminded by a manic entrepreneur named Monarch (Michael Keaton), who oversees and narrates the action like Wolfman Jack in American Graffiti. Winding through the forests and coastal highways of Mendocino, this is a winner-take-all challenge for six contestants — including, of course, Dino — and, eventually, dozens of police cars and copters. Dino’s thugs have totaled Tobey’s Mustang, so he’s at the wheel of what car? The red one Dino was driving when he sent Pete on his trip to that automobile graveyard in the sky.

Like an abandoned vehicle with a complex motor that legendary Mustang retooler Carroll Shelby would be proud of, Need for Speed won’t win prizes for dramaturgy. The script, by George Gatins from a story he contrived with his brother John (who wrote the Denzel Washington drama Flight), is generic revenge motif: the poor boy hates the rich kid not only for his myriad evil qualities but because he stole Tobey’s girl Anita (Dakota Johnson, quite a bit of whom will be seen as the female lead in next year’s Fifty Shades of Grey film). Tobey’s pit crew mirrors the tokenistic ethnic diversity of Fast & Furious — the black guy (Mescudi), the Hispanic guy (Ramon Rodriguez), the Arab guy (Rami Malek) and the cute blond dead Pete (Australia’s Harrison Gilbertson) — each with one quirk, none with distinctive appeal.

(SEE: The Need for Speed trailer)

Paul, known to Breaking Bad fans as the whiny, needy, half-bright Jesse Pinkman, originally auditioned for the Dino role. Short and unprepossessing, he’s not hero material, though by glowering and dropping his voice an octave he can pass for an outlaw adult. Cooper is a better choice for Dino; he mans the wheels of his swank cars with the shifty-eyed intensity of a guy watching porn in his work cubicle. And Poots recalls English actresses of 40, 50 years ago — the enormous eyes of Rita Tushingham, the fetching, platypus mouth and careless sex appeal of Susan George — and is nearly plausible as a capable racer. Still, it’s not until the last lap of their 45-hour cross-country journey that Tobey lets the girl drive so he can take a fast nap before the Mendocino finale.

It will not surprise you to learn that character complexity is not why people — do I mean only men? — go to car movies. Directed by stunt coordinator Scott Waugh in an ambitious step up from his Navy SEALS superhero picture Act of Valor, Speed gets souped up with eight to 10 action scenes, from a drag race through the streets of Mount Kisco and a police chase through Detroit to the Mendocino gig ending at the Point Arena lighthouse — a berserk Baedecker tour of the Lower 48. Waugh also showcases fast driving against the traffic, the chaining of a cop car to a gas-station pump and a high-speed refueling of the Mustang from the gas nozzle of his crew’s van driving next to it. Call it rampant assholery or just cool guy stuff.

Besides filching plot lines from ’70s car-crazy films like Vanishing Point, Death Race and Dirty Mary Crazy Larry, Waugh has the big lug nuts to show a clip from Bullitt, the 1968 movie starring the original Steve Queen that provided the blueprint for urban car chases. Yet Waugh backs his nerve with cinematic verve — as long as you suspend the usual disbelief and don’t tot up the damages to the cars and lives of cops and civilians. The stunts, like the best ones in the Fast & Furious films, are often primally thrilling. They work on the most primitive part of the brain in the most sophisticated manner

Need for Speed is also going up against its own video game, which has sold something like 150 million units over its 20-year span. But video races, even with the viewer at the digital wheel, can’t compete with a movie version of the real thing, executed by insane geniuses who put their lives on the line so you can pretend to risk yours. This is cinema reduced or distilled to its purest definition, of movies that move. If you want dewy humanity in your entertainment, watch Lifetime. 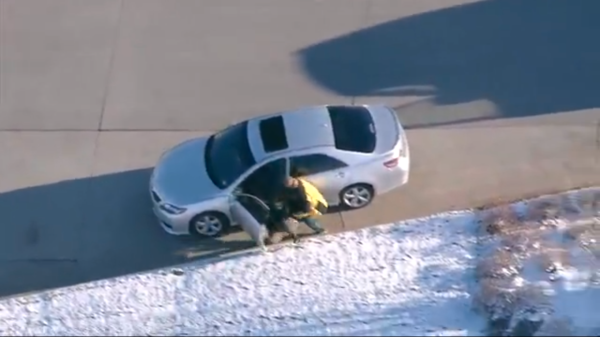