Rape Survivors Talk About Why They Tweeted Their Stories

JoAnne Cusick was wearing a pink floral sundress and jelly sandals when she was sexually assaulted at the age of eight by a group of neighborhood boys. Believing that she was to blame, she kept the secret for nine years until she told a priest about the attack during confession. He assured her that she was innocent in the eyes of God, and the eyes of the world.

Twenty-eight years later, Cusick, now a 37-year-old nurse living in Colorado, shared that secret on social media joining hundreds of other victims who tweeted their stories of assault. These women (and a number of men) were responding to a simple question that went viral on Twitter Wednesday night asking victims what they were wearing when they were assaulted. Within hours, a long list of outfits—ranging from sweatshirts to pajamas to bathing suits—accompanied by stories of rape and assault filled Twitter feeds, replacing the normal news items and GIFs.

The huge response ignited a conversation on social media and blogs among victims and health professionals as to whether sharing stories on highly public, semi-anonymous social media forums could be a healthy step in the recovery process—a way to make those who’ve been assaulted feel less alone, less stigmatized and shamed. Or does sharing leave survivors open to online shaming and undermine a more traditional route of coping, like therapy?

The debate started when Christine Fox, a young woman who tweets under the handle @steenfox, got into an argument on Twitter with a follower who insisted that women who wear revealing outfits are at fault if they are sexually assaulted. Fox invited those on the social media network who had been victims of rape or sexual assault to tweet the outfits they wore at the time of the attack in hopes of convincing this man not to victim blame.

“I was trying to make him understand that it absolutely does not make a difference, and that the responsibility does not lie on women,” she told The Root. Over the next several hours, Fox received hundreds of replies. With the users’ permission, she retweeted stories as she received them.

The campaign of sorts took on another life when Adrienne Simpson from Philadelphia, who has never been a victim of sexual assault, saw the conversation on Twitter and thought that it could take on a new visual format. “I am a marketer, so I think in campaigns and imagery,” she tells TIME. “I was thinking they need pictures with this because that’s what’s going to drive home the idea that you can have on corduroy pants and a camouflage shirt—there’s nothing remotely sexual about that—and this can still happen to you.”

She created five images from the texts of five tweets that caught her attention: the camouflage shirt and cords a 15-year-old had been wearing; a school uniform (buttoned-up polo, knee-length khaki shorts) worn by a 13-year-old; a sundress a 19-year-old was wearing to Church on Sunday when she was raped by her 50-year-old minister; jeans and a hoodie for a 22-year-old girl who was acting as a designated driver at a party and whose soda was roofied; and—the one that got the most retweets all night—the Barney pajamas worn by a seven-year-old when she was raped.

She added a hashtag: #RapeHasNoUniform. “I think as a victim, when you speak out, you want it to matter. The bigger this gets, the more it matters. I think it should be an organized, public campaign.”

But without expecting attention or publicity, many just tweeted in the hopes of helping others. “[The assault] had nothing to do with anything I did. And I think hearing one survivor being able to say that is a good for people who may still be blaming themselves,” Cusick tells TIME. She has shared her story with friends before, and says she felt comfortable opening up on Twitter.

Sarah Webster said she tweeted with a similar motive. Webster has tweeted about her assault in the past and says that nothing is too private for her to share on her account, which is focused on sex and body image. During the course of the Twitter conversation, the question of whether most assailants are strangers or not arose, and Webster decided it was important to share her story. Webster says she was raped by someone she was very close to and hoped her experience would show others that even those you trust can be perpetrators. “I was sexually assaulted by someone I knew, and at the time I wasn’t wearing anything at all. It was in my home by someone who was never supposed to do that to me,” she says. “I wanted to contribute another side of the story.”

Scott Berkowitz, the President and Founder of the Rape, Abuse and Incest National Network (RAINN) was not surprised that seeing so many people share the same experience on Twitter motivated people to share their stories for the first time. “Having this whole community of other people who have been through something similar can be really empowering for people,” he says. “I think there’s safety in numbers. We see that in a lot of scenarios with sexual assault survivors. When there’s allegations, say, against a particular priest that becomes public, suddenly many other people who were abused by that person are okay with coming forward.”

Those who posted compared the spontaneous movement to Take Back the Night and Slut Walk—two organized campaigns that have aimed to create safe environments for rape victims to share their stories, debunk the notion of victim blaming and restore safety to campuses and neighborhoods. The popularity of such projects proves that large groups of victims speaking out can bolster other survivors’ confidence. But unlike past movements, this one took place on social media, which can be simultaneously both anonymous and extremely public.

Anyone on the Internet can read your tweets; and anyone on Twitter can respond to them. You can choose how much information you share about your real identity in your Twitter profile. Some shared their experiences anonymously; others had names and faces attached to their profiles and hence, their stories. Either way many thousands of strangers read their tweets, a fact that became controversial when some media outlets reprinted the tweets and were accused of doing so without everyone’s permission. An argument ensued as to whether tweets are public or private and whether extra consideration should be given to sensitive cases such as this one.

The anonymity, after all, is exactly what convinced some victims to share their stories. Many of those who posted who I interviewed said that though Twitter was public, their family didn’t know that they tweeted and were unlikely to see the tweets. Sharing their story on Twitter with other survivors felt safer than sharing on someplace like Facebook where their tight circle, that might include family members who don’t know about the assault or even the assailant him or herself, might be able to see.

RAINN has found that some anonymity helps those who have never shared before. “We launched an online hotline in 2006 to compliment our telephone hotline because we were finding that younger victims in particular just weren’t comfortable picking up the phone and saying out loud what happened to them,” says Berkowitz. “But that sitting in the privacy of their room at their computer with at least a measure of anonymity there that they tend to open up much more.”

But that’s an anonymous hotline. Twitter is a public forum, where there’s always gong to be backlash. “In a [therapy] group, you generally sign a confidentiality agreement. There are no agreements on Twitter. Nobody cares about you. It’s the Internet,” says Nicole Aghaaliandastjerdi who shared her experience and now runs a women’s abuse support group in Louisville, KY. Along with all the supportive messages came the the kind of slut-shaming that originally spurred the conversation. “I remember someone was tweeting, ‘Look at all the damaged goods.’ That was really hard for even me to read, and I’m pretty far along in my healing process.”

Despite such comments, Aghaaliandastjerdi focuses on the good that came out of it, like her friend who had only shared once before but decided to participate on Twitter. “That was huge for her. For a lot of people, they’re taking back whatever had been taken from them. They’re claiming it and giving the story a different kind of power.”

Indeed, many first-time sharers found safety in numbers. Clifford Johnson, 31, hadn’t shared his story before except with a few close family members. “When I think about it, it kind me feel like a little less than a man—just the fact that it happened.”

But seeing others share their story and the ease of tweeting allowed him to post. “I don’t think I intended to go that deep. I almost deleted it because I didn’t know if I wanted this out there.” But as people began to respond he changed his mind. “It was a forum for the first time I was able to say what happened and get feedback from other people who went through the same thing. Plus, everyone there was a woman, you know? And it just kind of got me to thinking about things that happened to me as a child, and I wanted to put it out there to say, ‘It doesn’t matter what you’re wearing. It doesn’t even matter your race or sex. It could happen to anybody.’”

The experience made him want to become involved in advocacy for male victims of rape.

The Twitter conversation was a healing process for many of those who participated. The majority of responses were ones of love and support from strangers.

“What made me feel okay is that it’s so much more prevalent than one might initially think. Even though in my personal network that I follow I didn’t see anyone else respond, the fact that there were so many people responding to the question made me realize it’s not an uncommon thing,” says Ayanna who wanted her last name to be withheld and tweeted despite the fact that her ex-boyfriend and assailant still follows her on social media. “Some women tweeted at me who had been through the same thing. They really identified with what I said and it made me feel validated in my decision.”

Of the seven assault survivors I interviewed, none regretted having tweeted.

“I’m sure hundreds of people probably woke up today with a heavy burden lifted off them,” Johnson says. 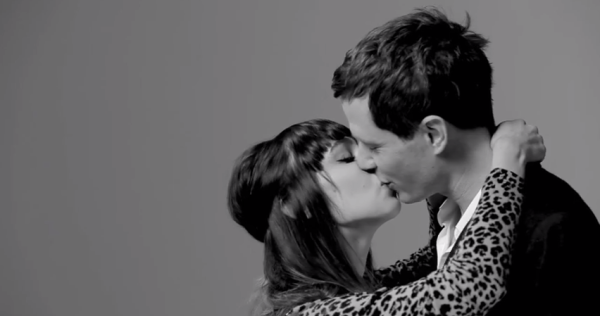 Filmmaker Asks 20 Strangers to Kiss For the First Time
Next Up: Editor's Pick