Andy Karl as Rocky Balboa and Terence Archie as Apollo Creed in ROCKY on Broadway.
Timothy Saccenti for TIME
By Richard Zoglin

When the sides of beef descend from the rafters, in the meat locker where Rocky Balboa will soon be training for his big championship fight, there’s a happy buzz of recognition. When Rocky cracks raw eggs into a glass and gulps them down, the audience cheers. When, after a fevered month of training, he climbs the last step of the Philadelphia Museum of Art and punches the sky, the theater goes wild.

Rocky, the new Broadway musical that has just opened at the Winter Garden Theatre, earns a lot of goodwill the easy way — by reproducing famous scenes from the 1976 Sylvester Stallone film on which it is based. But the show does more difficult things well, too. It breathes fresh life into a movie franchise that long ago descended into camp; puts singing boxers onstage without drawing snickers; and turns an unlikely film property into a Broadway musical with both spectacle and heart. The show is a crassly commercial exercise, aimed squarely at the tourist crowd and not the New York critics — who will most likely make fun of it. ButRocky the musical is no loser. It lands.

Let’s start with the movie. Forgot all those unnecessary sequels (five of them): the original 1976 film, written by and starring a then-unknown Stallone, was a good, gritty little film, with some real street authenticity, an affecting love story and an irresistible underdog hero. It’s unmistakably a product of the ’70s: Apollo Creed, the showboating heavyweight champ, was a satirical version of Muhammad Ali, and Stallone’s inspiration was to match him against a working-class grinder with no retinue, no media savvy and no aspirations other than to go 15 rounds without getting murdered. The showhorse versus the plowhorse, Hollywood versus middle America — the perfect allegory for America’s Bicentennial year.

On Broadway, Tom Meehan’s script follows the movie faithfully — a little too faithfully in the efficient if somewhat bland first act (which has been trimmed since the early preview I saw). Still, I was impressed with how carefully director Alex Timbers builds the relationship between Rocky and his mousy girlfriend Adrian. The wooing — from the pet shop where she works, to the ice skating rink where he takes her on a first date, to his grungy apartment, where he gets her to take off her glasses — is actually better staged and more emotionally true than the other big movie romance that just arrived on Broadway, The Bridges of Madison County.

The cast is almost perfect. Andy Karl, a hunky Broadway journeyman (Jersey Boys, et al.), captures the shambling Stallone walk and just enough of his slack-jawed, street-hood voice without turning into parody. Margo Seibert, as Adrian, pairs well with him and sings beautifully; veteran character actor Dakin Matthews is a superbly crotchety Mickey, the old-timer who becomes Rocky’s manager; and Terrence Archie, with his shaved head and Mr. Universe body, is a charismatic Apollo Creed. The only misfire is Danny Mastrogorgio, a good actor who seems too sharp-witted and self-assured in the role of Adrian’s no-account brother Paulie, memorably played by Burt Young in the movie.

I was about to pronounce the score, by Broadway reliables Lynn Ahrens and Stephen Flaherty (Ragtime), the show’s biggest weak spot. But after two hearings, it has started to grow on me. The power ballads are a little lacking, and the lyrics often clunky (there’s a limit to how much lyrical inspiration you can draw from repeating the phrase “Rocky Marciano”). But Rocky’s character-establishing opening number, “My Nose Ain’t Broken,” has a nice, country-flavored melody that holds up through several reprises; Rocky and Adrian’s love song in the ice rink, “The Flip Side,” has a pretty carousel-waltz infectiousness, and their later duet, “Happiness” is a sweetly offhand little heart-warmer.

The show cheats a bit by supplementing the new songs with excerpts from the famous Bill Conti Rocky theme music and Survivor’s “Eye of the Tiger” from Rocky III. But it’s hard to complain. Timbers (the director of hip downtown shows like Bloody Bloody Andrew Jackson and David Byrne’s Here Lies Love) uses them to accent the galvanizing training scenes, staged with video backdrops of the Philadelphia streets, sweatshirted doppelgangers of Rocky and Karl himself doing some slick jump-roping and the best running in place on Broadway.

The big championship bout gives you everything you want in a splashy stage climax and more. The ring is rolled out into the audience, as patrons in the first few rows are reseated in bleachers onstage. The punches (choreographed by Steven Hoggett) come fast and furious, the blood and sputum fly, time is compressed or speeded up or stretched out with cinematic stop-action effects, as announcers on giant TV screens overhead call the action breathlessly. It builds to a rousing finale, abrupt yet so satisfying that you hardly realize this is a rare musical that doesn’t end with a song. Rocky was always an unorthodox fighter — but in his first Broadway bout, he takes the punishment and gets the job done. 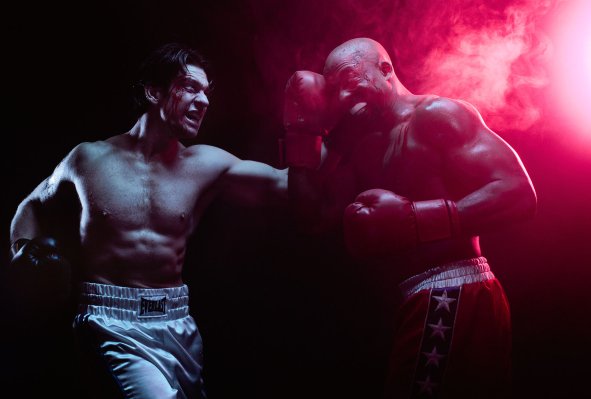 Rocky Balboa Punches on Broadway
Next Up: Editor's Pick