I’m the father of two boys, which means I’ve had plenty of exposure to the world of other boys. Most of them are delightful. Some are… a challenge. They push. They cut in line. They hog the ball. They know the answer, ooh, teacher, call on them, over here, over here! They want to play the game this way, because it’s the right way. They specifically requested that the peanut butter go on top of the jelly, not the jelly on top of the peanut butter because, ugh, God, disgusting!

They are, in other words, bossy boys. They may become leaders and found companies for which someday I will work and later be downsized. They may be profiled in magazines and be admired for their “executive leadership skills.” But they are also a royal pain in the ass, and I’d rather live in a world that encourages their behavior as little as possible.

Which is why the Ban Bossy campaign, from Lean In and the Girl Scouts, struck a chord with me — but only to a point. As Lean In’s Sheryl Sandberg says, correctly, the problem with the term “bossy” is that we apply it more often to girls, while boys with the same traits are considered “assertive” and “aggressive.” Her solution: stop calling your daughters bossy.

The double standard Sandberg identifies is absolutely real. But why is the solution to encourage aggressive, domineering behavior in women, rather than discouraging it in men? I know plenty of obnoxious, bossy men. And maybe society does applaud them. But I don’t want to be around them, I don’t want to work with them, and I certainly don’t want to work for them. Who likes “assertive, strong, dominant leaders”? Other assertive, strong, dominant leaders. That is, pushy jerks.

It’s fantastic that people are examining double standards at home, in the workplace, in relationships. But in every case, we seem only to be able to resolve them on the terms that are most friendly to corporations and shareholders, easiest on the bottom line, least threatening to, well, bosses.

Work-life balance, for instance, is a real problem that holds back women’s careers. So could we address it with more maternity and paternity leave, shorter hours, more telecommuting, more mommy- daddy-tracking with less punitive consequences? Nope! Not in the budget! Instead, we get an offer of greater equality, but only equality that replicates the crappiest behavior of stereotypical men, that idealizes the goal of having everyone be type-A workaholic drones.

As a man, obviously, I haven’t been on the women’s end of these double standards, and they hurt women far more than they do men. But they also benefit a specific type of man — the human steamroller, the guy who sees his kids maybe on weekends — who we shouldn’t be trying to emulate. The stereotypes that say that a woman who is ambitious at work is a bitch are the same stereotypes that say a man who lets his job take a backseat to his family is a wuss.

By all means, if you feel the urge to call a girl bossy, think about where it comes from, whether it’s merited, whether you’d say the same thing to her brother in the same situation. But if you don’t want to live in a world of, by, and for the bossy, ask yourself why you’re not calling her brother bossy — and whether maybe you should.

And if he doesn’t like it, he can spread his damn peanut butter and jelly himself. He’s not the boss of you. 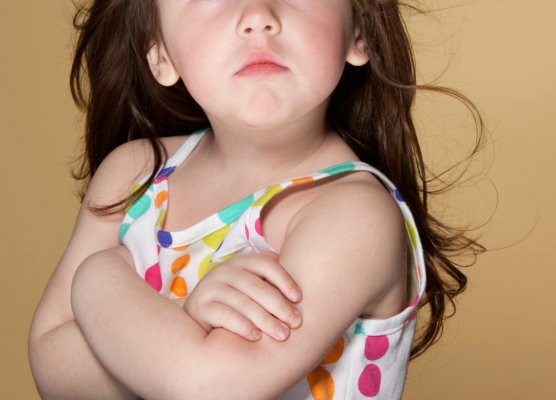 Dad: I'm Going to Keep Calling My Daughter Bossy
Next Up: Editor's Pick