Russian Foreign Minister Sergey Lavrov (L) and US Secretary of State John Kerry stand together before a meeting at Winfield House in London on March 14, 2014.
Brendan Smialowski—AFP/Getty Images
By Maya Rhodan and Nate Rawlings

Secretary of State John Kerry and his Russian counterpart Sergey Lavrov met in London on Friday in Kerry’s latest attempt to keep crisis at bay amid Russia’s intervention in the Crimea region of Ukraine, but Lavrov emerged saying there’s simply no “common vision” between the U.S. and Moscow.

The meeting came ahead of Crimea’s planned vote Sunday on a referendum to split from Ukraine and join Russia. The United States and European Union have threatened greater sanctions against Russia if that happens. Calling his six-hour talk with Lavrov “frank” and “constructive,” Kerry acknowledged a stalemate.

“We continue to favor a direct dialogue between Ukraine and Russia as the very best way to solve the crisis,” Kerry said. “The foreign minister made it clear that President [Vladimir] Putin is not prepared to make any decision regarding Ukraine until after the referendum on Sunday.”

Kerry also criticized the “hooliganism” of “some young people” who have crossed the border from Russia into Ukraine in recent days. And he reiterated that the U.S. and the international community will not recognize the outcome of the Crimea referendum as legitimate.

“There will be consequences if russia does not find a way to change course, and we don’t say that as a threat, we say that as a direct consequence of the choices russia may or may not make here,” he said.

After the talks, Lavrov told reporters that key differences remain between the Washington and Moscow. He said that the talks were useful, but there is no “common vision” between the U.S. and Russia. Lavrov insisted that despite the troop buildup on the border, Russia has no plans to invade southeastern Ukraine, but Russia thinks the rights of the people living there should be protected. “Everybody realizes how important Crimea is to Russia, what Crimea means to Russia,” he said. “It means more to Russia than… the Falklands to Britain.”

Kerry went into the talks with a clear message: If the referendum goes ahead, Russia will find itself economically and diplomatically isolated. While Kerry didn’t specify planned sanctions, a senior state department official told CNN ahead of the talks, “there will be costs” for Russia if the referendum moves forward. Kerry briefed senators on the possible sanctions on Tuesday, broadly listing plans for visa sanctions, banking sanctions and targeted individual and business sanctions. “I don’t want to go into all of the detail except to say this: it can get ugly fast if the wrong choices are made,” Kerry said. “And it can get ugly in multiple directions.”

Ahead of the planned referendum on Sunday, Russia has massed thousands of troops along the Ukrainian border, conducting exercises that are designed to be a blunt reminder of Russia’s military capabilities. According to Russia’s defense ministry, 1,500 paratroopers will be dropped into the Rostov region along the Ukrainian border, and 8,500 artillery troops will conduct exercises with rocket launchers, artillery pieces, anti tank guns and other weaponry. 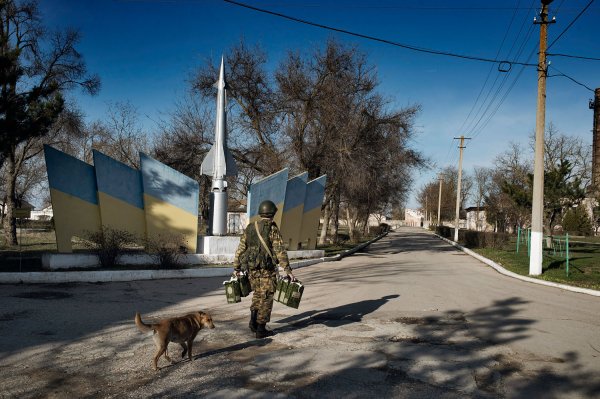