The Cost of War: Syria, Three Years On

Men hold up a baby saved from under rubble, who survived what activists say was an airstrike by forces loyal to Syrian President Bashar al-Assad in the Duma neighbourhood of Damascus, Jan. 7, 2014.
Bassam Khabieh—Reuters
By Aryn Baker

On March 15, 2011, Syrian protestors in the southern city of Deraa, inspired by the revolutions in Tunisia and Egypt, stood against the regime of President Bashar Assad. The initial uprising was peaceful, but as the government cracked down with vicious force, some protestors retaliated. By July, the uprising became an armed insurgency, and eventually evolved into a sectarian-tinged civil war.

Three years on, neighboring nations have been pulled in, contributing fighters, weapons, financing and technical assistance to the rival sides. Russia, Iran and the Lebanese militia Hezbollah back the government, while Western powers, along with Gulf states and Turkey, support various factions among the rebels. All wars are devastating—and the Syrian civil war war has taken a horrific toll on the civilian population. At 2.5 million, spread between Jordan, Lebanon, Iraq and Turkey, there are now as many Syrian refugees as those exiled from Afghanistan’s wars in the 80’s, 90’s and 00’s. It’s a grim benchmark and potent reminder that it takes decades for the wounds of war to heal.

What three years of war in Syria have wrought:

A GENERATION SCARRED FOR LIFE

According to the Syrian Observatory for Human Rights, 146,000 Syrians have been killed since fighting began. At least 10,000 of the dead were children, says a new report by UNICEF, the United Nations Fund for Children, the highest recorded number of children killed in any recent conflict in the region. An estimated 9 million Syrians have been displaced from their homes, including 3 million children, and according to UNICEF, 2 million children will need some sort of psychological support. With one in five schools destroyed, damaged, turned into shelters or taken over by armed forces, half of Syria’s school-age population is missing an education.

HEALTH CARE ON THE LINE

Syria once boasted one of the best government-funded health care systems in the Middle East. But according to a new report by the Save the Children charity, some 60% of Syria’s hospitals have been damaged or destroyed, and half of the country’s doctors have fled. Life saving medicine is in short supply, and in some cases patients have asked to be knocked out by metal bars rather than go through surgery without anesthesia. Once-manageable chronic diseases like diabetes and cancer have turned into death sentences. Since the start of the conflict, the report says, 200,000 Syrians have died from chronic illnesses because of a lack of access to treatment and drugs.

Polio, which had been eradicated in Syria since 1999, has reemerged, permanently paralyzing at least 17 children. A suspected case in a Syrian refugee settlement in neighboring Lebanon has raised fears of a wider spread.

AN ECONOMY IN RUINS

Syria used to have one of the best lowest unemployment rates in the region, less than 10% before the war. Now fewer than half of Syrians have a job, according to an assessment by German Broadcaster Deutsche Welle. International sanctions have driven down exports, particularly in the oil sector: Syria used to produce 400,000 barrels per day, and now it’s down to half that. Sixty percent of Syrians live in poverty, twice the pre-war number. The country’s GDP, which was growing at 3.24% in January of 2011, was negative 2.3% a year later, according to World Bank estimates. Tourism, which once contributed 12% to GDP, is non-existent.

The war has seen devastating attacks on the country’s archaeological heritage. All six of Syria’s UNESCO world heritage sites have been damaged by rocket, tank and small arms fire, according to the Global Heritage Fund, which details the destruction of the country’s historical sites. Regional museums have been looted, as have thousands of half-excavated archaeological sites. Aleppo, one of the oldest continuously inhabited cities in the world, has borne the brunt of the destruction. The wooden gates of its medieval citadel have been smashed, and a fire sparked by fighting destroyed around 500 shops in the ancient, 7.5-mile long covered market. Byzantine mosaics have been lifted wholesale from the Roman and Greek ruins of Palmyra, and soldiers and rebels now occupy several other significant heritage sites. 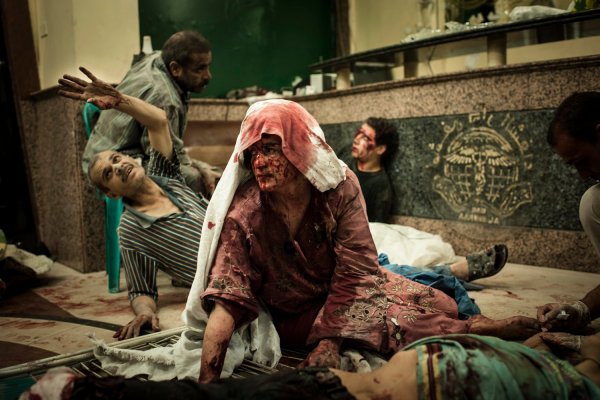 Syria’s Agony: The Photographs That Moved Them Most
Next Up: Editor's Pick