Prison Inmates in Thailand Fight Foreigners for Their Freedom

Moo doesn’t seem like someone with 23 years of a 24-year sentence left to serve. His career as a driver for a drugs gang ended when he was nabbed piloting a carload of yaba, a methamphetamine derivative that translates literally as “crazy drug.” Now the 22-year-old spends 13 hours each day with four other men confined along to a 1.5 x 3.5 meter cell. “I made a big mistake,” says Moo. “And I’ve paid the price for what I did.”

Yet Moo is remarkably upbeat when we meet him in Bangkok’s high security Klong Prem Prison, notoriously dubbed the “Bangkok Hilton” by overseas residents. His levity is due in part to a unique quirk in the Thai correctional system that allows inmates to use their pugilistic potency to shave years off their sentence. “From now on I only want to do things that can enhance my life such as using my boxing skills,” Moo says.

Muay Thai (Thai kickboxing) tournaments have been a fixture of prison regimes in the Southeast Asian nation for centuries. The tradition of holding bouts behind bars started in 1767 when the Burmese took thousands of Thai soldiers prisoner after the downfall of Thailand’s then capital Ayutthaya. While incarcerated, the best Thai boxers were coerced into fighting Burmese combat experts. The ultimate champion, as legend tells it, was a Thai named Nai Khanomtom, who was granted his freedom after besting one of the Burmese monarch’s top fighters.

This ancient tradition of favoring prisoners skilled in the ring is alive and well in Klong Prem and other Thai prisons. But while inmates fight literally for their freedom, international Muay Thai fighters from around the world are now flocking to enjoy a truly unique experience, as well as earn peerless bragging rights.

“It was a special feeling to test my Muay Thai skills out in a Thai prison,” says Alexei Vignol, a 20-year-old from Lyon in France who was narrowly beaten in Klong Prem recently. “I guess you could say that it is intimidating to fight criminals inside a high security facility, but if you get scared by that then you shouldn’t be a boxer.”

The incorporation of foreigners has been spearheaded by an independent organization named Prison Fight. Billing itself as a charity, Prison Fight provides sport equipment, modest financial rewards — inmates’ winnings are squirrelled away in a prison account and used to provide for their families — and, most importantly, offers the successful a realistic chance at getting their sentences reduced.

“We do this to give the fighters an experience and also to give something back to the country,” adds Kiril Sokur, the Estonian businessman behind the Prison Fight enterprise. “Giving these guys [the prisoners] the opportunity to prove their talents is important. They may be criminals but they are also human beings so staging the fights is good karma for us.”

During a recent visit to Klong Prem, we encountered an atmosphere that was surprisingly convivial. As training took place in the ring set up in the prison yard, prisoners clowned around with each other, shadow boxing and dishing out playful clouts. One wiry, grinning inmate with intricate tattoos covering his entire torso, was a particularly energetic presence. “That’s Chui,” said Nikki. “He’s a hitman.”

Section 5 is for Klong Prem’s lifers. It is also the unofficial Muay Thai wing of the prison. Criminals with previous boxing experience like Moo and his cellmates are placed here upon entering Klong Prem. Guards, meanwhile, scout out candidates from other wings for a possible transfer. A long, wide central corridor that separates the cells is used for twice-daily hour-long running sessions. A boxing ring and rudimentary training equipment dominates the outside yard.

We find Moo with his cellmate Pod at the side of the ring. The friends are regarded as two of the best fighters in Klong Prem and both were little troubled by their foreign opponents at the Prison Fight event.

“It helps us focus our minds,” adds Pod, 35, who collected debts in Bangkok’s infamous Nana Plaza red-light district and has served eight years of a life sentence for murder. “Life here is really boring. The days are long and always the same. Boxing provides distraction and there’s also the chance of getting your time shortened if you become a champion.”

Despite the historical context, granting convicted felons parole for sporting prowess is still controversial. Healthy distraction in the prison yard is one thing, but why should convicted drug runners and murderers earn their freedom with their fists?

“Muay Thai fighters command a lot of respect in Thailand,” says Surawuth Rungrueng, the guard responsible for encouraging the development of boxing in Klong Prem. “It encourages discipline and focus, which is something that that these guys lost somewhere on the outside.”

Sentence reduction is not automatic and if a prisoner behaves badly he won’t be put forward, no matter how skilled he is. “But if a prisoner shows real commitment to improving himself then we are willing to offer incentives,” says Surawuth

Needless to say, the prisoners seize the opportunity. Moo and Pod, relaxed a few minutes ago, burn with intensity inside the ring — hooded eyes fixed, they rain vicious kicks and punches upon the body padding that protects their sparring partners. Chui, the grinning hitman, is also a blur of ferocious movement next door.

“Most of them will be here until their hair grows grey,” admits Surawuth. “The respect Muay Thai affords them is one of the things they can hold onto.” And a little hope never hurt anyone. 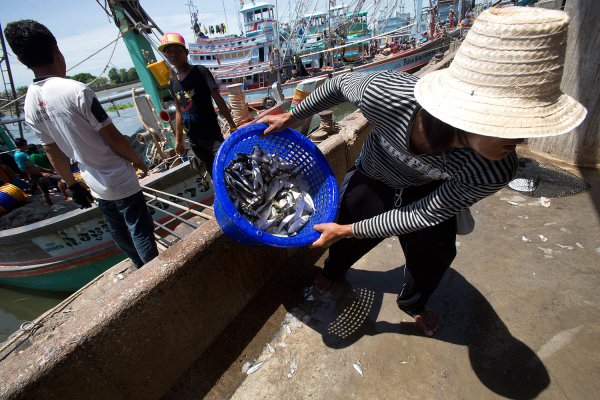 Child Slaves May Have Caught the Fish in Your Freezer
Next Up: Editor's Pick