Refugees in Our Own Country

When we think of people fighting for freedom, we often think internationally: Malala Yousafzai insisting on an education, Jasvinder Sanghera advocating for the end of forced marriages, Hillary Clinton championing the rights of women around the world “to participate fully in the social and political lives of their countries” — but perhaps we should turn our attention to our own backyards. Here in the New York area, there are thousands of women and men waging a largely invisible battle for their right to equality, education and a self-determined life.

A few months ago, a fellow activist asked me to visit a woman I’ll call Rachel. When I showed up at Rachel’s door, her face wrinkled in concern. “How could you come like this,” she asked, hurrying me inside. “Do you know how much trouble you can get me into?”

I had made the mistake of wearing trousers. A female visitor in pants could jeopardize Rachel’s job and put her children at risk of expulsion from school.

I hadn’t been adequately briefed, but Rachel quickly filled me in. She was 26 years old, had four kids and an abusive husband. She wanted out. She wanted to raise her children in safety. She wanted the freedom to uncover her hair, pursue her education, and teach her kids the wonders of science and the beauty of diversity.

But Rachel knew that she could not leave. She, like I once had been, was a member of the ultra-Orthodox Jewish community, and the obstacles placed in the path of those from that group who reject conformity for individualism, are daunting. If Rachel chose freedom, her community might hire her husband a top lawyer, supply him with religious psychologists and powerful rabbis to testify that Rachel was an unfit parent, and might even persuade Rachel’s own family to testify against her, ensuring she lost custody of her children. Almost every man or woman who wants to break free from ultra-Orthodoxy risks this heart-breaking price that too many have already paid.

We send troops to Afghanistan to liberate the oppressed women there, Rachel said to me, but no one seems to give a damn that there are thousands of people in New York City living in similar conditions.

According to the Pew Research Center’s recent study, there are approximately 400,000 ultra-Orthodox Jews in the US, with the vast majority living in the New York metro area. Ultra-Orthodoxy includes many different sects, both Hasidic and non-Hasidic, who generally abide by strict laws of semi-isolation, limits on the public presence of females, restrictions in dress, and expectations of obedience to a hierarchy of rabbis. Life revolves around the Sabbath, holidays, weddings, bar mitzvahs and circumcisions. Marriages happen young, after chaste non-romantic courtships that range from half an hour to a few weeks. With birth control largely forbidden, children soon follow. Self-sufficient educational systems, businesses, kosher restaurants and media platforms ensure that the community’s members need not step outside the invisible walls of their self-created shtetl. Attending university, studying mainstream philosophy or using the internet are mostly forbidden. Continuously augmented rabbinical edicts, modesty patrols, pressure to maintain a “spotless” reputation in order to score a good marriage match and the harsh treatment of rebels, help keep dissenters in line.

While there are urgent needs for reform within these communities, particularly regarding sex abuse cover ups and the treatment of women, there is also much that is beautiful and admirable about the ultra-Orthodox lifestyle that commands respect. But a closed community’s right to unquestioned privacy and autonomy becomes threatened when the exit routes out of that community are blocked.

When a man or woman tries to explore beyond ultra-Orthodoxy, to move in the direction of a self-determined life, not only do they often have to deal with a serious educational deficit (most ultra-Orthodox boys receive no high school math, science or English education) and an absence of interpersonal skills needed to integrate in a gender-mixed and diverse society, but they can also face threats of physical violence, estrangement from parents, siblings and friends, lose their job, and have their children taken from them in vicious custody battles where the ultra-Orthodox spouse is bolstered by the financial, emotional and political resources of their community — this being the consequence Rachel feared the most. In November, the suicide of Deb Tambor, a woman who had left ultra-Orthodoxy and subsequently lost custody of her three children, highlighted the anguish former ultra-Orthodox Jews often face in their struggles for freedom.

I myself know well the costs of pursing freedom. When I was 16, my parents pushed me out of the family after a culmination of rebellions that included talking to a boy, wanting to go to college, and wearing an immodestly form-fitting sweater.

Raised to be obedient to God and the men who ran my community, reliant on the emotional cushion of my family of 13, and shaped for a future as a housewife, I had few tools to survive alone in the larger world. In the years that followed, I struggled with extreme poverty. I was raped. I cut my skin with razor blades as I battled a crushing sense of shame and guilt for my choices.

Eventually, I made it through. I built a new life. I earned a degree in psychology as a night student, and then a graduate degree in public policy at Harvard. I’ve since started a new family, found a new community for myself and engaged in activism to empower other former ultra-Orthodox Jews. I’ve written a book about my experience, recently published, “Cut Me Loose: Sin and Salvation After My Ultra-Orthodox Girlhood.”

I know there will be a backlash for sharing my story, but it was a choice worth making to spread an important message: We spend billions of dollars importing American values of freedom to other countries. We’d do well to support brave men and women like Rachel, refugees in their own country, seeking the same. There is a growing community of former ultra-Orthodox Jews fighting for the rights many of us take for granted. We should support them in their struggle, and urge the ultra-Orthodox community to do so as well. 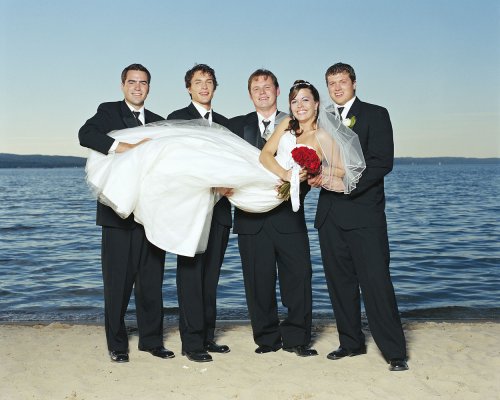 One Husband Can't Save a Low-Income Woman from Poverty—She'll Need Three or Four
Next Up: Editor's Pick