Four times a year, the Oxford English Dictionary lets down its drawbridge and invites a select few new words into the kingdom. On Thursday, roughly 900 new terms made their first appearance in the reference.

That might sound like a lot, but one has to keep in mind that the dictionary covers everything, not just words average people use in daily conversation. Among the new entries, for example, are drool-inducing adjectives like ethnopharmacologic and now-extinct creatures like the scimitar-horned oryx. (We’ll pour one out for you, Ory.)

But there are also plenty of terms we know and love, that, for good or ill, reflect who English-speakers are and how we treat each other. The transitive verb, to toilet-paper, for example—meaning “to cover (a building, trees, etc.) with toilet paper, typically as a prank”—is now in the official record. As is the noun honey trap, a stratagem by which an attractive woman entices a weak and foolish man into revealing information.

Anyone who peruses the full list of the most recent additions will notice chunks of related words. There are, for example, nearly 30 words that contain honey. That’s because the editors of the OED are primarily updating the dictionary by reviewing important clusters of words—rather than plodding through from A to Z—because, they reason, those are the words that people are most likely to look up.

It’s worth noting that it’s much harder for a word to make the cut here than for one of the Oxford Dictionaries Online additions. The latter is meant to reflect current usage, which is why it already contains quasi-words like lolz and mwahahaha, while the OED aims to be a definitive historical catalog.

Here is a selection of other terms that are now appearing in the OED for the first time:

bathroom break (n.): a short period of time within the duration of an activity (often of a prescribed or limited duration) taken to use the toilet.

beatboxer (n.): a performer who uses (amplified) vocal effects to imitate the sounds and rhythms of hip-hop music.

crap shoot (n.): a situation or undertaking regarded as uncertain, risky, or unpredictable.

dead white male (n.): a dead Caucasian male writer, philosopher, etc., whose pre-eminence is challenged as disproportionate to his cultural significance, and attributed to a historical bias towards his gender and ethnic group.

DIYer (n.): A person who engages in do-it-yourself activities; an amateur (in construction, repair, etc.).

do-over (n.): an instance or chance of doing something for a second or further time, after an unsuccessful or unsatisfactory first attempt.

honky-tonker (n.): a person who owns, works in, or frequents a cheap, sleazy bar or nightclub, typically one where country music is played.

scissor-kick (v): to perform a kick which involve a scissor-like motion of the legs, as in swimming or soccer. 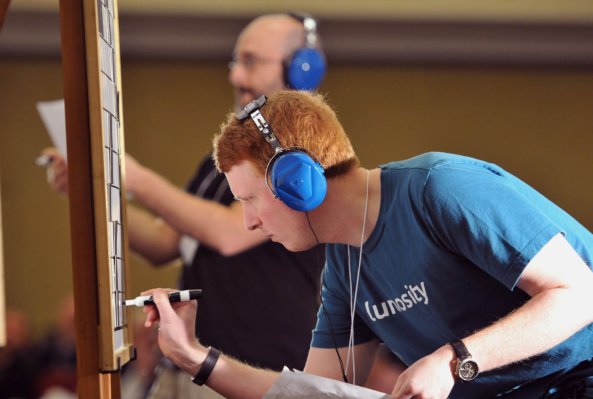 Inside America's Biggest Crossword Puzzle Rivalry
Next Up: Editor's Pick