Ordeal of a Dying Child Captures the Tragedy of Syria

Feryal Delly, a Syrian refugee, gives water to her 4-year-old son Zacharia on March 9. Zacharia, who has a brain tumor, lives with his family in a rented apartment in Halat, north of Beirut.
Lynsey Addario—UNHCR
By Aryn Baker

In a partially completed apartment complex not far from the Lebanese capital of Beirut, 4-year-old Zacharia Delly, the son of Syrian refugees, lies semi-comatose on a tattered foam mat surrounded by his mother and four siblings. His head is swollen to twice normal size, lashed with angry purple veins made visible by his baldness. One eye, open but unseeing, protrudes grotesquely from a crust of dried blood and pus, displaced by a tumor that startled his family with the rapidity and maliciousness of its growth.

His twin sister Sidra gently pulls aside a wool blanket felted with age to expose his skeletal limbs. She strokes his foot and worriedly examines a new gray stain creeping up his shin, the latest manifestation of a vicious cancer that is consuming her brother from the inside out. With her short brown curls, dimpled cheeks and giggles, she is a constant reminder of what Zacharia once was: a bright-eyed toddler who loved hugs more than toys and never left his mother’s side. That is, before war and disease intersected to cut down a life far before its time.

Every tragedy has its if-only moments. Those split-second decisions, looked upon in hindsight that, if taken differently, may have had the power to save a life. For Feryal Delly, a housewife from Homs, Syria, that moment came one day last summer when she was scheduled to take her son Zacharia to his second chemotherapy appointment in Damascus. Zacharia had been diagnosed with neuroblastoma, a common childhood cancer, but the hospital in Homs had been destroyed, so she had to take him to one in Damascus, a two-hour bus ride away. His doctor there was pleased with the first round of chemo and prescribed seven more sessions, two weeks apart. But war stalked Syria, and the road to Damascus was treacherous with checkpoints, both rebel-run and regime. The route was often rocketed, and civilians were frequently detained. Delly’s parents urged her to stay home. It would be 20 days before the fighting calmed enough for her to risk the journey again. By then Zacharia had missed two appointments, and the cancer, which started near his kidneys, had begun to spread. Delly is convinced that it was her decision to stay home that day that made all the difference. “I wanted to take him to the hospital, but I was afraid,” she says, sobbing. “I failed him.”

The three-year war in Syria has taken more than 140,000 lives and driven nearly 9 million from their homes. It has destroyed schools, orphanages and places of worship. But perhaps most egregiously, it has ravaged a government-funded health care system that was once the envy of the Arab world. According to a new report by Save the Children, some 60% of Syria’s hospitals have been damaged or destroyed, and half its doctors have fled. Lifesaving medicine is in short supply, and in some cases patients have asked to be knocked out by metal bars rather than go through surgery without anesthesia. The few hospitals still operating in Damascus are all but inaccessible. Once manageable chronic diseases like diabetes and cancer have turned into death sentences. Since the start of the conflict, says the report, 200,000 Syrians have died from chronic illnesses because of a lack of access to treatment and drugs.

As a result, thousands of families, including Zacharia’s, have fled to Lebanon for the care they could not receive at home. When it became clear that fighting would derail yet another chemotherapy appointment, his family packed for a short trip to Beirut, where they hoped treatment would be easier to find. But the crossing was arduous, and by the time they made it, they had missed the treatment window and tumorous lesions had sprouted on Zacharia’s head. Lebanon was hardly the refuge they had anticipated. While the country boasts some of the finest medical institutes in the Middle East, nearly 90% are privately run, and most of those are for profit. One hospital, known for its children’s cancer ward, turned Zacharia away because the family couldn’t afford the fees. The last photo Delly has of Zacharia standing shows him in front of the hospital’s gaily decorated Christmas tree with his arm around his sister. A few days later he collapsed: tumors had invaded his spinal column. He would never walk again.

Days of frantic searching brought Zacharia’s case to the attention of Dr. Elie Bechara, a children’s cancer specialist at Beirut’s Lebanese Hospital Geitaoui. But the deferred chemotherapy treatments had taken their toll. “There is one golden rule in treating these kinds of cancer: delay is not good,” he says. “Even a small delay can make a big difference.” When Bechara examined Zacharia, his heart nearly broke. His body was so riddled with tumors that only a bone-marrow transplant and experimental immunotherapy, now being tested in the U.S., could make a difference. But the treatment is prohibitively expensive, and the chances of success dismally low. “The only thing we could offer at that point was palliative care” — making him as comfortable as possible as cancer wins the war — says Bechara.

Bechara estimates that Syrians currently occupy 75% of the beds in his hospital. Many can, and do, pay. But Lebanon is likely to play host to hundreds and perhaps thousands more cases like Zacharia’s as Syria’s health care system nears total collapse. The U.N. body that looks after refugees, UNHCR, has spent tens of millions of dollars treating the Syrian refugees that have already crossed the border. But funds are limited, and as the numbers of refugees flowing into Lebanon increase — 1.5 million, more than a third of the Lebanese population, are expected to have registered by the end of the year — costs will rise. With such limited resources, UNHCR is forced to choose between funding preventative care that can save thousands of lives and spending thousands of dollars to save one life. “Lebanon is the size of Connecticut,” says Ninette Kelley, UNHCR’s representative in Lebanon. “Now just imagine what the priorities would be if a million refugees came to Connecticut and needed to use the health care system.”

Last year UNHCR covered medical treatment for 41,500 refugees in Lebanon, but each of those cases was judged on specific criteria: the cost of the intervention against the chances of a positive outcome. Open-heart surgery, hip replacements and emergency dialysis might make the cut. But Zacharia, with his advanced state of cancer, did not meet the threshold. “People’s lives are being saved every day from the treatments we are able to provide. It’s just that the need has greatly outstripped the resources,” says Kelley. “That is what makes the situation we are in today so difficult.” Zacharia, she adds, is the face of a much bigger issue: the toll Syria’s war is taking on the health care system. “It is tragic that this child, who, but for violence in Syria, would have been able to continue treatment at home and live a long and prosperous life, is cut down at the age of 4. Now his family, who has just lost their home, has to cope with the loss of this tiny child. How brutal is that?”

Back in her UNHCR-funded apartment, Delly, the mother, looks on helplessly as Zacharia struggles to breathe. His teeth have been hurting him, and he gnaws his thumb in his sleep. “The doctor in Damascus warned me not to miss an appointment,” she says as she attempts to control her sobs. “He said anything might happen to Zacharia — he could lose his hearing, his sight, his ability to walk. But what could I do? The road was unsafe, and I could have been taken. What would have happened to my other children then?” Sidra, Zacharia’s twin, springs from her brother’s side to wipe the tears from her mother’s face. Delly’s sister Manal attempts to stop a downward spiral of guilt that she appears to have seen a few times before. “Zacharia isn’t sick because of you. He is sick because of this horrible war. If there hadn’t been war, he wouldn’t have missed his treatments and maybe he would have lived another 10 years.” Delly nods reluctantly and looks over at Zacharia’s heaving chest. As guilty as it makes her feel, as long as she can imagine the scenario where Zacharia got to his chemotherapy in time, she can imagine him alive. Letting go of blaming herself means accepting that he is about to die. “I just want to see him play with his sister one more time,” she says. 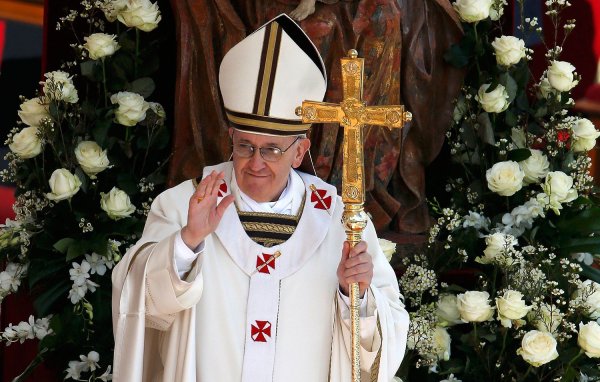 Pope Francis' One Big Mistake: Syria
Next Up: Editor's Pick