Crew members from the Royal Malaysian Air Force look through windows of an aircraft during an operation to find Malaysia Airlines Flight 370 in the Strait of Malacca on March 13, 2014
Samsul Said—Reuters
By Francis Wade / Phu Quoc, Vietnam

Frustration at the sluggish rate at which the Malaysian government is releasing updates on the missing Malaysia Airlines plane has rapidly turned into suspicion — with China, echoed by voices in Vietnam and even inside Malaysia, demanding explanations as to why so much of the information released from Kuala Lumpur has been vague and contradictory.

It has been six days now since MH370, carrying 239 passengers, vanished over the ocean en route to Beijing from Kuala Lumpur. The absence of solid information released by Malaysia, which is leading the search, has been filled with bursts of wild conjecture from officials and media that have compounded the anxiety, confusion and grief of relatives and friends of those missing.

Air-force chief General Rodzali Daud was quoted in local media on Tuesday saying that the plane had changed course toward the Strait of Malacca, sparking rumors that it may not have crashed. Later, however, he denied making the statement, despite a high-ranking official confirming the report. Then on Wednesday, Defense Minister Hishammuddin Hussein said officials had detected radar signals that they thought might be from MH370, but that it had taken them four days to release the data.

Vietnam, one of the first countries to join the hunt for the plane, is among those growing increasingly frustrated by Malaysia’s messaging. Local and international media have spent the past three days lingering in airless rooms at the air-traffic-command center on Phu Quoc Island, southwest of Ho Chi Minh City, awaiting updates. But they have gleaned little. Vietnam has deployed planes and ships to aid the operation, and on Thursday morning scrambled four aircraft following the release of Chinese satellite images that appeared to show large chunks of debris floating in the South China Sea. Pilots returned having spotted nothing.

China’s subsequent admission that the images were released “by mistake” has added further strain to a search operation unprecedented in both size and its extent of multiparty cooperation. Beijing itself berated the Malaysian government over Kuala Lumpur’s perceived stalling, with China’s Foreign Ministry spokesman Qin Gang stressing on March 10 that Malaysian authorities should “step up their efforts and speed up their investigation.”

The Malaysian government has defended itself, with Defense Minister Hussein telling reporters on Wednesday that “it’s only confusion if you want it to be seen to be confusion.” But it is receiving growing domestic flak. “Malaysians have come to accept that their leaders don’t answer questions,” prominent lawyer Ambiga Sreenevasan told the New York Times yesterday. “When you are not seriously challenged in any meaningful way, of course you get complacent and comfortable.”

Pre-existing territorial disputes have added to the tension, with key parties in the search operation — including China, Vietnam, the Philippines and Malaysia — already embroiled in hotly contested claims over the South China Sea. Moreover, the fact that 154 of the 239 passengers were from either China or Taiwan presents an added urgency for Beijing. An editorial in the Chinese state-run Global Times said of Malaysia’s failure to issue regular and clear details: “Malaysia’s grave inconsistencies on this vital information cannot but be a devastating blow to the outside world’s confidence in its core role in search and rescue.”

For Vietnam, which has no nationals aboard the missing MH370, the question of cooperation with Malaysia appears a sensitive one. When TIME tried to approach a senior Vietnamese official involved in the search to ask about Malaysia’s sharing of information, an English-speaking member of staff stepped in and said, “It’s not a question we will answer.”

“I asked [Malaysian officials] for information about the flight path two days ago, and the information only arrived this morning,” he said today. “It’s all very slow, and I don’t know why. Six days without finding something is too long. It’s very strange.”

Data automatically downloaded from the engine of MH370 has led U.S. analysts to claim that the plane may have continued flying for four hours after the radar went blank. The Wall Street Journal, which first reported on the new finding on Thursday morning, said investigators were exploring the possibility that someone aboard diverted the plane, “with the intention of using it later for another purpose.”

Malaysia’s Hussein dismissed the claims at a press conference this afternoon, saying that the government, as well as Boeing and Rolls-Royce, which designed engines for the Boeing 777 aircraft, believed the Journal’s report was inaccurate. That response is likely to be contested by U.S. analysts, who believe the new findings warrant an expansion of the search operation beyond the South China Sea. The U.S. dispatched a naval vessel to the Indian Ocean under the assumption the plane crashed somewhere there.

In the brain room of the Vietnamese operation, analysts huddle over a laptop, updating on a map the shifting demarcation of the search area. Two enlarged maps hang on the wall behind them, one showing flight paths of various airlines over southwest Vietnam, another marking in white the blocks of sea that were explored today, and in green those that will be explored tomorrow. The pencil lines change regularly, but new information on the plane’s whereabouts is scant.

On the nearby runway sits a small seaplane readied for Friday’s search. Vietnam has sent craft from airports across its southern provinces, while China has assigned 10 satellites to survey the seas and deployed nine ships and four helicopters. “As long as there is a glimmer of hope,” said Chinese Premier Li Keqiang at a press conference on Thursday, “we will not stop searching for the plane.” 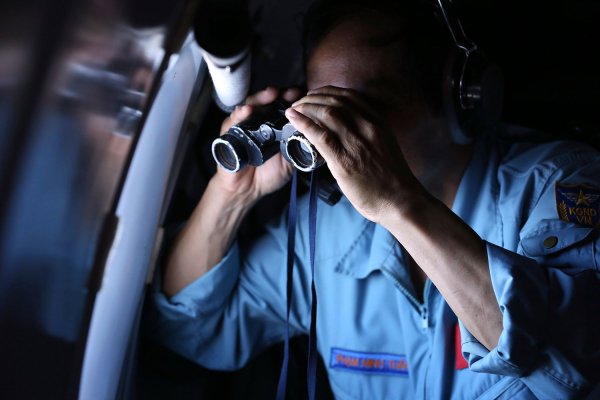