Whenever I read about this mythical place in which a person’s sexuality is no longer taboo, in the wake of a handful of states allowing marriage equality, I often think to check the balance of my credit card. I would love to be able to afford to go to such a wondrous place. Unfortunately, reality quickly smacks me upside the head. There’s no way I could ever enter such a utopia — given that the only people allowed admittance are white, upper middle class white gay men. (Oh, and maybe the occasional straight “ally.”)

Months ago, I read David Carr’s essay in which he asserted “now that gay marriage is a fact of life, a person’s sexual orientation is not only not news, it’s not very interesting.” I chalked that up to him being a straight, white guy who didn’t know any better. However, Brandon Ambrosino recently lent credence to Carr’s possibly misguided remarks by noting, “Carr’s is a welcome reminder of the progress we often forget we’ve made. A person’s gayness isn’t a talking point, and his alleged gayness ought never be since it takes us back to an era when it was culturally acceptable to shame a gay person as a curious oddity.”

For the record, it’s still culturally acceptable to shame a gay person as a curious oddity. Otherwise, any conversation about a public figure’s sexuality would reflect that on its own. What really bugs me about this conversation, and all those like it, though, is that marriage equality is often the sole basis on how to weigh progress.

Should I meet the R&B singer or NBA player of my dreams, I’d love to get married and have all of the legal protections that come with that institution in all of the 50 states. Nonetheless, when I think about actual progress, as a gay Black man I can’t be silly enough to base “how far we’ve come” on where I can get married. I can see same sex marriage being legalized nationwide — but at present moment, I have other things on my mind to worry about.

We can start with the one-sided representation of the LGBT community.

Although Black people have traditionally been portrayed as the boogiemen and boogiewomen of gay rights (disproportionately opposed to gay marriage, on the whole), a Gallup poll nonetheless found that “Blacks are more likely to identify themselves as lesbian, gay, bisexual, or transgender than any other racial or ethnic group in the nation.” A year before that, the Census Bureau highlighted that gay couples “in Southern states like Arkansas, Louisiana, Mississippi and Texas are more likely to be raising children than their counterparts on the West Coast, in New York and in New England.”

And yet, who are the faces of gay families in the media? I recall Stephen Marche’s review of the now cancelled NBC comedy, The New Normal, in which he claimed that, “Gay people are becoming too boring for television.” Well, maybe the ones we’re stuck with are.

And even when there is some diversity — e.g. the picture of two gay Black men raising children together that caused a stir recently — it comes from the Internet and is still framed with a disingenuous, “Ohmigod, why are you talking about their race as if that matters?” It’s always the people who aren’t subjected to scrutiny because of their color telling everyone else about the beauty of colorblindness.

The lack of effort to reach and represent other types of gay men has numerous consequences. For instance, take the New York Times report about Black and Latino men becoming the face of HIV. The story notes that “there has been little political pressure to focus on young gay blacks and Hispanics.” On the booming AIDS rates among minority gay men, Krishna Stone, a spokeswoman for Gay Men’s Health Crisis, lamented, “There wasn’t even an ad campaign aimed at young black men until last year — what’s that about?” Phill Wilson, president of the Black AIDS Institute in Los Angeles, added that there are “no models out there right now for reaching these men.”

But again, someone’s sexual orientation doesn’t matter anymore because a few guys in New York and San Francisco have gotten married, which means the gay dudes living in New Orleans, Houston, and Atlanta just need to shut up and smile. The struggle is over now. 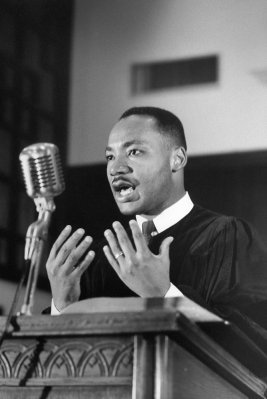 What the Gay Rights Movement Should Learn from Martin Luther King, Jr.
Next Up: Editor's Pick