Russian President Vladimir Putin speaks during a meeting on economic issues at the Bocharov Ruchei residence in Sochi on March 12, 2014.
Michael Klimentyev—AFP/Getty Images
By Rana Foroohar

With the tumult in Ukraine continuing, there’s been a lot of talk about the U.S.’s major lever in the fight against Vladimir Putin’s Russia: petropolitics. Usually, it’s emerging powers–Russia, Iran and Nigeria–that use the spoils of oil and gas to bolster their influence. Consider that Germany, the world’s fourth largest economy, depends on Russia for about 40% of its energy, and Western Europe as a whole gets a third from it. It’s not hard to see why Europe hasn’t been eager to go along with trade sanctions against Russia in the past (or now). No European leader wants to risk an energy shortfall or peak prices in the middle of a cold winter.

The question today is whether the U.S., which is becoming a major shale-oil and gas producer in its own right, can do anything to help Europe loosen the Russian energy noose. The Obama Administration believes it can and is pushing to accelerate the process of getting American liquefied natural gas (LNG) on line and ready for export. Transportable LNG is the fruit of the fracking boom. Pundits and politicians like House Speaker John Boehner are touting the idea that American energy could make a big difference in Europe, in the struggle with Russia and ultimately in many global conflicts. “The ability to turn the tables and put the Russian leader in check,” Boehner wrote in a Wall Street Journal op-ed, “lies right beneath our feet.”

That view is overly optimistic. J. Robinson West, founder of PFC Energy and a senior adviser at the Center for Strategic and International Studies, agrees. “People have the idea that it’s easy to use energy as a weapon, but it’s not,” he says. “It’s extremely complicated.” For starters, liquefied natural gas remains limited in scope. Although gas is relatively easy to transport via pipeline, you can’t ship it by sea if it’s not properly stabilized. The first LNG export hub to clear hurdles set by the U.S. Federal Energy Regulatory Commission is Cheniere Energy’s Sabine Pass project, on the border of Texas and Louisiana, but it won’t come on line until late 2015 at the very earliest. The next three ports on the waitlist haven’t even been greenlighted. When construction will begin is anybody’s guess.

America’s homegrown shale-oil and gas production is still minuscule. While the U.S. Energy Department is predicting that shale-oil production will climb to about 10 million barrels per day by 2017, right now it’s about 3 million. Given that the U.S. consumes about 37 million barrels per day of fossil fuel, it’s not as if the nation is about to become a major energy exporter overnight.

And when U.S. production reaches levels high enough for potential export, there will likely be a heated debate about whether it should go abroad. America’s budding manufacturing renaissance in recent years has been predicated on U.S. firms’ (particularly energy-intensive chemical and heavy-machinery manufacturers) having easier access to cheap shale oil and gas. Experts like Daniel Yergin, author of The Prize, a Pulitzer-winning history of the oil business, are eager to see infrastructure spending on new pipelines to take Western shale oil and gas to Rust Belt refineries, improving their profitability. The 2016 U.S. elections are on the horizon, and the state of the economic recovery, which remains weak, is still the top political issue. In that environment, it’s hard to see how sending a few million barrels per day of gas to Europe could compete with the larger goal of U.S. job creation and American competitiveness.

The U.S. can’t save Europe when it comes to energy. And it can’t impose truly effective sanctions without Europe’s cooperation. Thing is, it probably won’t have to. Putin’s petrostate will eventually implode all by itself.

Even before the Ukrainian crisis began, Russia was headed toward a major decline. Despite oil prices being more than $100 a barrel, its economy will be lucky to grow at a rate of 1% this year–about one-third of the U.S. rate. The fact that the American economy is growing faster than not only Russia’s but also Brazil’s and those of other emerging-market nations is truly amazing. A decade ago, the BRIC countries were supposed to be the world’s economic salvation. Since then, they’ve become complacent, and their growth has been cut in half. Some, like China, are brewing up epic debt crises. Others, like Russia and Turkey, are ruled by autocratic strongmen trying to grapple with tumbling markets and foreign-capital flight on a massive scale.

The world, in other words, has turned upside down economically. Russia’s pain will continue to be the U.S. markets’ gain, as investors seek safety in U.S. Treasury bills and blue-chip stocks. In economic terms, the war over Ukraine has already been won–and not by Putin. 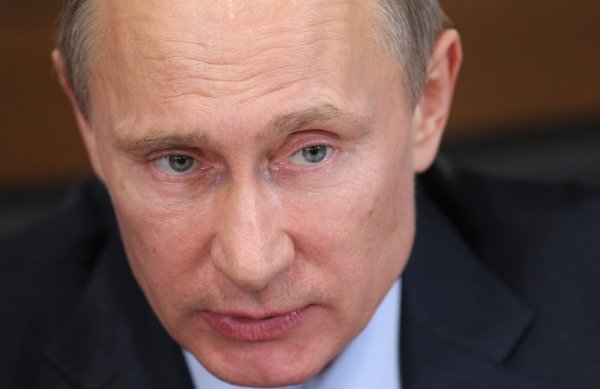 We Don't Owe Russia More 'Respect'
Next Up: Editor's Pick