It’s Time to Look Beyond Crimea

Flowers are placed on a Russian navy monument during a pro-Russia rally in the Crimean port city of Sevastopol March 8, 2014.
Baz Ratner—Reuters
By Ian Bremmer

The results of the Crimean referendum on March 16, which will give the peninsula’s inhabitants the option of voting to leave Ukraine and formally retreat into Moscow’s shadow, are a foregone conclusion. Ukraine’s new government cannot stop the referendum from taking place, because it will not be baited into a military confrontation with Russia that it can’t win. There is nothing Americans and Europeans can do about it because there is no popular support in the West for NATO troops riding to the rescue. And there is no way for the Ukrainian side to win the vote, because Crimea is the only Ukrainian province in which ethnic Russians form a majority.

The good news is that Crimea won’t matter for Ukraine’s larger struggle to forge a European future or for the West’s interest in seeing that Russia’s manipulation of Ukrainian politics will be for naught. The Obama Administration and Europe’s leaders need to realize that ultimately, Crimea is a sideshow. So are the proposed sanctions that Russia doesn’t care about. The real test for the West will be in bolstering the fragile Ukrainian government in Kiev, providing it with the financing it needs to avoid a crippling default on its debt and helping Ukraine as it strives to become more European.

Russian President Vladimir Putin is actually helping with this project. His primary goal is the creation of a Eurasian Union, a kind of reconstituted Soviet Union led from Moscow. So far, Russia has little to show for its efforts. A tariff-free zone that includes Kazakhstan and Belarus is hardly an answer to the E.U.

This is the importance of Ukraine: without it, there is no Eurasian Union. Ukraine was an industrial powerhouse in Soviet times and was the USSR’s agricultural heartland. Today it’s a country of 45 million people—­or 43 million, without Crimea. Its land area is larger than that of any current member of the E.U. Thus Moscow’s need to claw the country back whenever it appears set to deepen its relations with Europe.

The problem for Putin is that ethnic Ukrainians, who were already leaning in favor of stronger ties with Europe, make up more than 75% of Ukraine’s population. Images of Russians wearing ski masks and carrying automatic weapons through Crimean streets ensure that whatever ambivalence younger Ukrainians might have felt toward Russia has now evaporated.

Putin has also driven Europe to Kiev’s rescue. European leaders have responded to Ukraine’s plight with a promise that the trade deal it lost in November remains on offer. They have also pledged $15 billion in financial help for Ukraine’s fragile new government. If Russia had not invaded Crimea, the trade deal would have remained a more distant prospect, the check would have been smaller, it would have been slower to arrive in Kiev, and the money would have come with many more strings attached.

Against this backdrop, the West should be careful as calls rise for sanctions against Russia. Some sanctions will be necessary, if only for Western leaders to satisfy public demand at home for a get-tough response to Russian bullying. But substantive Western penalties on Russia will only make Putin more belligerent abroad and more popular at home. He isn’t afraid of sanctions. His worry is becoming the Russian leader who lost Ukraine—and since he’s in the process of doing exactly that on his own, the West is well advised to simply stay out of his way.

Make no mistake: Russia can and will continue to make life tough for Ukraine’s new government. But the battle for the country’s future won’t be settled with the Crimean referendum. The West needs to adopt a longer-term view. It needs to show patience with a Ukrainian government that will require carefully timed infusions of cash to ease the pain of reforms that will have to be put in place to fix the economy.

In the meantime, the world’s media will move to new stories. There will be other crises at home and abroad that demand the attention of America’s President and Europe’s heads of state. Yet the West must not lose focus on what matters most for Ukraine. Western leaders should spend their time, money and political capital buttressing Kiev, not punishing Moscow.

Bremmer is the president of Eurasia Group and the author of Every Nation for Itself: Winners and Losers in a G-Zero World 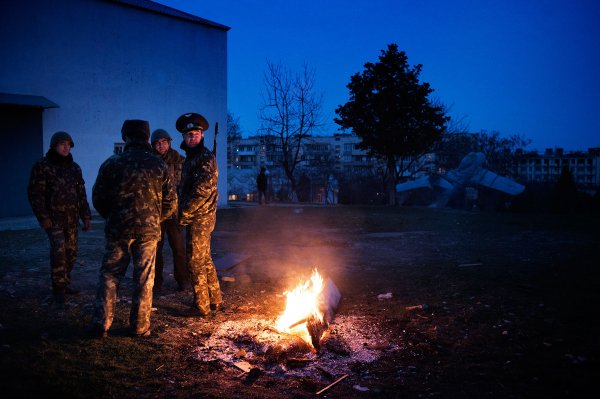 Why Putin Won't Hold Crimea
Next Up: Editor's Pick