A gas leak in New York City morphed into a deadly explosion Wednesday, claiming at least three lives and destroying two buildings while injuring dozens of other residents. How old the pipe was that runs beneath that part of an old neighborhood—and exactly how the leak started—remain unclear. Some academics, however, say it’s clear that much of America’s aging gas infrastructure needs to be replaced, regardless of what happened in Harlem.

American’s use of natural gas goes back to the early 1900s, and some of the pipes funneling gas beneath city streets today go back that long, too. More than 6,000 miles of pipe run through New York’s five boroughs, carrying the natural gas that in turn provides 65% of the heat used by city residents. And the average age of that pipe, according to a report from the Center for an Urban Future, is 56 years old, much of it made of old materials that are more prone to leaks.

“Most of those leaks are small,” says Rob Jackson, a professor at Duke University and Stanford who has been trawling Northeastern cities for natural gas leaks. “But at some point, every leak is 100% natural gas. So potentially, every leak is dangerous.”

In the Roaring Twenties, men laying pipe were likely to be making paths for cast iron or wrought iron—like the faulty 83-year-old pipe that led to an explosion in Allentown, Pa., three years ago that killed five. By the mid-century, those men were laying steel, and that eventually gave way to the more advanced plastic pipe used today. “The system has infrastructure that was in its time state-of-the-art,” says Frank O’Sullivan, a director of research and analysis at MIT. “But frankly, is no longer.” Cast iron pipes are more brittle, producing potential for cracking to occur. Early steel pipes, meanwhile, are more prone to corrosion. About half the pipeline in New York is cast iron or unprotected steel.

Earlier this year, the journal of Environmental Science and Technology released a study on gas leaks in Washington, D.C., led by Jackson. His team drove over every bit of asphalt in the city with tubes sucking in air outside the vehicle. They found nearly 6,000 leaks over 1,500 miles of road, including a dozen potentially explosive pockets gathered in manholes—most of which the city still hadn’t addressed six months after he reported them in February 2013. Pockets of natural gas generally need an enclosed space in which to build before they become explosive, which happens when the methane makes up about 5% of the air mixture. Jackson notes in the report that despite advances, incidents involving natural gas pipelines still lead to an average of 17 deaths and $133 million in property damage each year.

Though most enforcement happens at the state level, the Department of Transportation’s Pipeline and Hazardous Materials Safety Administration oversees the pipelines through which gas travels around the U.S. In 2011, following the Allentown explosion, Department officials issued a “call to action,” asking pipeline operators “to accelerate the repair, rehabilitation, and replacement of the highest-risk pipeline infrastructure,” such as aging cast and wrought iron pipe.

But that is a tall order with complicated economics. The enormous network of pipeline stretching across the U.S., O’Sullivan says, is so vast that at any given moment it contains enough gas for the entire U.S. population for three days. To get to American homes, natural gas must first be imported or taken out of the ground. The raw gas is gathered through pipelines, which take the raw material to processing centers where it is homogenized. It then flows through the equivalent of interstates toward so-called “city gates,” the points where the gas enters a local distribution system of smaller pipes—like the one run in New York City by Con Edison, which got a report of a gas leak before the explosion in Harlem.

It might seem like the answer is easy: companies like Con Edison should shell out and replace all the old pipeline. Those companies, though, are beholden to public utility commissions, who can determine how much the companies spend on such things, Jackson says, and public utility commissions often gauge success by providing customers with the smallest bills possible. “If the money were there,” he says, “the companies would do it very quickly,” and that may be where some more creative financing on the federal level could come in.

The notion of a natural gas system without any leaks is laughable to experts. And Jackson emphasizes that his research in cities like Washington, D.C. and Boston, is meant to help officials prioritize high-risk neighborhoods, which might be the older parts of the old towns in the Northeast. Though attempting to stop every leak isn’t helpful, he says, if companies address the real problem areas, it could mean saved lives and less greenhouse emissions in the atmosphere.

New York City politicians are already taking up the call. “With two reported deaths and over a dozen injuries, the human cost of inaction is clear,” City Councilman Ydanis Rodriguez said on Wednesday. “If the necessary funding for these repairs and improvements is not granted by the federal and state governments, tragic occurrences such as today’s may become more common in our city.” 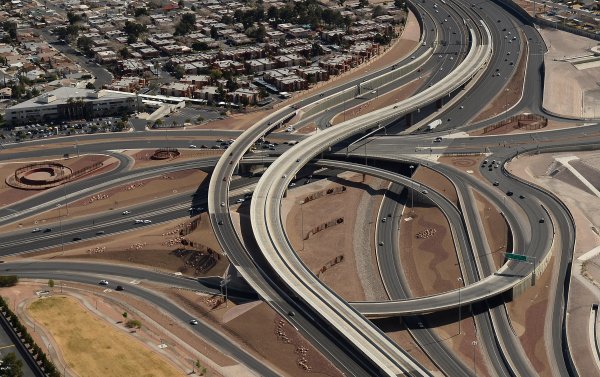 Obama Wants to Fix Your Highway
Next Up: Editor's Pick