New York’s Times Square is a kaleidoscope of bright lights and flashy ads, but one, posted Monday, will likely stand out due to its provocative nature.

The ad, which simply markets an over-the-counter oral spray called SnoreStop, depicts a U.S. soldier embracing a Muslim woman dressed in niqab. An ad for an anti-snore spray, it infers that the product keeps couples together by alleviating the annoying nocturnal sound that plagues millions. But when the company launched their #betogether campaign, they knew they would be courting controversy. They also knew that the billboard would command at least as much attention as the product, whose slogan is: “If we can keep this couple together, we can keep anyone together.”

But spokeswoman Melody Devemark said the response to the ads, which were first posted in Los Angeles in October, has varied and that in New York, the toughest market to place the billboard, there hasn’t been an outpouring of rage. “It’s still up there, she told TIME. “It hasn’t been burned down or anything.”

“If anything we are getting a lot of reaction on social media,” said Devemark, whose company, Camarillo, Calif.-based Green Pharmaceuticals, makes SnoreStop. “We wanted to start out in Times Square, but we couldn’t find a company that wanted to accept the creative. Our media buyer finally found a company and they were pretty much the only ones who would accept the creative.”

She explained that several other companies were approached with the ad, but never responded. One major company, Clear Channel Communications, flat out rejected the ad, citing “its ‘sensitive nature’ and ‘uncomfortable imagery,’ ” DNAInfo reported in November. But knowing that the ad would be controversial, the company pushed ahead with the campaign, which has so far resulted in product sales over the web tripling .

The company has not yet gauged what New Yorkers think of the ad, but national response gives an idea of what it might be. On Twitter alone the ad has elicited a gamut of responses from supportive:

Other ads marketed by SnoreStop feature several multiracial and gay and lesbian couples. “We show many diverse couples in our advertising,” Devemark explained. “With this particular couple, we felt they would stand out more.”

The soldier depicted, Paul Evans, is an active duty soldier and the woman, Lexy Panterra, is of Iranian descent. The image taken was inspired by a real life bi-cultural couple. Evans defended his decision to be shot for the ad. “I’m aware of the controversy and, in fact, I am in the military to fight for this very right to express oneself in this country,” he said.

Darren Shuster, a publicist with Pop Culture PR, which has been boosting the campaign, said the controversy may well overshadow the actual product. “It was controversial in L.A. and that’s not where 9/11 happened,” he explained. “It’s hard to deny that in New York it would be more controversial. You would imagine that it would be.” 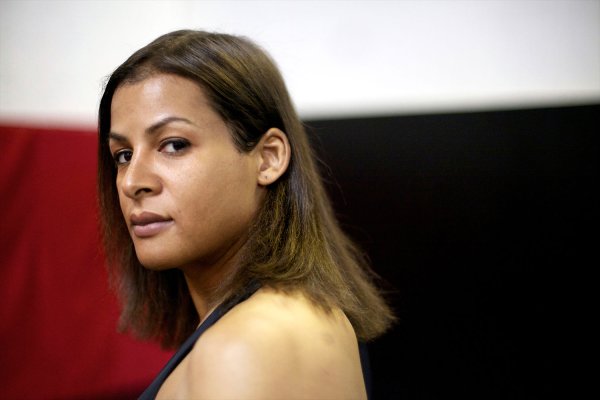 The Wrong Way To Write About Trans People
Next Up: Editor's Pick