It’s one of the Internet’s best-kept secrets: Vin Diesel has one of the best Facebook pages of all time. He regularly posts a bewildering mixture of selfies, movie promo shots and personal family photos — all of which garner millions of likes and thousands of comments — to his 63 million Facebook fans. Yes, you read that number right: Vin Diesel has the 15th most popular page on Facebook. That means he has more fans than Beyoncé, Justin Bieber, Family Guy, Taylor Swift and a host of other big names.

Earlier today he posted a stunning example of what makes his page so great. Here’s what we learned from the seven-minute video.

1) Some people still use iMovie. Diesel’s a big fan of cuts, even though this video is ostensibly meant to seem off the cuff. Make sure you watch until the very end or you’ll miss the his text message of “All is love…” floating across the screen.

2) He has a penchant for posting videos of himself performing female singer’s song. In the past he’s warbled a mean — and surprisingly heartfelt — karaoke rendition of Rihanna’s Stay.

3) Some people still buy DVDs. At least according to Vin Diesel. At the 3:24 mark, Diesel reveals that the whole reason for this delightful video is that Riddick — the third film in the Pitch Black series that holds a special place in Diesel’s heart for a number of reasons — is number one on the DVD charts. Apparently these charts are still a thing. Who knew?

4) He’s really, really into Juicy J’s verse on Katy Perry’s Dark Horse. He rewinds that section at least five times so he can headbang, dance with his fingers in the air and stare pensively out the window while muttering along to the music

5) His teeth are very straight and shiny.

6) What the serfbort dance move looks like. Click forward to 4:51 to watch him dance his heart out to Drunk in Love. If you’re curious, know that the proper version of this dance involves claps, snaps, spins, lots of shouting “oh oh oh!” and an attempt to “grain it on that wood.” Beyoncé would be proud. 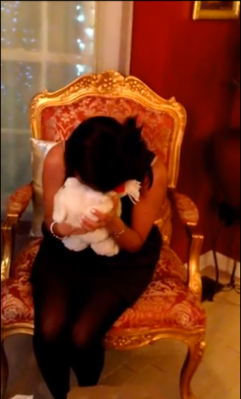 WATCH: Man Repairs Fiancée's Childhood Teddy Bear and Her Reaction Is Priceless
Next Up: Editor's Pick