How To Have A Happy Family – 7 Tips Backed By Research

1) Having Dinner Together Matters

Kids who have dinner with their families do better across pretty much every conceivable metric.

A recent wave of research shows that children who eat dinner with their families are less likely to drink, smoke, do drugs, get pregnant, commit suicide, and develop eating disorders. Additional research found that children who enjoy family meals have larger vocabularies, better manners, healthier diets, and higher self-esteem. The most comprehensive survey done on this topic, a University of Michigan report that examined how American children spent their time between 1981 and 1997, discovered that the amount of time children spent eating meals at home was the single biggest predictor of better academic achievement and fewer behavioral problems. Mealtime was more influential than time spent in school, studying, attending religious services, or playing sports.

Many of the benefits of family mealtime can be enjoyed without sitting down together every night. Even the folks at Columbia University’s center on addiction, the ones responsible for a lot of the research on family dinner, say having joint meals as infrequently as once a week makes a difference.

Children who know the stories of those who came before them have higher self-esteem and a sense of control over their lives.

Marshall and Robyn asked those questions of four dozen families in the summer of 2001, and also taped several of their dinner table conversations. They then compared the children’s results to a battery of psychological tests and reached some overwhelming conclusions. The more children knew about their family’s history, the stronger their sense of control over their lives, the higher their self-esteem, and the more successfully they believed their families functioned.

I’ve posted many times about the power of story. Having a family narrative is great for children.

“The most healthful narrative,” Marshall continued, “…It’s called the oscillating family narrative. ‘Dear, let me tell you, we’ve had ups and downs in our family. We built a family business. Your grandfather was a pillar of the community. Your mother was on the board of the hospital. But we also had setbacks. You had an uncle who was once arrested. We had a house burn down. Your father lost a job. But no matter what happened, we always stuck together as a family.’ ”

Marshall says that children who have the most balance and self-confidence in their lives do so because of what he and Robyn call a strong “intergenerational self.” They know they belong to something bigger than themselves.

Not easy, I know, but it’s what kids want from their parents more than anything else.

In a survey of a thousand families, Ellen Galinsky, the head of the Families and Work Institute and the author of Mind in the Making, asked children, “If you were granted one wish about your parents, what would it be?” Most parents predicted their kids would say spending more time with them. They were wrong. The kids’ number one wish was that their parents were less tired and less stressed.

Here’s how to reduce stress.

4) Be Part Of A Larger Community

Tons of research shows religious families are happier. Why is that?

The most comprehensive study ever done on this topic, in 2010, gives some clues about why this might be. After examining studies of more than three thousand adults, Chaeyoon Lin and Robert Putnam found that what religion you practice or however close you feel to God makes no difference in your overall life satisfaction. What matters is the number of friends you have in your religious community. Ten is the magic number; if you have that many, you’ll be happier. Religious people, in other words, are happier because they feel connected to a community of like-minded people.

I’ve posted before about the amazing power of a simple checklist, as described in Atul Gawande’s The Checklist Manifesto: How to Get Things Right.

I was interested in applying his technique to the problems families face when leaving home for a trip. He gave me a number of recommendations.

1. Create different lists for different times in the process. “Checklists have to be linked in time and space,” Pronovost said. “So I have a checklist for ICU admissions, and another for blood transfusions. You should have a checklist for one week before the trip. Then two days before you’ll likely need another. Then one more for when you’re walking out the door. But you always need time to recover, so if you have one for when you’re at the airport, it’s too late.”

2. Make it specific. “A checklist should take less than a minute to complete,” he said. “Each item should be a very specific behavior. Avoid vague language.”

3. Killer items only. “Target your checklist on things that commonly go wrong,” he told me. “If you put down things you don’t fail at, you’ll drive people crazy. This has been borne out in aviation, where accidents have been caused by checklist fatigue.”

4. The rule of seven. “I have a rule that checklists can be only seven items,” Pronovost said. “It’s the same reason our telephone numbers are seven digits. Otherwise, people will take shortcuts and items will get missed.”

5. Include the kids. “I would sit down with them and say, ‘Hey, girls, I’m trying to improve how we travel, so I made a checklist. Does this make sense to you? What else can you add?’ ”

Down with parental dictatorship! Kids do better when they make plans themselves or at least have a say.

You should even allow them to pick their own punishments. It creates greater motivation to obey the rules.

Scientists at the University of California and elsewhere found that kids who plan their own time, set weekly goals, and evaluate their own work build up their prefrontal cortex and other parts of the brain that help them exert greater cognitive control over their lives. These so-called executive skills aid children with self-discipline, avoiding distractions, and weighing the pros and cons of their choices.

Scores of studies show the incredible benefits that grandmom brings, like teaching kids to cooperate and to be compassionate.

Children who spend time with their grandparents are more social, do better in school and show more concern for others.

Countless studies have shown the extraordinary benefits grandmothers have on contemporary families. A meta-analysis of sixty-six studies completed in 1992 found that mothers who have more support from grandmothers have less stress and more well-adjusted children…

So what are these grandmothers actually doing? They’re teaching children core social skills like how to cooperate, how to be compassionate, how to be considerate. Researchers at Brigham Young University in Utah interviewed 408 adolescents about their relationship with their grandparents. When grandparents are involved, the study found, the children are more social, more involved in school, and more likely to show concern for others.

I hope this post helps your family be happier.

Parent myths: How much of what your parents told you was crap?

Most Popular on TIME
1
Can You Socialize Safely Indoors This Winter Amid COVID?
2
The Disastrous Swedish Approach to Fighting COVID-19
3
Why Spicy Food Makes Your Nose Run—and Why It's Great for You 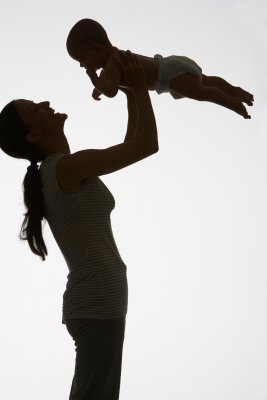 The 3 Comments Adoptive Parents Hate To Hear
Next Up: Editor's Pick