Apple’s iOS 7.1 update is easily the most significant overhaul of iOS 7 yet, where iOS 7 was Apple’s biggest rethink of its mobile operating system since it debuted with the very first iPhone back in summer 2007.

It’s a little surreal to think it’s only been six years since the word smartphone was pretty much synonymous with Blackberry. In that time, iOS shifted from four icon rows to five, from single-tasking to multitasking, from Google Maps to Apple Maps (and back to Google Maps, if unofficially), from primitive voice control — you could ask for the time of day — to the semantic breadth of Siri, and from no App Store to a flourishing ecology of just about any sort of app you can think of.

But iOS 7, which debuted late last summer, was mostly a visual reboot, and that’s the trickiest sort of overhaul to sell to consumers. Jony Ives’ so-called “flat” design approach was a miss for many, with some claiming the rainbow colors made the iPhone and iPad look clownish and too much like a toy.

iOS 7.1 does nothing to change the look of iOS 7 — this is Apple-knows-best, after all, and when it comes to iOS 7’s look and feel, Cupertino’s in for a penny, in for a pound. But it does include a barrage of tweaks and bug fixes and interface improvements that makes upgrading now all but essential.

You know those rectangle buttons that ran the width of the screen? They’re gone in iOS 7.1. If you want to make a call or hang up, you’ll now find fingertip-sized green or red buttons instead of bars. It’s a subtle change, but along with all the others — more detailed Weather app icons, a color-tweaked dial pad, slicker looking slide-to-unlock bars, cross-device FaceTime notification clearing, more conspicuous music player buttons, a new by-month event view in Calendar — it makes iOS 7.1 feel more refined and design-consistent.

Siri is a trifle friendlier.

I rarely use Siri, because when I most want to, say when I’m driving, it too often gets confused by ambient sounds and listens on after I’ve asked my question (that, or it stops listening too soon). In either instance, it louses up my request. I’ve been hoping for an option to manually control how long Siri listens since the feature debuted.

With iOS 7.1, you can: Siri now listens for as long as you hold down the Home button, giving you total control of the voice actuation process. “Total control” of something in an Apple product? Madness, I know.

You have an iPhone 5s and want to take great-looking pictures on sunny days.

Apple has to throw its flagship phone a bone; in this case that bone involves the option to set HDR, or High Dynamic Range, to automatic. If you’re not familiar with HDR, think of it as a sophisticated form of contrast designed to better express the light range of a given scene (especially, say, on a bright sunny day). In short, with HDR enabled, Apple takes three shots of a scene at different exposures, then folds those shots into one to produce something that in theory looks superior to any one.

HDR has been available in iOS for a while, but you have to manually enable or disable it, and while iOS kindly stores both HDR and non-HDR versions of a photo for your perusal, if you didn’t want HDR enabled for a shot and you left it on, it’s a minor pain to have to go back and delete all those superfluous snaps.

With iOS 7.1, if you have an iPhone 5s, you can set HDR to auto, turning control over to the iPhone’s sensor, which should enable or disable the feature intelligently based on your surroundings.

I don’t have an iPhone 4, and that’s where people are supposed to see the biggest speed improvements, but on my original iPhone 5, applications load noticeably faster, from tap to finish. I suspect this has as much to do Apple speeding up iOS 7’s animations as under-the-hood tweaks.

Apple’s been quashing fires since iOS 7 launched, some of them fairly serious, others less so. According to Apple, iOS 7.1 includes improvements to Touch ID fingerprint recognition and a fix for “an occasional Home screen crash bug.”

As for stability improvements, I didn’t have the random crashes you’ve maybe seen a handful complain about, so I can’t claim “more stable” as an iOS 7.1 sell point. If your iPhone crashed a lot after updating to iOS 7, it’s possible Apple’s managed to further stabilize things, but I suspect this has more to do with the particular apps you run (versus someone else’s lineup), thus your mileage, as usual, is going to vary.

Update: My colleague Harry McCracken notes that he, too, experienced crashes running iOS 7, but that they occurred on 64-bit iOS devices, like the iPhone 5s and newer iPads (he says his iPhone 5, like mine, has been relatively stable). So the theory, and it’s just a theory, is that people running 64-bit iOS devices are going to benefit more from the iOS 7.1 update’s stability improvements.

And two reasons — one model-specific, one general — not to update to 7.1 now:

Touch ID, Apple’s fingerprint recognition tool exclusive to the iPhone 5s, is one of those things that either works for people or doesn’t. Some folks are saying the iOS 7.1 update improves Touch ID’s recognition significantly, while others — in particular some folks on Apple’s official support forums — claim the opposite: that it stops Touch ID from working entirely.

If Touch ID works for you now, before the update, and you depend on it, you might want to wait on the 7.1 update until we know more about the veracity (and commonness) of those support board claims.

You want to buy a car that supports CarPlay.

CarPlay is Apple’s way of getting iOS into your car’s dash without licensing iOS directly to auto manufacturers (or selling an Apple-branded iCar). It transplants the relevant aspects of your iPhone’s interface to a touchscreen in your car’s dash, allowing you to interact with your iPhone without handling the phone itself: plug in and you’re in business, able to get directions, initiate calls, listen to music or send and receive messages. Better yet, CarPlay supports third-party music playback apps, including Spotify, Beats Music and iHeartRadio (Apple promises more are coming soon).

Apple’s being careful to restrict how you interface with each feature, of course, so you can use the touchscreen or physicals controls (say on the steering column) to initiate a call or peruse music, but you’ll have to use Siri if you want to send (and in this case, dictate) a message to someone.

The catch: CarPlay will only be in Ferrari, Honda, Hyundai, Mercedes Benz and Volvo vehicles in 2014 (with more brands to follow at unspecified dates). I assume that means late 2014 at the earliest, since this year’s new models won’t be out until mid-summer. Call CarPlay a “reason to update in three or four months,” then. 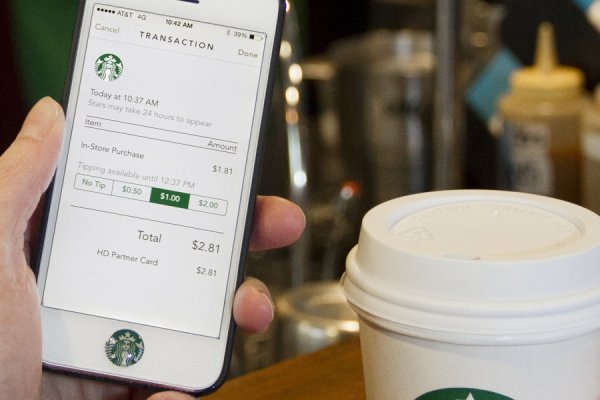 Starbucks Thinks You'll Tip Baristas From Your iPhone
Next Up: Editor's Pick