If you tuned into the 2014 Grammy Awards, you saw Daft Punk and Lorde take most of the big awards. Macklemore & Ryan Lewis, who many suspected would sweep, ended up winning only Best New Artist, as neither Lorde nor the robots were nominated in that category. But don’t feel bad for Macklemore a.k.a. Ben Haggerty, because he feels bad enough already.

During the non-televised portion of the evening — where the rap awards are mysteriously still marginalized despite the genre’s popularity— Macklemore & Ryan Lewis managed to sweep the Grammy’s rap categories, including taking the big prize of Best Rap Album for The Heist.

Their album, which produced chart topping singles like “Thrift Shop,” “White Walls” and equality anthem “Same Love,” managed to best excellent albums by Kanye West, Jay Z, Drake and Kendrick Lamar’s incredible Good Kid, m.A.A.d. City, which also contended for Album Of The Year. As it happens, Lamar did not win a single award last night, also losing Best New Artist to Macklemore. And that, according to Macklemore was a crime.

“You got robbed. I wanted you to win. You should have,” Macklemore wrote in a text message that he sent to Lamar, screencapped and then posted to his Instagram account.

“It’s weird and sucks that I robbed you. I was gonna say that during the speech. Then the music started playing during my speech, and I froze,” he continued. “Anyway, you know what it is. Congrats on this year and your music. Appreciate you as an artist and as a friend. Much love.”

In the caption to the Instagram post, Macklemore added more context: “My text to Kendrick after the show. He deserved best rap album. I’m honored and completely blown away to win anything much less 4 Grammys. But in that category, he should have won IMO, And that’s taking nothing away from The Heist. Just giving GKMC it’s proper respect.”

MORE: Watch Beyonce and Jay Z Get Too Filthy For the Grammys 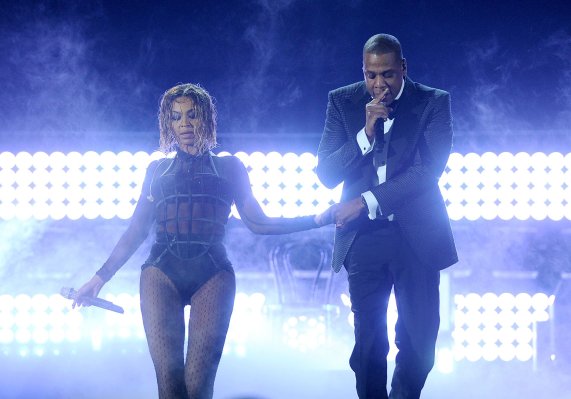 Watch Beyonce and Jay Z Get Too Filthy For the Grammys
Next Up: Editor's Pick