Introducing Twitch and Other Fascinating News on the Web

Whenever he’s given total control over any of the screens in our house, my son will immediately head for YouTube where he watches recordings of someone else playing Minecraft. It seems weird to me, but it turns out he’s on the cutting edge. Watching other people play video games is a big thing. Consider a site called Twitch, where 45 million people watch 13 billion minutes of gaming a month.

Dianne Feinstein, head of the Senate Intelligence Committee, accused the CIA “of violating federal law and undermining the constitutional principle of congressional oversight as she detailed publicly for the first time how the agency secretly removed documents from computers used by her panel to investigate a controversial interrogation program.” U.S. government agencies are now spying on each other. You and Angela Merkel must be getting boring.

+ Edward Snowden quickly accused Feinstein of hypocrisy and described this as another situation “where an elected official does not care at all that the rights of millions of ordinary citizens are violated by our spies, but suddenly it’s a scandal when a politician finds out the same thing happens to them.”

Here’s the former managing director of the National Transportation Safety Board on the latest evidence that suggests the missing Malaysia Air plane was travelling in the opposite direction of its initial destination. “This kind of deviation in course is simply inexplicable.”

+ This is an era when all of our data is backed up to the cloud. So why do airlines keep black box data trapped on planes?

+ The passengers traveling with stolen passports don’t seem to have any links to terror groups.

+ And from The Economist, here’s the obligatory chart showing youhow safe airplanes are when compared to other forms of travel. (Feel better?)

“The lead attorney was an oil and gas attorney who have never tried a case — criminal or civil — to a jury. The second attorney, two years out of law school, was working at an insurance defense firm on slip-and-fall cases. Both attorneys were selected from an alphabetical listing of lawyers at the local bar association.” That helps explain why the trial of Glenn Ford was so wildly flawed. On Wednesday, he could walk free.He’s spent the last 30 years on death row.

+ “Our research found that black boys can be seen as responsible for their actions at an age when white boys still benefit from the assumption that children are essentially innocent.” A new study onhow we perceive kids from different races.

“If I ran a third time, it would be like doing a third Hangover movie. Didn’t really work out that well, did it?” President Obama really wants young people to know about their health insurance options. So he didan interview with Zach Galifianakis on Between Two Ferns. Key question: “What should we do about North Ikea?”

+ The interview drove a whole lot of traffic to the health care site.

There are a lot of brain games that make a lot of promises. Do they really work? We’re not sure. According to the director of the neurocognitive disorders program at Duke, “Almost all the marketing claims made by all the companies go beyond the data. We need large national studies before you can conclude that it’s ready for prime time.” Either that, or we need to play enough brain games until we just know the answer.

+ In other news, a study on glucosamine found it did nothing for knee pain or deterioration, and another suggested that high protein programs could be damaging in the long run.

7. Talk to the Trunk

Scientists have found that elephants can differentiate between human languages, and know to move away from those speakers who are perceived to be a threat.

+ Going deep on the connections between humans and animals: Do Elephants Have Souls?

+ Do lobsters feel pain? It’s not clear. (But if you listen closely, you can hear melting butter scream.)

“People will continue — sometimes grudgingly — to make tradeoffs favoring convenience and perceived immediate gains over privacy; and privacy will be something only the upscale will enjoy.” From Pew Research: 15 Theses About the Digital Future.

+ Chartbeat’s Tony Haile explains that what you think you know about the web is wrong. (I’ve got a 175 browser tabs open, I’ve got to be right about something.)

So you and your significant other just had a big fight. What do you do? Well, of course, you take out your phones and use an app to work things out. Either that, or you could just play Flappy Bird until it blows over.

+ Some researchers watched parents and caregivers who were eating meals with kids. And the adults were on the phone, a lot.

+ Anonymity is the new publicity. A secret-sharing app called whisperjust raised $30 million. This is great news for my new app idea: Silence.

“But when Puddles the Clown sang his songs, something happened. He was no longer scary; he was no longer creepy; everything on the outside faded away. His voice was an equalizer.” Grantland’s Justin Heckert goes in search of Puddles, the saddest clown of all, whose voice — along with Lorde’s music — made him an Internet star.

+ The owners told the 911 dispatcher that the cat has a history of violence.

+ Twenty strangers were asked to kiss each other.

+ An honest trailer for Frozen.

+ Being the smartest person in the room is lonely. Tell your Twitter followers to start getting NextDraft. 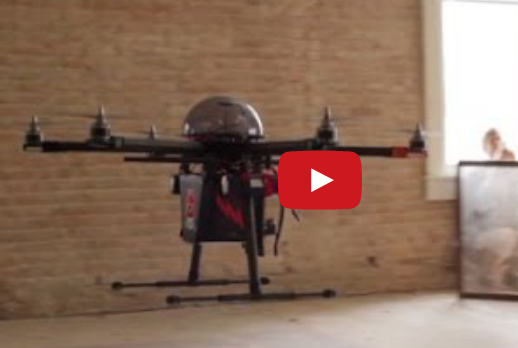 Watch This Drone Taser a Guy Until He Collapses
Next Up: Editor's Pick