Women are silhouetted as they watch a Malaysia Airlines jet taxi on the tarmac at the Kuala Lumpur International Airport, March 11, 2014, in Sepang, Malaysia.
Wong Maye-E—AP
By Sam Frizell

The reason why a Malaysia Airlines flight carrying 239 people disappeared on Saturday is still as mysterious as when the plane first lost radar contact. While fears of terrorism began to fade when it was revealed Tuesday that one of the infamous stolen passports was held by a 19-year-old Iranian asylum seeker with no terrorist ties, search teams now have even fewer explanations for what might have happened. When asked where the plane could be, air traffic controller Izhar Bahari at Malaysia’s Department of Civil Aviation told TIME, “We’ve made no progress, we don’t have a clue.”

In the absence of any definitive answer, conspiracy theorists have emerged with explanations of their own, however implausible. While there’s no credible evidence to support these theories, here are the ones getting the most attention:

1. Eerie cell phones rings could mean passengers’ phones are still on—or inhabited by ghosts. Relatives and friends of the plane’s passengers said they were able to find their loved ones on a Chinese instant messenger service called QQ, reports the Washington Post. Others tried calling the vanished passengers’ phones and heard ringtones even though the calls were not picked up. Many thought the phones might still be on, and more than 100 of them signed a petition to the Malaysian government to hurriedly investigate.

That led more suspicious observers to fire off rounds of irrational theories. Did the mysterious ringing indicate the passengers had been kidnapped and are still alive somewhere? Or was it the supernatural at work?

2. An otherworldly portal could have sucked up the flight.“If we never find the debris, it means some entirely new, mysterious and powerful force is at work on our planet which can pluck airplanes out of the sky without leaving behind even a shred of evidence,” said one blogger. Was it an alien abduction? others ask.

3. The flight’s disappearance was predetermined and perhaps written into the very fabric of the universe. Reddit is rife with commenters fixated on the numerical coincidences of the flight’s disappearance. “Interesting numerology,” said one Reddit user, RedditB. “Flight 370 disappears on 3/7 while reportedly traveling 3,700 km. Flight 370 flew at an altitude of 37,000 feet when it was last reported using flight tracking software. Luigi Maraldi, age 37, was one of the individuals whose passport was stolen. Malaysia Airlines is one of Asia’s largest, flying nearly 37,000 passengers daily. As of today, we are beginning the 37th month since the Fukushima tragedy, which is located on the 37th degree and initially caused 37 injuries at the plant.”

4. The North Koreans hijacked the jet. Others have argued the jet was hijacked by North Koreans and flown to Pyongyang. One Reddit user, Nickryane, claims the plane had enough fuel to fly to North Korea and remain within cell phone range. The dictatorship hijacked a jet in 1969, so Kim Jong-un would be pulling an old card out of the deck.

5. The Illuminati did it. One guess points to the supposed vortex energy points on the earth’s surface that Illuminati “and/or ancient aliens” who can control the energy grid. Commenters and bloggers emerged to point to occultists and nefarious shadowy figures who helped down the plane.

While the absence of a distress signal has helped such conspiracy theories abound, it does not rule out the very real possibility that the jet exploded at a high altitude and disintegrated. It’s a terrifying prospect because it would mean no trace of the jet will be found, and that the search for the plane is in vain.

“The fact that there was no distress signal is very disturbing,” Ross Aimer, an aviation consultant, told Al-Jazeera. “It’s almost unprecedented.” 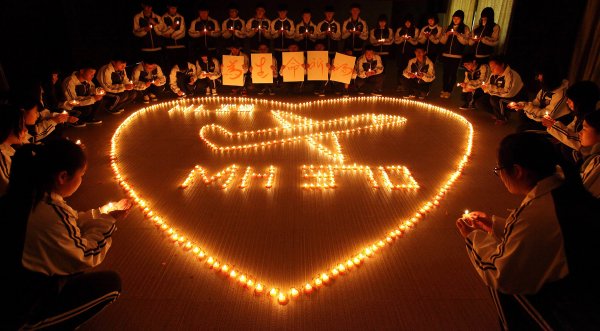 Lost Jet Veered Off Course
Next Up: Editor's Pick