Bachelor Juan Pablo: Every Awful Boyfriend You Ever Dated

Someone almost got punched in the face at my Bachelor finale watch party last night. Unsurprisingly, it was the only man in attendance, who made it his mission to defend Juan Pablo’s bad action after bad action.

It’s no secret that Juan Pablo secured the title as most reviled Bachelor in Bachelor history — even host Chris Harrison quipped, “not gonna lie, I’m okay moving on.” But it wasn’t just frustration at JP’s b.s. (and the eight bottles of wine the 10 of us consumed) that caused our group’s disproportionate outrage. In fact, what made watching Juan Pablo a cringeworthy experience — and made defending him so indefensible — was the fact that the Latin lothario was actually an amalgamation of all the worst men we ever dated. A putrid collage of character flaws, if you will.

While the list is too long, even for the internet, to catalogue, here are just a few reasons why Juan Pablo is really all of your awful ex-boyfriends wrapped into one condescending package. From least to most egregious:

He was really attractive
No, a man can’t be faulted for his abs. But didn’t it suck when you didn’t realize how awful your ex was for three weeks because you were too busy making out?

His favorite hobby was sitting at home watching TV all day
He didn’t even care if you’re there or not. When Nikki asked Juan Pablo what they’d be doing when the fantasy of the Bachelor was over, JP swept her off her feet with the following scenario: “I have a bed, a TV, we can watch whatever — movies, sports… I’ll be doing that by myself, probably.”

He’s a name-dropper
When Juan Pablo isn’t vegetating in front of the television, he hangs out with famous people, he told Andi on their overnight date. Just like you didn’t care about which celebrity lived next door to you ex’s parents’ Hamptons House, Andi didn’t care that JP sometimes chills with Miami Heat players.

He was rude to your best friend
And by best friend, I mean Chris Harrison. Whose blood didn’t boil when Juan Pablo started getting out of line with the host during After the Final Rose? (Although at least it showed that JP isn’t just condescending towards women).

On that note, your friends all hated him
In this case, by friends, I mean America. It’s exhausting trying to defend your boyfriend to the world. Just look how happy Nikki looked doing it…

(Side note: a boyfriend isolating you from friends is a serious warning sign for an unhealthy relationship.)

Even his parents thought he kind of sucked
Remember that boyfriend whose mom was really glad that you were dating him. But also kind of surprised since he was pretty much a jerk? Yeah, that’s Juan Pablo. JP’s family basically threw a red flag up in front of Clare and Nikki to wave them off of dating the single father. His mom bonded with Clare over how JP has made them both cry for God’s sake. But sometimes we have selective vision. You might think a mom has too little faith in her son’s complexities only to find out that you had too little faith in his ability to be a sociopath.

He’s offended that you’re offended by his offensive jokes
Let’s even ignore the whole homophobia episode, for a minute. In early March, Juan Pablo retweeted a joke that used the “r” word — “Not every flower can save love, but a rose can. Not every plant survives thirst, but a cactus can. Not every retard can read, but look at you go, little buddy!” — along with the message “JAJAJAJAJA LOVED IT…” When followers noted that they were offended, Juan Pablo accused them of being the insensitive ones. He tweeted, “People, try to be HAPPY and enjoy JOKES and SARCASM…” and “In Venezuela the R word is USED commonly and by NO means is to OFFEND anyone… #Relax #DifferentCulture #Respect”

Pretty sure that the “R” word was being used in the offensive way in that joke… but whatever you say, JP

His eyes would go blank whenever you said anything of substance
Sometimes followed by the conversation-propelling “I love it.” Huh?

He said things like “It’s OK” and “It’s fine” at the WORST possible moments
When someone brushes off a serious issue with something like “it’s not a big deal,” it becomes a big deal. Juan Pablo isn’t an 18-year-old who lacks social graces. At 32, he should know how to console a woman.

He couldn’t stand being in the wrong
When Clare tried to explain that she wanted an emotional as well as physical relationship, Juan Pablo immediately took the defensive by stating it was her fault he wanted to hook up with her because she at one point made and broke a no-kissing rule, “so don’t blame it on me.” (She wasn’t… she was just trying to have a conversation.) Juan Pablo is a victim of the “but I’m a good guy” complex.

You two didn’t speak the same language
No, I’m not talking about English. The language gap has been given far too much credence as an excuse for awful actions. I’m talking about HUMAN COMPASSION.

He was incapable of saying “I’m Sorry”
Men, take note: Even if you think an action, in the words of Juan Pablo, “ees okay,” if it clearly hurt your girlfriend, just say sorry. Because, you are sorry she feels bad, right?

He also wouldn’t say “I love you”
Because who needs to put labels on feelings, right? Not trying to force love, but if you’ve been saying the “L” word for four months and he’s said jack squat… you two might just be in irreconcilably different places.

He clearly only cared about one thing
Clare divulged that as a way to woo her, “He chose to tell me something that no woman wants to hear. That he doesn’t know me, and some sexual thing, I don’t even want to repeat it. It was insulting, it was offensive, and it just made me feel awful.”

He gave you a false sense of security
When Clare confronted him about concerns with the relationship two days before Juan Pablo made his proposal, giving him ample opportunity to break up with her, the Bachelor cooed: “You’re special to me. I know if I end up with you, we’re going to have a baby in, like, a year and two months.”

After he gave you a false sense of security, he dumped you
And then gets mad if you try to call him out. There’s nothing more aggravating than second guessing your gut. 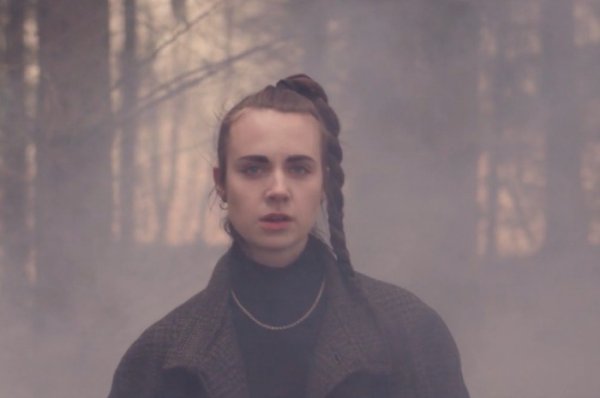 Video Premiere: MØ No Mythologies To Follow Album Teaser
Next Up: Editor's Pick