The perplexing case of Rachel Canning, an 18-year old New Jersey teen who is suing her estranged parents for private high school and college tuition and living expenses has achieved national attention. The case is a heartbreaking example of a family in which communication has collapsed and animosity has tragically replaced the warmth we should all expect from our families. It also seems, on the surface, to be a private matter. So why then has it gotten such national attention? The answer, I suspect, lies in the widespread aversion many older adults feel toward juveniles and how “entitled” youth appear to be, at least in the eyes of the old.

I suspect that this case and the attention it has garnered is another example of juvenoia. Juvenoia, a term usually credited to sociologist David Finkelhor, refers to the fear of juveniles by older adults. Juvenoia is manifest in a multitude of ways, including the belief that today’s youth are worse behaved than ever before, despite much evidence to the contrary. Many older adults continue to think that youth violence is the worst ever, for instance, despite the fact that it stands now at only about 12% of what it was just two decades before. But in the current case, many comments have focused on how “entitled” Rachel Canning is, implying that this is part of a greater trend in the current generation of youth.

Like many adults I’m not a big fan of the “everyone gets a trophy” movement over the past few decades. Honest feedback, discipline and structure are good for children, as is competition in the spirit of good sportsmanship. Giving them everything they want when they want it certainly isn’t. But the idea that youth today are any more entitled than in the past is, at best, debatable. Although some psychologists have claimed there is a “narcissism epidemic” among today’s youth, other psychologists have countered that the evidence for this is weak.

Indeed, comments by older adults that today’s youth are more entitled than previous generations go back at least to the ancient Greeks. My read of the data is closer to the skeptical view: most such claims are more indicative of the griping of older adults than anything “new” about today’s teens. Sure, some teens feel entitled, but that’s always been the case. But stories such as Rachel Canning’s lawsuit fit into those narratives and provide more fuel for juvenoia. What should be a private family matter becomes fodder for the perennial intergenerational squabbling.

Juvenoia also exerts itself in a variety of moral panics focused on youth. We constantly hear about how teens are up to new forms of mischief our older generations would never have thought of. Most of these tales end up being false. Recent examples include the “rainbow party” in which teen girls supposedly provided oral sex to multiple boys and the “knockout king” game in which young (usually minority) males supposedly target random people for assaults. Certainly in a country of over 300 million, some teens do dangerous and risky things (as do some adults), but evidence for any new mass trends in teen sex or violence is absent. These tales of wayward youth are the stuff of urban legend, not fact.

Juvenoia also manifests in the routine disparagement of youth culture. From Elvis Presley to rap music to video games, older adults are quick to blame youth culture for perceived social problems, often forgetting that the media valued in their own youth was similarly disparaged. I call this the “Goldilocks Effect” — every generation’s belief that the generation before was too rigid and conservative, and the generation after too wild and out-of-control. Each generation thinks it got culture “just right.”

Even science can get in on the juvenioa. Most recent have been the brain imaging findings that note our brains continue to develop through adolescence and into adulthood…and until we’re dead, really. Some research suggests that these differences are quite adaptive, but, nonetheless much of the narrative on this has been misused to portray teens as zombified hedonistic fools unable to restrain their least impulse.

Teens and young adults remain one group of people that can be publicly disparaged with almost no condemnation. Some of the anti-youth rhetoric gets wrapped up in language about “protecting” our youth. But a vein of true loathing runs through much of the discussion. And until we’re honest about that it will continue to produce urban legends and junk science. 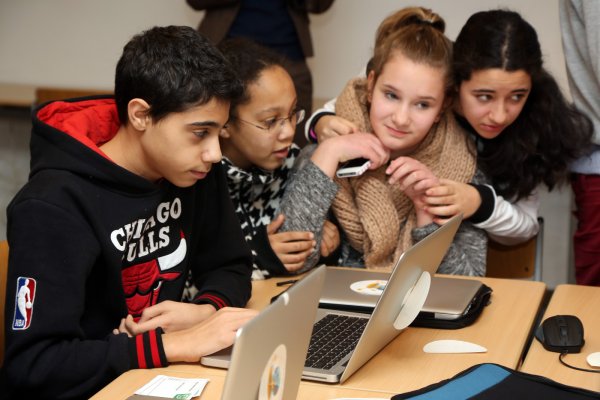 The Internet Is a Safer Place for Your Teen Than You Think
Next Up: Editor's Pick