RECAP: The Bachelor Watch: Juan Pablo Makes His Pick And It's Okay?

Welcome to the grand finale of The Bachelor, where Juan Pablo Galavis’s journey to love comes to its natural conclusion and he winds up with the person he loves most: Himself.

Juan Pablo’s journey has been mysterious to everyone apparently, because host Chris Harrison–whose eyes have clearly seen some things–introduces the finale with questions: Will Juan Pablo choose Nikki or Clare? If he does choose, will she say yes? Harrison then asks the question that everyone in America (even those who haven’t bothered to watch the show since they dared to have a British Bachelor) is asking: Was Juan Pablo actually on the show for the right reasons? The only way to find out is to watch.

Meet The Parents: Juan Pablo can’t wait to see how Clare fits into his family, which suits Clare because she “loves loves loves family.” That family, this family, any family. Even her sister Lara probably. Clare asks Juan Pablo’s mother if there is anything personality-wise that she should know about Juan Pablo. His mother’s response? Sometimes he’s very rude. Clare nods, he made me cry. Me too, says his mom. Ladies: If your beau makes his mom cry? RUN. Clare defends him, justifying his behavior by saying sure he made me cry, but I deserved it.

Most Telling Conversation: Juan Pablo tells his cousin that Clare wants to get married, man. She’s ready. She’s begging for it, adds the cousin. 100% yucky.

The Bachelor Milestone: Those three little words were said. Unfortunately it was Juan Pablo’s dad speaking to Clare, but close enough.

Meet The Parents, Part Two: Tomorrow is another day and another girl and that girl, Nikki, has a leg up because she already met the family at Camila’s dance recital.

Biggest Sign That Nikki Read A Book Of Reality TV Clichés On The Plane: Nikki swears being on The Bachelor has been a “life changing experience” and she is “so blessed” and that she “learned a lot about herself” and she’s just “so grateful for the experience.”

Worst Pandering: Nikki paints herself as the perfect stepmother to Camila to Juan Pablo’s mom. She explains how they would take the family to the beach and the pool and be a fun family. Juan Pablo’s mom says that he really likes to stay home and watch TV. Nikki pretends she’s down with that.

Biggest Red Flag: His mom is “pretty sure” that Juan Pablo’s ready for a relationship, adding that Juan Pablo is “not easy.” Similarly, Juan Pablo’s dad can’t quite commit to the idea of Juan Pablo as a good partner. The best he can manage is: “Nikki is enough honest to manage a good relationship with Juan.” This his cousin asks Nikki “how much fighting can [she] take?” Nikki explains that she equates fighting with passion. You’re not scared about that? Nope! Nikki says it’s not a red flag for her at all.

Best Audience Banter: “Way to show up,” said Chris Harrison to the dude who was probably promised a night in the Fantasy Suite with his wife to show up. The guys tentatively pumps their fist into the air and say, “Team Nikki!”

Best Foreshadowing/Worst Payoff: Before we cut to Clare’s final date with Juan Pablo, Chris Harrison gets in touch with his inner James Earl Jones and intones that this date is unlike anything we’ve seen on The Bachelor before. Cut to Clare in yellow short shorts standing next to a helicopter, which is exactly like everything we’ve seen on The Bachelor before.

Better Payoff: As the helicopter lands, no cameras, no microphones, Juan Pablo leaned over and whispered something to Clare. She reports that they weren’t sweet kind loving words, though. In fact, they were “shocking.” He chose to tell her something that “no woman wants to hear” some “sexual thing that she doesn’t want to repeat.” Whatever he said, it was “insulting, offensive and made her feel awful” and she is rethinking the entire relationship. Ees not okay, even if it does eliminate any doubt about what happened in the Fantasy Suite.

The Fight: Back at the hotel, Claire can’t believe that he said what he said. She didn’t come for a hook up, she came for love. Juan Pablo comes in and asks, “Can I have a besito?” about twelve more times and she ignores him. She sits him down and points out that what he said was rude. He responds that things that happen in private, stay in private. Apparently he doesn’t know that he’s on a reality show. Juan Pablo chalks it all up to just being honest. Then he points out that she broke her own self-imposed no-kissing rule in South Korea, so it’s clearly all her fault.

All’s Okay-ish That Ends Okay-ish: Out of the blue, Clare decides that she now knows there’s more than a physical connection between the two of them. Juan Pablo puts on the Josh Krajcik song that they danced to during their first date and she giggles that they should play that song when they get married. Then they retire to the bedroom to do whatever it was that Juan Pablo whispered in her ear.

Survey Says: Former contestant Sharleen found the whole thing hard to watch, because Clare’s “intuition was ringing” and she never answered the door. Bachelor Sean, with his Bachelor bride sitting by his side, also thought it was painful to watch and that Juan Pablo was running her in circles.

…Next: Now that that is over and Clare has been shot with a tranquilizer gun so she doesn’t freak out knowing Juan Pablo is spending the day with Nikki, it’s Nikki’s turn on the Juan Pablo Express. Nikki thinks Juan Pablo is afraid of getting hurt, which is just what women tell themselves to justify a man’s jerky behavior. He denies that he’s guarded.

Best Real Talk: When Nikki asks what life will be like when they are done with living in luxury hotels on tropical islands, Juan Pablo tells her: “I’ll have a bed, TV and my office. We can watch some movies.” What else will they have? The ankle bracelet he’s wearing.

The Last Date: Nikki tries not to stress about the fact that Juan Pablo hasn’t said those three little words (not the ones he said to Clare), but fails miserably. While Juan Pablo just wants to cuddle on the couch in her hotel room, Nikki is a bundle of nerves two dark thoughts away from curling up in the fetal position inside a jumbo-sized carton of Ben & Jerry’s. She presents him with a picture of them riding horses and then reads some journal entries and then they bid farewell at the door. As Juan Pablo leaves, she sits on the couch and cries. Cut to the audience sitting in stunned silence at the atrocities rained down upon these women for our entertainment. Good TV, right?

Before The Final Rose: Cut to Clare and Nikki with tears dried up in the St. Lucia sun. Clare claims that it’s her perfect version of a fairy tale and she now wants the fairy tale ending. What kind of janked up fairytales does she read?

Who Did He Choose: First off the boat? Clare. Chris Harrison points her towards Juan Pablo as she voice-overs that she knows her dad would be proud of her and her life choices and that Juan Pablo makes her feel safe. She tells Juan Pablo that she believes in him and knows that they have something special. We’ll let Bachelor Sean speak for all of us:

Worst Farewell: “I wished the earth sucked me today,” Juan Pablo says and Clare manages to not add, “Oh you suck enough by yourself.” But just because she doesn’t know he’s about to dump her. He says goodbye to Clare and the audience breaks into cheers.

Best Revenge: Clare lets him have it. “I though I knew what kind of man you were, but I would never want my children to have a father like you!” Amen, sister. During the After the Final Rose special, she doesn’t bother speaking to Juan Pablo, because she got her closure.

Worst Behavior: As Chris Harrison comforts Clare, Juan Pablo watches her walk away on Chris’ arm and blurts, “Phew, glad I didn’t pick her!” Line to pick up your pitchforks forms on the right, torches on the left.

Most Awkward Final Final Rose Ever: Nikki tells Juan Pablo that she loves him and he looks her in the face and says …he loves many things about her. He loves her honesty and can see her being a good stepmom for Camila. He has a ring in his pocket, but isn’t going to use it, because he’s not 100% sure he wants to propose, but is 100% sure he doesn’t want to let her go. He adds that he likes her a lot. A lot. And that’s enough for Nikki. He hands her the final rose and …meh. The live studio audience can’t even be bothered to boo.

Best After the Final Rose Ever: Juan Pablo seems absolutely bewildered by the fact that Chris Harrison wants to know about the state of his relationship. He has no idea at all why people keep asking him questions about his private life. Isn’t he just a regular citizen entitled to his right to privacy? He doesn’t have to tell anyone that he loves Nikki–not even Nikki, who spends the show trying to convince herself that it’s okay that Juan Pablo won’t tell her he loves her. Hopefully America’s pity will keep her warm at night. According to Juan Pablo, The Bachelor is just a show that helps people find love and then leaves them alone for eternity. Sean Lowe, who was recently married to his Bachelor bride during prime time, tries not to laugh while Catherine suggests that he not bite the hand that feeds him. Chris Harrison just sits in stunned silence and waits for the next Bachelorette. Speaking of which …

The Next Bachelorette Is: Andi! She’s an ADA who tackles gang cases, likes to shoot guns, and mentioned a trap house on national television. She also ditched Juan Pablo for being a jerk. Can’t wait to see what shenanigans she gets up to on her journey to find love. Only Dancing with the Stars stands in our way.

MORE: VIDEO: Here’s What Usually Happens in The Bachelor Finale 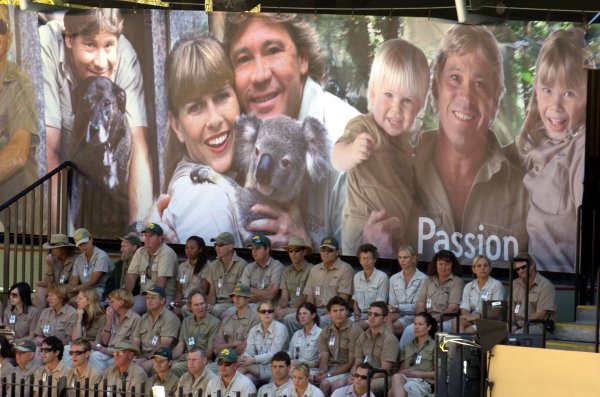