The 56th Annual Grammy Awards were filled with some of the best in the musical business and LL Cool J. The show, which has become less about the awards and more about the eclectic and outlandish performances, lived up to its new reputation, featuring performances by Jay-Z and Beyonce, Taylor Swift, Daft Punk, Lorde, Kendrick Lamar, Paul McCartney, Ringo Starr and more. We laughed, we cried, we tweeted.

Here were some of the highlights of the 2014 Grammy Awards:

Best Duet With A Chair: Beyoncé. The 2014 Grammys opened strong with a smoking, steamy, bleep-filled and mostly seated performance of “Drunk in Love” by Beyoncé and Jay Z, who managed to make an Ikea chair look like a peep show prop. This should definitely earn her an award next year.

Best Explainer: In case you weren’t sure how LL Cool J has managed to turn the Grammy hosting gig into a life-long sinecure like a Supreme Court seat, the announcer explained it with his introduction: Grammy winner LL Cool J. Then LL spent 10 minutes justifying his existence on stage and reminding the world that he was once a rapper.

Best Advice: While announcing the Best New Artist winner (it was Macklemore & Ryan Lewis), Anna Kendrick doled out the best advice of the evening: “Don’t Lose.”

Best Doctor Who Reference: [SKIP AHEAD NON-FANS] The only stage dressing for Lorde’s performance of “Royals” was a giant projection of a stone angel behind her, which lead to dozens of “Don’t Blink” Weeping Angel tweets.

Worst Stage Prop: Hunter Hayes had to perform his song under a giant John Lennon quote. With two Beatles in the front row.

Best Pop Duo/Head Gear: Daft Punk managed to edge out Rihanna, Justin Timberlake, Robin Thicke and P!nk for Best Pop Duo for their track “Get Lucky”, (they also won Best Electronica/Dance Album for Random Access Memories). However because they are French robots who do not speak in public, they brought out collaborators Nile Rogers and Pharrell to do the talking for them. While it was nice seeing Daft Punk win, Pharrell’s hat upstaged them all and inspired a slew of tweets:

Biggest Missed Opportunity: Robin Thicke joined Chicago on stage first for a few of Chicago’s greatest hits before the obligatory performance of 1/3 of “Blurred Lines.” Sadly, Chicago did not take the opportunity to twerk, which would have been horrifying GIF-bait yet far more entertaining than the actual performance. The overall effect was as if your parents picked the radio station and then left the room or as James Poniewozik put it:

Best Reminder That Nirvana Is Being Inducted Into the Rock And Roll Hall of Fame: Nothing like a Grammy for a rock song that few people remembered to listen to. Half of Nirvana (Dave Grohl, Krist Novoselic + Pat Smear) teamed up with 1/4 of the Beatles (Paul McCartney) for “Cut Me Some Slack,” and won the Grammy for Best Rock Song.

Best Headbanging: While Black Sabbath took home the Grammy for Best Metal Performance for “God Is Dead?” Taylor Swift provided the best headbanging of the night when she whipped her hair back and forth Willow Smith style as she accompanied herself on the piano for “All Too Well.” It’s just too bad that no one will make a GIF of it.

Most Gracious Acceptance Speech: When Ariana Grande and Miguel announced that Lorde won for Best Pop Solo Performance for “Royals”, she looked as shell-shocked as you would expect a 17-year old from New Zealand to look as she took home the Grammy. She skipped thanking her major label, PR team or parents and instead just thanked her category competition, thanking “Sara, Bruno, Katy and Justin” for inspiring her.

Country Surprise: Indie alt-country group The Civil Wars “From This Valley” managed to beat out Kelly Clarkson with Vince Gill, Kenny Rogers and Dolly Parton, and the country supergroup of Tim McGraw, Taylor Swift & Keith Urban and their track “Highway Don’t Care.” That said, it was a great performance.

Best Music Video: No real surprise that the David Fincher directed video for Justin Timberlake and Jay Z’s “Suit & Tie” took the win, but Jay Z must have been a bit miffed that his “Picasso Baby: A Performance Art Film” didn’t come out on top.

Winner Most Likely To Annoy: In a move sure to tick off rap Twitter for eternity, Macklemore & Ryan Lewis swept the rap categories. Not only did their chart-topping multi-platinum novelty rap song “Thrift Shop” beat out Eminem, A$AP Rocky, Jay Z, Kanye West, Drake and Kendrick Lamar for both Best Rap Song and Best Rap Performance but they also took home Best Rap Album giving new meaning to their album’s title, The Heist.

Worst British Accent: Jamie Foxx, who is halfway to an EGOT, thanked Ringo Starr for his performance of “Photograph” with a British accent so atrocious that it would give Madonna and Gwyneth Paltrow the church giggles.

Best Dad Award: When Jay Z accepted the Best Rap/Sung Collaboration award for “Holy Grail” (collaborator Justin Timberlake was too busy starring in every commercial that aired during the show, to show up), he told his daughter, Blue, “Look, Daddy got a gold sippy cup for you!”

Carter Family Grammy Race: Jay Z: 18, Beyoncé: 17. However, Beyoncé, the album, will be eligible next year to undoubtedly even the score.

Best Inspiration To Write Best Album Ever: Kendrick Lamar may have lost out to Macklemore and Ryan Lewis, but hopefully it will encourage him to go back in the studio and write the best follow-up album ever. Revenge is best served in the studio, right?

Biggest Surprise: Once your brain processed what was happening on stage, the Kendrick Lamar/Imagine Dragons performance was incredible. Lamar and Imagine Dragons – who combined their songs “m.A.A.d City” and this year’s Best Rock Performance winner “Radioactive,” respectively – made their unusual pairing work by infusing their performance with sheer energy and determination. The end result was unexpected and thus jaw-dropping. It even earned a half fist pump from Jay Z.

Worst Place To Sit: Behind Taylor Swift, who was up on her feet and dancing while the rest of the audience stayed in their seats.

Worst Time Slot: Kacey Musgraves is a serious talent, but after the blistering performance by Kendrick Lamar and Imagine Dragons, the Grammys should have cut to commercial or, if they must, their behind-the-scenes social media reporter. Instead they had Musgraves sing “Follow Your Arrow” in the shadow of a neon cactus. It felt like your drunk friend hitting shuffle on your iPod at a party and was a jarring disservice to a very skilled singer.

Best “Surprise” Beatles Reunion: As expected, Paul McCartney and Ringo Starr came together for a performance sure to get your mom extremely worked up.

Excellent Camera Cutaway: During their set, the camera cut to Yoko Ono dancing away happily in the audience.

(MORE: Yoko Ono On Her Rebirth As A Dance-Music Star)

Best Highwaymen Reunion: Any Highwaymen reunion is a welcome event. Jeremy Renner — in castoffs from his American Hustle wardrobe —introduced The Highwaymen, Kris Kristofferson and Willie Nelson with stand-ins Merle Haggard and Blake Shelton chuckling at his good luck.

Biggest Upset: Newcomer Kacey Musgraves took off the awesome light-up boots she wore during her performance to pick up a well-deserved award. The freshman beat out some stiff competition, including Taylor Swift, to win for her album Same Trailer Different Park.

Biggest Shut Out: Taylor Swift’s excellent album Red, didn’t home a single major award. As the album was released way back in 2012, perhaps Grammy voters forgot how good the album is.

Best Performance of the Night: To introduce Daft Punk, Nile Rogers, Pharell and Stevie Wonder (and Pharrell’s new hat) Neil Patrick Harris announced that “we’re all about to ‘Get Lucky'” and we did. “Get Lucky” was already one of the catchiest songs of 2013 and adding Stevie Wonder to the mix, of course, managed to make a great song even better. Plus getting to watch The Beatles, Jay and Bey, Steven Tyler, Katy Perry, Yoko and, of course, Taylor Swift dancing to the track served as a great reminder why this song was on every playlist last year.

Best Reminder That Carole King’s Tapestry Is Great: While Sara Bareilles is the one nominated this year, her performance with Carole King was a great way to remember to stream Tapestry on Spotify tomorrow.

Song of the Year Surprise: Lorde managed to do something that Kanye, Jay Z, Drake and Kendrick couldn’t do: Beat Macklemore. The teenager’s “Royals” took home Song of the Year (which is a songwriting award, not for performance) over “Same Love”. With that trophy, Ella Yelich-O’Connor became the youngest songwriter to win for Song of the Year. It’s also a good time to remember that Lorde wasn’t even nominated for Best New Artist this year.

Best Eulogy: While for some reason Jared Leto was officially tasked with eulogizing Lou Reed, the best memorial was seeing Kirk Hammet, the guitarist for Metallica, wearing a Lou Reed Transformer shirt during their performance of “One” with classical pianist Lang Lang

Biggest Smile (Implied): Daft Punk for their Record of the Year win for “Get Lucky”. The robot helmets are just to prevent them from blinding us with their grins, right?

Best Taking Us All To Church Moment: When Macklemore and Ryan Lewis and Mary Lambert and Trombone Shorty performed “Same Love,” Ben Haggerty got up on stage and preached about love, God and faith. He was joined by Queen Latifah to oversee the marriage of 33 couples (some same sex, some not) who took over the audience. Then Madonna came out to serenade the new couples with “Open Your Heart” backed by a choir. To close the performance, Mary Lambert and Madonna teamed up for the final chorus of “Same Love”. Consider the bar raised very very high, award shows of the future.

Best Acceptance Speech: “Back when I was drinking, I used to imagine things that weren’t there … then I got sober and two robots called me to make an album” Paul Williams, while accepting Daft Punk’s Album of the Year award for Random Access Memories.

Sweetest Shout Out: Daft Punk asked Paul Williams to tell Macklemore and Ryan Lewis that they loved the message of “Same Love.”

Best Show Closer: Since the show clocked in at almost four hours, whoever closed the show would have won the Audience Appreciation Award, Nine Inch Nails, Queens of the Stone Age, Dave Grohl and Fleetwood Mac’s Lindsay Buckingham were phenomenal. So phenomenal that you almost wanted the show to go longer. Almost. 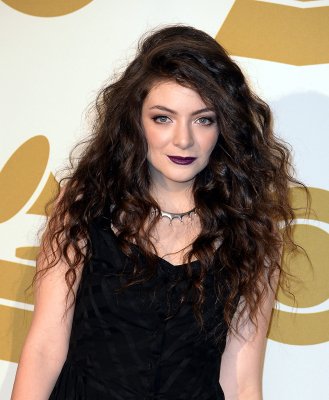 Twitter Couldn't Stop Talking About Lorde at The Grammy Awards
Next Up: Editor's Pick