Shocker alert: Lena Dunham has angered people on the internet.

The Girls creator hosted Saturday Night Live on March 8 — which happened to be International Women’s Day— and appeared in a skit called “Jewelry Party” (above). The skit, which also starred SNL cast members Cecily Strong and Mike O’Brien, featured a man accompanying his Venezuelan girlfriend to a jewelry party, where he was outed as a men’s rights activist in front of her feminist friends.

For the uninitiated, men’s rights activists (MRAs) belong to a somewhat amorphous grassroots movement in which men — and, surprisingly, a few women — advocate for, well, men’s rights on the grounds that anti-male discrimination is allegedly a widespread problem. While some MRAs focus on discrimination in child custody cases or female-on-male domestic violence, which are objectively worthy concerns, others push a more problematic agenda, such as arguing that sexual assault numbers are inflated. Not helping their cause, of course, is that fact that many MRAs also tend to rely on spewing sexist and misogynist vitriol as their modus operandi.

When real-life MRAs saw Dunham’s SNL skit portraying one of their own as a scrawny virgin with a mail-order girlfriend and a vendetta against Planned Parenthood, they were offended. Several Reddit discussions quickly popped up, where MRAs complained that the sketch was not only an inaccurate portrayal of their movement, but that it was also offensive and not funny.

In all honestly, it certainly wasn’t the funniest sketch SNL has done before. (There’s also some dubious racial stereotypes that more than a few MRAs have called out.) And many of the Reddit commenters were quick to point out that attacking Planned Parenthood or even reproductive rights has never been a part of their movement. As one commenter said, “the outright falsification of the core values and goals of the movement was disgusting and completely unwarranted.”

Of course, SNL is a comedy sketch show and it was clearly a parody of MRAs. It wasn’t meant to be the movement’s manifesto. What’s more, despite all the complaints about the skit being spiteful, many Reddit commenters undermined any potentially legitimate arguments by painting Lena Dunham, feminists and women in general as unattractive and humorless, proving again that MRAs are their movement’s own worst enemy.

Some choice comments ranged from the mildly off-putting (“Sounds like something written by a bitter first year women’s studies student“) to the completely unrelated (“Ironically, having now learned that women hold jewelry parties, my respect for their sex has declined even further“) to the utterly nasty (“A bunch of unattractive unfunny women impugning a man for being not an apex male“). Apparently, the irony of labeling a group of real-life actors “unattractive” while calling out their made-up characters for doing the same thing in a comedy skit escaped a few of the more enraged commenters.

And while a few commenters did take heart that their relatively obscure movement, which is largely relegated to the dark shadows of the internet, received any sort of mention at all on national television, the threads themselves likely won’t help their case. In fact, newcomers who stumble onto the Reddit discussion after seeing SNL are likely to read some hilariously unhinged views and realize why MRAs warranted a parody in the first place. 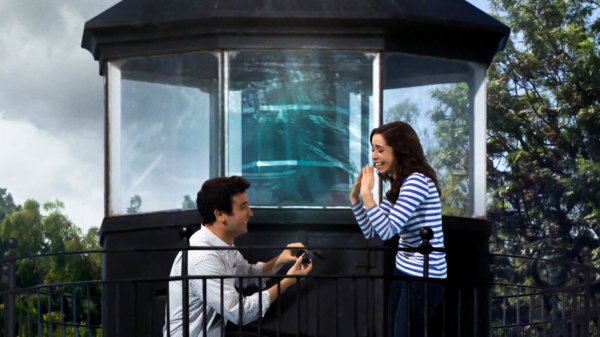 VIDEO: How I Met Your Mother Actress Calls Finale Conspiracy Theory "Crazy"
Next Up: Editor's Pick