Friendships have nurtured great art: Ernest Hemingway and F. Scott Fitzgerald championed each other’s literature in post-war Paris; Paul Gaugin and Vincent van Gogh pushed each other to new heights of Post-Impressionistic mastery; John Lennon and Paul McCartney blended their talents into songwriting classics; and Jay and Ye have established a hip-hop empire.

By Jay and Ye, I’m referring to hip-hop’s reigning kings, Shawn “Jay Z” Carter and Kanye West. West and Carter’s relationship is the subject of a University of Missouri class, “Jay-Z and Kanye West.”

The course is taught through the English department, and the instructor Andrew Hoberek compared the periphrastic rappers to poets in an interview with music blog Consequence of Sound: “I really do think that these guys are warming up to the level of major poets, and not many people think of it in those terms,” he said. “They’re very much like painters and novelists in the 20th century, moving beyond the confines of the art form’s boundaries.”

For people who aren’t rap fans, this may seem crazy (or, rather, cray), an example of the academy kowtowing to student demand for fluffier classes. But Hoberek makes a valid point. Jay Z and Kanye’s projects are now multidisciplinary, mingling visual and performance arts as integral elements of their albums and concerts, to a greater extent than their predecessors. And their collaborations inform their solo projects. All of this is worth exploring in an academic setting, even if it’ll make Harold Bloom hyperventilate over the ruination of the academy 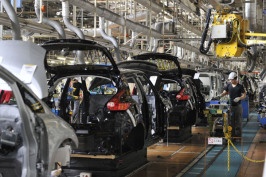 Watch the Surprising TV Ad That Got Nissan Into Major Trouble
Next Up: Editor's Pick