On the surface, the pictures of Japanese Prime Minister Shinzo Abe standing next to a stiffly saluting President Pranab Mukherjee during India’s Jan. 26 Republic Day parade look like the pomp of your average high-level diplomatic visit. But making Abe, who was on a three-day visit to New Delhi, a guest of honor at India’s annual display of military might was a carefully aimed move. As the camouflaged tanks, high-stepping soldiers and missile launchers made their coordinated way through the foggy capital, New Delhi and Tokyo sent a clear message to the world — and to Beijing in particular — that the strategic bond between these two Asian allies is strong, and getting stronger.

Abe, whose trip comes close on the heels of a visit last month from Emperor Akihito and Empress Michiko, was in India over the weekend to try and make headway on a potential civil nuclear energy agreement and what could be Japan’s first military equipment sale in decades, among other things. India has expressed interest in a Japanese-made amphibious aircraft, and the two countries have reportedly been working on the terms of a sale.

Both deals would boost trade relations, but the meeting also underscored an intensifying mutual interest between the two nations — namely keeping China’s military expansionism in check. During Abe’s visit, the nations signed energy and telecommunications agreements, but also agreed on regularizing joint naval exercises. On Jan. 25, Prime Minister Manmohan Singh made special mention in a media statement of the nations’ “expanding defence and security cooperation.”

Japan and India have a history of good relations, and this trip seemed to reinforce that goodwill as well as Japan’s ongoing investments in both infrastructure and business in India. Last year, Japan granted India $2.32 billion in aid for infrastructure projects and agreed to loan a further $753 million to help fund a metro system in Mumbai. During this visit, Abe announced Japan would loan India another $2 billion to expand the capital’s metro system, which Japan also helped fund. Japanese businesses have also been at the forefront of trying to tap the huge Indian market, with giants like Hitachi and Suzuki paving the way.

Chinese news outlets were predictably dismissive of the notion that Japan and India are growing politically closer. According to the BBC, several Chinese media outlets carried reports of Abe’s visit, but analysts quoted in the papers were skeptical that India could be persuaded to tighten strategic ties. “India’s main purpose is to obtain practical interests from Japan, and Abe’s wooing of India to resist China is more of his own wishful thinking,” an analyst at the China Institutes of Contemporary International Relations told the state-backed Global Times. 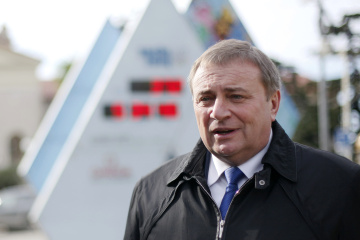 Sochi Mayor: No One's Gay in Our Town
Next Up: Editor's Pick