Does Anyone in the U.S. Still Go to Foreign Films? Yes. Indians!

You probably know about Blue Is the Warmest Color, the French movie with the lesbian lovers romping through a five-year affair. But chances are you haven’t seen it. For all its ballyhoo and bravas, Blue has earned only about $2.1 million at the U.S. box office. Given the high price of art-house tickets, that means only a couple hundred thousand people have paid to see it in its three-month American run — fewer than the number that bought tickets to Ride Along this past Tuesday.

These are hard times, maybe the end of times, for a kind of film that accounts for only about one in every 200 tickets sold in the U.S. But before we get to the depressing news about the current state of foreign-language films in the States, consider a time when this tiny niche was a tremendous niche — representing about 5%, not 0.5%, of the domestic market — and when foreign films were thought essential to any true cinephile’s education and appetite.

We speak of the 1960s. Giants like Federico Fellini, Ingmar Bergman, Akira Kurosawa and François Truffaut strode the earth; and their favorite actors — Marcello Mastroianni, Max von Sydow, Toshiro Mifune and Jeanne Moreau — became icons on this side of the pond. Mastroianni and the rest provided the best directors with faces and personalities that charmed the foreign-film audience across America. And soon other movies with these stars appeared in U.S. theaters. In the early ’60s, as many as 30 Italian films reached U.S. shores.

That’s because of the startling success of Fellini’s La Dolce Vita, which, in terms of tickets sold, is still the highest-grossing foreign-language film of all time. It earned $19.5 million in U.S. theaters in 1961, when the average ticket price was just 69 cents. In today’s dollars, that would be $236 million — more than the domestic gross of 2013 hits like Oz the Great and Powerful and Thor: The Dark World. In 1966, Claude Lelouch’s A Man and a Woman, a race-car love story starring Jean-Louis Trintignant and Anouk Aimée, grossed the modern equivalent of $107 million. Three years later Costa-Gavras’s political thriller Z took in what would be $92 million today. As the moguls would say, real money.

(READ: What Fellini meant to the movies)

Two quick reasons for the appeal of foreign-language films in the ’60s: They had a higher IQ than the average Hollywood movie — making works like Fellini’s 8½ and Alain Resnais’ Last Year at Marienbad the subjects of earnest debates at penthouse cocktail parties and on college campuses — and they were sexier, exposing flesh along with their vaunted angst and anomie. A third reason: they gave any American with cinematic wanderlust a view of other countries and cultures. Here were people and ideas so different, perhaps forbidding, yet often enchanting.

They could still reach a wider audience if they had a canny blend of sentiment and comedy — and if they were released by Miramax Films and its genius promoter Harvey Weinstein. The Mexican Like Water for Chocolate earned a healthy $21.6 million in 1993, The Postman $25 million in 1995, Life Is Beautiful an astounding $57.6 million in 1998-99, helped by a Best Actor Oscar for Roberto Benigni. In the last decade, though, it’s rare for a foreign-language film to top $10 million in the States. It needs to be based on a famous performer (La vie en rose, which won as Oscar for Marion Cotillard as Edith Piaf) or a famous literary property (The Girl With the Dragon Tattoo in its original Swedish version). For one French film, The Intouchables, it was enough that it was funny and touching, and released by Weinstein.

Once every few years, a foreign film’s very foreignness could make it a surprise blockbuster. Ang Lee’s Mandarin-language martial arts fantasy Crouching Tiger Hidden Dragon earned $128 million in 2001 (about $190 million in adjusted dollars). And in 2004 that amazing all-time fluke, Mel Gibson’s The Passion of the Christ, grossed $370.8 million. That would be nearly $500 million today, far higher than the North American income for 2013’s top two movies, The Hunger Games: Catching Fire and Iron Man Three. And The Passion wasn’t a sequel — just a sanctified splatter film, in Aramaic!

(READ: Corliss’s kind-of defense of The Passion of the Christ by subscribing to TIME)

You’ll find few glorious flukes, and hardly any hits, in the non-English-language films released last year. Here’s a reality-check list of the top 10 foreign films of 2013:

At first glance, the list has an attractive globe-straddling variety: six films from Asia and one each from Latin America, South America, the Middle East and Europe (the continent that used to spawn most of the exotic hits). The big champ was Instructions Not Included, Eugenio Derbez’s warm comedy about a guy raising his six-year-old daughter. Banking on Derbez’s appeal to the Spanish-speaking fans of his shows on the Univision network, Instructions earned $10.4 million in its first four days in just 347 theaters, for one of the strongest limited openings in domestic history. Well behind it, but filling five of the top 10 slots, were Bollywood musical dramas aimed at India’s Desi diaspora. They play in a couple hundred theaters and, without mainstream critics paying attention, earn more money than most American independent films.

(READ: How Instructions Not Included Won the Box Office)

The catch: To most of their viewers, Instructions and the Bollywood films are not foreign-language movies at all. The foreign-language market is back where it was in the 1930s and ’40s, when theaters in neighborhoods full of Germans or Greeks or Italians or Chinese showed German, Greek, Italian or Hong Kong films. They were “foreign,” because they came from abroad, but nobody in the audience had to read subtitles to understand them.

It’s true that, in the ’60s, hits like La Dolce Vita, A Man and a Woman and Z were released in versions with the dialogue dubbed into English; so to many viewers these were not foreign-language films. But Crouching Tiger and The Passion of the Christ earned their hundreds of millions the old-fashioned way: in the original language. No recent foreign-language film has earned even a tenth of the gross of those two smashes.

To gauge the foreign-film’s place in today’s America, we have to compile another list: of movies whose languages are truly foreign to most of their customers. Here’s what we got, from the 2013 releases:

Sad, isn’t it? Not that these aren’t worthy films, and from a wide swath of cultures, with Israel surprisingly landing three pictures in the top 10. But it’s not good that only Wong Kar-wai’s martial-arts epic The Grandmaster (another Weinstein release) earned as much as $6.6 million — about the same as the total gross of last year’s French-language Best Picture nominee, Amour. None of the others cadged as much as $2.5 million. The Gatekeepers, in second place, is a documentary about Israeli spies; No a political thriller starring Gael García Bernal; Renoir a portrait of the French painter; Love Is All You Need a multinational romance, with Pierce Brosnan as the man falling for a Danish woman in Italy.

At the bottom of the list is a gay comedy by Pedro Almodóvar, the great and accessible Spanish director. Since his breakout with Women on the Verge of a Nervous Breakdown in 1988, Almodóvar has been a favorite of the American art-house crowd, earning grosses in the $10-million to $15-million dollar range (in today’s dollars). He is also one of the last European auteurs whose name had marquee value as a guarantor of intelligent fun. Yet I’m So Excited! sold fewer tickets in the U.S. than any Almodóvar film in a quarter century, since before Women on the Verge.

If Almodóvar can’t sell a foreign-language film any more, neither can the community of movie critics. Last month the various critics groups named many different foreign movies as their favorites. Except for Blue Is the Warmest Color, none of those films appear on our list of top 10 absolutely-foreign movies. The Saudi Arabian film Wadjda would have been 11th, with $1.3 million so far. The rest, including The Act of Killing, Blancanieves, The Broken Circle Breakdown, Drug War, Mother of George and The Past — this last directed by Oscar-winner Ashgar Farhadi (A Separation) and starring Oscar-nominee Bérénice Bejo (The Artist) — have not reached $500,000, or 50,000 tickets sold in a country of 315 million people.

Is there hope for foreign-language films? Yes: in one movie that, curiously, won no prizes from the U.S. critics groups but did take the Golden Globe for best foreign picture and recently swept the European Film Awards (Best Film, Director, Actor, Screenplay and Editing). Paolo Sorrentino’s The Great Beauty is an update of La Dolce Vita, more than a half-century after the original. In a time of spare, minimalist European films, it teems with life, love, sadness, wit and a little sex. It is a reminder of what foreign films once were and could be: a vision of another culture, enticing, succulent and Other.

(READ: Mary and Richard Corliss on The Great Beauty)

After two months in U.S. theaters, The Great Beauty has earned about $1.3 million — not a paltry sum in these sad days, but it should do much better. Perhaps it now will: the Motion Picture Academy has nominated the movie for Best Foreign Language Film. It may even be the favorite to win. So go see The Great Beauty, if only to increase the chances of winning your office’s Oscar pool. But for better reasons: to expand the mind; to stretch the soul; to reconjure the challenges and joys of that endangered pleasure, the foreign-language film. 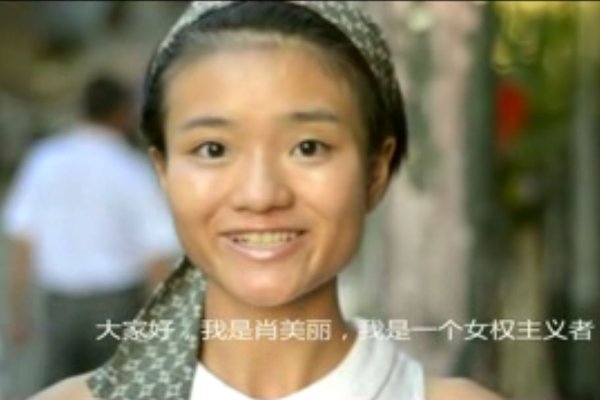 In China, a Young Feminist Battles Sexual Violence Step by Step
Next Up: Editor's Pick