Stranger by the Lake: Blue Is the Cruelest Color

At last year’s Cannes Film Festival, the big news was Abdellatif Kechiche’s Blue Is the Warmest Color. Under its original title La vie d’Adèle: chapitres 1 et 2, the lesbian drama won the top-prize Palme d’Or from a jury headed by Steven Spielberg, who called it “a great love story” that left the jury “absolutely spellbound.” Blue became instantly notorious for the intensity of several sexual encounters between its leading characters, played by Adèle Exarchopoulos and Léa Seydoux. At year’s end it was named best foreign-language film by most of the U.S. critics groups.

Blue screened in Cannes’ official competition. In the sidebar section, known as Un Certain Regard, the prize-winner was Alain Guiraudie’s Stranger by the Lake, a tale of gay men taking their sexual pleasures on a secluded beach, and paying for them. Graced with a few scenes of explicit sex, Stranger also received the “Queer Palm,” a critics’ award for the Festival’s best film with an LGBT focus. In other words, those in the know preferred the gay male movie to the more renowned gay female one. With the U.S. release of this tantalizing, elliptical film, curious moviegoers can decide for themselves.

(READ: Corliss’s review of Blue Is the Warmest Color)

Though both pictures describe the sexual relationship of a young person and an older one of the same sex, the movies are worlds apart in plot, tone and affect. Blue is a display of volcanic emotions filmed in intimate closeup; it means to draw the viewer into its heroine’s roiling heart and loins. Stranger, which plays out in little more than half Blue’s three-hour running time, has a luscious patina but a diffident spirit, often eying the action from a distance that keeps the spectator watching, frustrated and fascinated, like a voyeur or a sleuth. For Stranger is a mystery film about a man who happens to see a murder and wonders what to do about it. Call this a gay Rear Window, a Blowup on the beach.

On a lakeside in Provence (actually Moustiere Sainte-Marie) that might be the setting for one of Eric Rohmer’s tales of young love, gay men come to sun, swim and, in the wooded area above the beach, have sex with men they meet there. One of the regulars is Franck (Pierre Deladonchamps), a nice-looking young fellow who notices Michel (Christophe Paou), a slightly older stud type with a Tom Selleck mustache and a partner he often takes to the woods. Early one evening, as Franck heads to the parking area near the woods, he sees Michel and his friend swimming far out in the lake. Michel pushes the other man’s head underwater and drowns him. He swims back to the shore, dresses and leaves, without seeing Franck.

In Alfred Hitchcock’s Rear Window (1954), only a broken leg constrains Jeff, the news photographer played by James Stewart, from taking physical action against the murderer across the courtyard; Jeff’s ethical resolve is unequivocal. In Michelangelo Antonioni’s Blowup (1966), Thomas, the fashion photographer played by David Hemmings, comes to believe that the random snapshots he has taken in a park may reveal evidence of a murder, but his addiction to the hedonism of Swinging London distracts him from resolving the case.

(READ: How Antonioni blew up the movies)

Franck is closer to the Thomas character — beyond him, in fact, for Franck knows that he may be risking his own life by pursuing his attraction for Michel over the film’s 10-day span. (Each new day is announced by the same shot of the parking area.) In matters of sexual hygiene, Franck is fastidious enough to decline oral sex if no condom is available; yet he is reckless in accepting Michel as a partner after he’s seen the murder. He goes further, concealing his knowledge of the crime when quizzed by the detective (Jérôme Chappatte) who’s investigating the disappearance of the drowned man. By not speaking up, Franck demonstrates his loyalty to Michel — one the master, the other the submissive.

Even as he allows Michel to court him, Franck probably thinks he’s being cautious: he lets the older man take him into the woods for sex but not into the lake for a deep dip. Michel: “Want to go swimming?” Franck: “No.” Michel: “There are two of us. What can happen?” (There’s been a rumor that this lake has its own Nessie — a killer catfish as large as 15 feet.) Franck must be thrilled to flirt with a predator who can cruise him but not, he hopes, drown him. Yet Frank does go in, by himself — in a shot taken from the same high viewpoint as the murder — and then sees Michel swimming resolutely toward him… Cue the Jaws theme.

(FIND: Jaws on the list of all-TIME Top 25 Horror Movies)

Such a sonic explosion would be anathema to Guiraudie, a very modernist, minimalist European. His film has no music at all, either as an overlaid score or from the sunbathers’ radios or iPhones. Instead, we hear the sound of arms slicing through the cool water, the faraway murmur of male voices and, most distinctly and ominously, the rustle of wind through trees (another smart borrowing from Blowup). At the end, as the complementary blues of sea and sky surrender to darkness — and Franck walks into a trap that he has helped construct — the rising sound of the breeze could be a warning or a dirge.

To give viewers a window of context into this insular world, Guiraudie introduces three outsiders. Henri (Patrick D’Assumçao) is a paunchy fellow — he has the fat man’s habit of crossing his arms across his naked chest — who declares himself heterosexual but has come to the gay beach for male company and strikes up a friendship with Franck; he is the classic red herring (or catfish), the character audiences may think will pay off at the climax but doesn’t. The second is a gay voyeur, always with his hand in his pants, who creeps through the woods to see men have sex; he is the surrogate for those moviegoers who have come to see hot man-on-man action from film porn’s glory years in the 1970s, and who are bound to be disappointed. This is no Blue movie.

The third outsider is the detective, baffled by the seeming indifference of these gays toward one of there own who has vanished, perhaps been murdered. As he tells Franck and Michel, “You have a funny way of loving each other.” But love isn’t what the men seek: rather diversion, adventure, a quick blast of ecstasy without emotional encumbrance. Another Antonioni film, L’Avventura (a prize-winner at Cannes in 1960), was trailblazing for its narrative about a woman who disappears and is searched for but never found. Guiraudie pushes that further with the story of a man who is murdered but never mourned, and whose main character cozies up to the killer.

The movie’s original title, L’inconnu du lac, translates as “The Unknown of the Lake”: a mysterious presence that provokes frissons of fear. In the English title, Stranger can be both a noun and an adjective — as in, things keep getting stranger by the lake. Stranger, not gayer. The suspense tightens around Franck like a handsome man’s hand around his neck. The god of this cool, cruel, often mesmerizing film is not Eros but Thanatos. 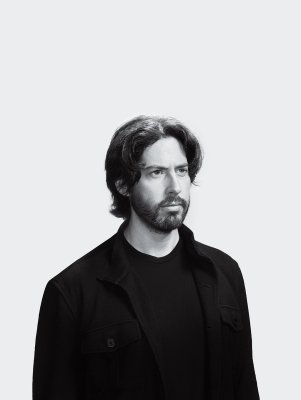 Jason Reitman Breaks from Comedy
Next Up: Editor's Pick