Vladimir Putin’s invasion of Ukraine is a gross violation of that nation’s sovereignty and an affront to the international community. His continuing occupation of Ukraine is completely unacceptable, and Russia’s President should be isolated for his actions.

It is America’s duty to condemn these actions in no uncertain terms. It is our role as a global leader to be the strongest nation in opposing Russia’s latest aggression.

Putin must be punished for violating the Budapest Memorandum, and Russia must learn that the U.S. will isolate it if it insists on acting like a rogue nation.

This does not and should not require military action. No one in the U.S. is calling for this. But it will require other actions and leadership, both of which President Obama unfortunately lacks.

I recommend a number of specific and decisive measures to punish Putin for his ongoing aggression.

Economic sanctions and visa bans should be imposed and enforced without delay. I would urge our European allies to leverage their considerable weight with Russia and take the lead on imposing these penalties. I would do everything in my power to aggressively market and export America’s vast natural gas resources to Europe.

I would immediately remove every obstacle or current ban blocking the export of American oil and gas to Europe, and I would lift restrictions on new oil and gas development in order to ensure a steady energy supply at home and so we can supply Europe with oil if it is interrupted from Ukraine.

Because of so many of our current needless laws and regulations, President Obama has left Europe completely vulnerable because of its dependence on Russian oil and gas.

I would support immediate construction of the Keystone Pipeline.

It is important that Russia become economically isolated until all its forces are removed from Crimea and Putin pledges to act in accordance with the international standards of behavior that respect the rights of free people everywhere.

We should also suspend American loans and aid to Ukraine because currently these could have the counterproductive effect of rewarding Russia. Ukraine owes so much money to Russia that America would essentially be borrowing from China to give to Russia.

The U.S. should suspend its participation in this summer’s G-8 summit and take the lead in boycotting the event in Sochi. If Putin’s troops remain in Crimea at the time of the summit, Russia should be expelled from the group.

I would reinstitute the missile-defense shields President Obama abandoned in 2009 in Poland and the Czech Republic, only this time, I would make sure the Europeans pay for it. The problem with the foreign policies of both Democratic and Republican administrations is that they never give a second thought to how America can afford what they implement.

America is a world leader, but we should not be its policeman or ATM.

At the end of the day, I still agree with former Chairman of the Joint Chiefs of Staff Mike Mullen — the greatest threat to America’s security is our national debt.

Russia, the Middle East or any other troubled part of the world should never make us forget that the U.S. is broke. We weaken our security and defenses when we print money out of thin air or borrow from other countries to allegedly support our own.

Like Dwight Eisenhower, I believe the U.S. can actually be stronger by doing less.

Like Ronald Reagan, particularly regarding Russia, I also believe, “Don’t mistake our reluctance for war for a lack of resolve.”

I stand with the people of Ukraine against subjugation and support their efforts to restore freedom. The Ukrainian people must be free to determine the fate and future of their own nation without unwarranted military or political intimidation from Russia.

Reagan’s policy of “peace through strength” requires strength of the sort President Obama now fails to project. But what some American leaders, including some in my own party, often forget is that lasting peace was always Reagan’s ultimate objective.

I have said, and some have taken exception, that too many U.S. leaders still think in Cold War terms and are quick to “tweak” the international community. This is true.

But mutual respect and practical diplomacy is a two-way street, where Russia or any other nation should not be tweaking us, or their neighbors, either.

The U.S., in cooperation with the international community, should respond to Russia’s aggression with action.

The Budapest Memorandum said that Russia wouldn’t violate the integrity of Ukraine, but now it has. There is no realistic military option in this conflict, at least for the U.S. But this does not mean there aren’t options, many of which I’ve outlined here.

The real problem is that Russia’s President is not currently fearful or threatened in any way by America’s President, despite his country’s blatant aggression.

But let me be clear: If I were President, I wouldn’t let Vladimir Putin get away with it.

Paul is the junior U.S. Senator for Kentucky 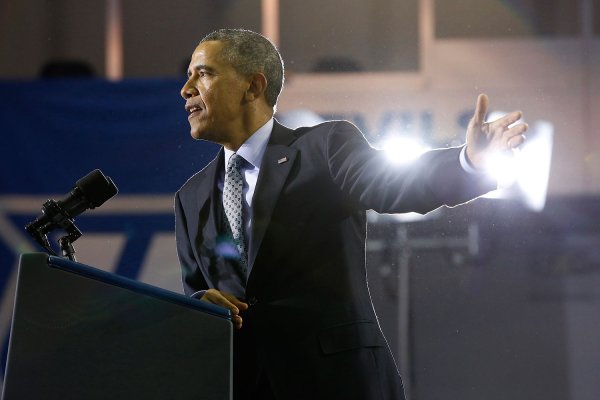