Afghan Vice President Marshal Mohammed Qasim Fahim has died of natural causes, the government announced on Sunday, and three national days of mourning will be observed.

The official Twitter account of Aimal Faizi, the spokesperson of President Hamid Karzai, stated that Kabul has called for the flag to be flown at half-mast during that time.

Fahim, 56, was reportedly suffering from diabetes and died as a result of illness at his home in Kabul, according to Tolo News. AFP reports Fahim was labeled a “ruthless strongman” who received U.S. support after the fall of the Taliban in 2001.

According to an official biography, Fahim was born in 1957 in Panjshir province in northern Afghanistan. He fought against the nation’s Soviet occupation alongside military leader Ahmad Shah Massoud. Fahim served as the head of the the nation’s intelligence service in the 1990s, and was appointed as first Vice President in 2009.

His death comes ahead of the planned withdrawal of most foreign troops in December, and less than a month before Afghanistan’s national elections take place. Voters are due to decide a replacement for the mercurial Karzai, who is constitutionally barred from running for another term.

President candidates Ashraf Ghani and Zalmai Rassoul both quickly expressed their condolences on Twitter. “I am deeply saddened & shocked by the news of Marshal Qasim Fahim, 1st VP’s, passing. My heartfelt condolences with his family and #Afg ppl,” wrote Rassoul, the former Minister of Foreign Affairs who stepped down from office to run for president this year. 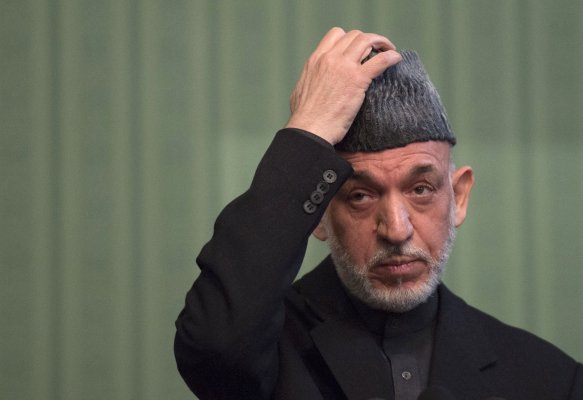 Afghanistan's President is Furious at the Way the U.S. Has Conducted the War
Next Up: Editor's Pick