Speculation is a largely futile exercise when confronted with a tragedy of the scale of Malaysian Airlines flight MH370. Yet conjecture is somewhat unavoidable when so many uncomfortable questions linger. The Boeing 777-200 vanished en route from Kuala Lumpur to Beijing early Saturday with 239 people on board. On Sunday, there was still no sign of a crash site, and the carrier admitted to “fearing for the worst.”

The 11-year-old aircraft, powered by Rolls-Royce Trent engines, took off at 12:40 a.m. local time from Kuala Lumpur International Airport and was due to arrive in the Chinese capital at 6:30 a.m. Weather conditions were good when it went missing without a distress call.

Some 40 ships and 22 aircraft —from Malaysia, Vietnam, China, Singapore and the U.S. — are so far involved in search and rescue operations, with Indonesia possibly joining the effort too. While no crash site was positively identified, two ominous fuel slicks stretching for 15 km were spotted off the coast of Phu Quoc Island in southern Vietnam.

“Our two rescue boats have approached the two oil spills since 3 a.m. today but we haven’t found any sign of the Malaysian plane yet,” Vietnamese Navy Admiral Ngo Van Phat told Reuters. “Other boats are ready to go to support if needed.”

The U.S. National Transportation Safety Board has also sent a team of investigators to Asia to assist with the investigation.

On Sunday afternoon, the director-general of Malaysia’s Department of Civil Aviation Director, Azharuddin Abdul Rahman, told a press conference that investigators were looking into the possibility that the plane turned around, and the search was being widened to include the western coast of Malaysia by Penang.

With minimal clear evidence, theories abound. If a bomb exploded then any fuel would have evaporated into thin air, says Captain Ross Aimer, an aviation consultant who was formerly an instructor for the 777. Moreover, “if it was an explosion or catastrophic failure in the air, thousands, perhaps millions of parts would be scattered all over the place,” he told TIME. “Given that nothing has been found, perhaps this isn’t [what happened].”

But then the lack of communication is even more puzzling. The plane was last in contact with air traffic controllers around 120 nautical miles off the east coast of the Malaysian town of Kota Bharu. Not only was there no mayday call from the cockpit, but the radar transponder did not register a problem.

An unnamed airline pilot told Malaysia’s New Straits Times newspaper that he had made brief contact with the plane, when in the air himself, via his emergency frequency after receiving a request from Vietnamese aviation authorities.

“The voice on the other side could have been either Captain Zaharie [Ahmad Shah, 53,] or [co-pilot] Fariq [Abdul Hamid, 27], but I was sure it was the co-pilot,” he said. “There was a lot of interference … static … but I heard mumbling from the other end. That was the last time we heard from them, as we lost the connection.”

Officials revealed Sunday that the Flight MH370 aircraft had suffered a clipped wingtip but this had been repaired by Boeing and the plane declared fit to fly. Even so, the 777 had “an extraordinary safety record in respect to millions of hours flown,” says Aimer. In the 19 years since its launch, the model have been only around 60 minor incidents before the Asiana Airlines crash at San Francisco airport in July 2013, which killed three passengers and injured more than 180.

Investigators have urged patience. When Air France Flight 447 disappeared while flying from Rio de Janeiro to Paris in 2009, it took two years to find the wreckage. Admittedly, though, waters around Malaysia are considerably shallower than the Atlantic Ocean. Says Aimer: “If there is wreckage they will find it.” 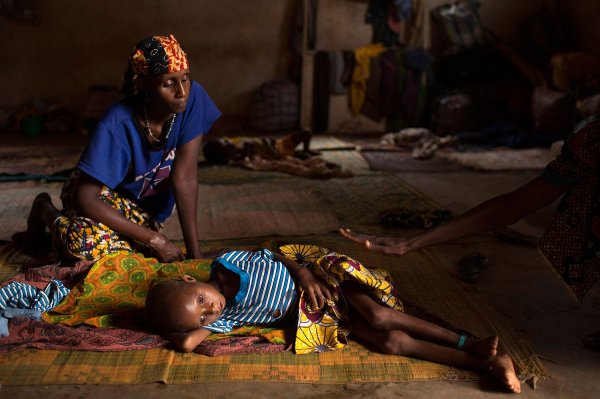 Nearly All Muslims Have Fled C.A.R.'s Capital
Next Up: Editor's Pick